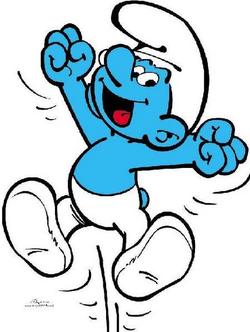 Since it’s unofficial Smurfs day here at TR, I thought I’d kick of the fifth and final of our new weekly articles?Fan Fiction Friday?with our little blue friends the Smurfs. Every Friday, I’ll be posting snippits of some fan-created naughty short stories for your enjoyment and horror. Why? Mainly because adult fan fiction is an incredibly easy target. And because if I have to do this, I’m going to try to share as much pain as possible.

As I said, the first installment is centered around the Smurfs, and one in particular who just doesn’t fit. The story is “Identiy Crisis,” and we begin after an unnamed Smurf?well, he’s just named “Smurf”?has decided to throw away the shackles that are his pants.

?I didn?t forget,? the smurf smiled back. ?I?ve decided that from now on, I would do away with the pants. I am proud of my body and wish to put it on display for all to see. You may call me? Nudist Smurf.? A whisper among the crowd, the name could be heard several times at different places. There was no consensus, everybody had their own theory about what had happened to the smurf to make the choice of nudity. But no one contested him either, just as he had expected. If anyone was to step in, it would be Papa Smurf.

Soon, the new Nudist Smurf hunts for sarsaparilla leaves with three other nameless Smurfs, when things take a turn…for the sexy. Yet another unnamed Smurf admits his desire for physical love, and a wary Nudist Smurf consents.

Smurf licked and sucked, making a slobbering noise. He licked the length of it, kissed it all around, sucked the tip and tasted the overflowing juices. With his hands, he rubbed the naked smurf, touched his chest, his thighs and even his butt cheeks. His breathing was loud and betrayed his lust for the smurf. Nudist Smurf?s mind had blanked for a moment, the overwhelming sensation of Smurf?s touch and mouth getting the best of him. He felt his knees weakening and grabbed his friend?s head in an effort to remain still. It made the gay smurf slip the cock deeper in his mouth, for which he didn?t mind at all. Unwillingly, Nudist Smurf?s hips starting bucking, wanting to keep his friend?s mouth more and more, deep the warmth as much as he could.

Read the whole thing here, if you dare. And if you’d like just one more (terrifyingly large) section, and the one that will put me in the shower all weekend, drinking scotch from the bottle and trying desperately to scrub the filth out of my soul, hit the jump.

The tempo increased as Nudist Smurf thrust faster into the moist mouth. He had never expected such a sensation, and had completely forgotten about where he was. The smurf could feel a tingle in his balls, the forecast of release. Smurf could see that his friend was nearing orgasm and he used his hands to help him, stroking the foreskin of the cock as he sucked the top of it. He could hear Nudist breathing more rapidly and deeply, moaning softly, lost in his world of lust. And the gay smurf wanted nothing more than to drink his love juices.

And finally he did as the nude smurf cried of relief and pleasure and came, shooting his load into the eager mouth of the smurf. His grasp on the head was tighter than ever and his hips bucked with every shot he sent. The gay smurf avidly swallowed the juices, enjoying the sweet taste of it. After the fifth, his tense body finally lost all of his strength and fell limp on the ground. The gay smurf crawled to his mate and cleaned the cock head with his mouth, making the other smurf giggle at the sensation.

?That was? I never felt anything like it,? the nude smurf said, still panting heavily, as the other smurf finished his clean up job.

?I have never been so aroused in my life,? the gay smurf said. ?I never thought this could feel like such a release. It?s like I?ve awakened from a long slumber and now I see everything differently. And it?s all thanks to you,? he added to the nudist smurf, kissing him on the cheek as he said the words. ?Thank you.?

?It was my pleasure.? Both remained silent for a long minute, and then something came to mind to Nudist Smurf. He looked up and saw the other two smurfs still standing, looking at them, entranced and voiceless. ?Did you enjoy the show?? he asked casually. The gay smurf, who had forgotten about the onlookers, now felt shy and tried to hide behind the nude smurf as he could. An erection could clearly be seen in his pants, as well as a small stain.