Since perversion-related industries makes up about 60% of the Japanese economy, it should be no surprise that many women (many, many women) get groped in Japanese subway trains. It happens often enough that a few men who accidentally bump into women’s T and/or A thanks to a jostling train car, which is often packed full to bursting anyways, are unjustly accused of groping. So what’s a Japanese gentleman to do? 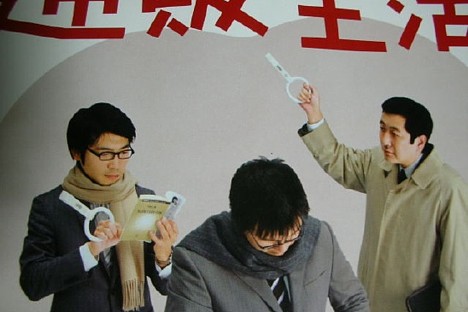 Buy a portable subway strap. About $5, this keeps your hands up, showing the lovely ladies around you that you have no interest in groping them illicitly (well, more likely that you can manage to refrain from groping them, despite your interest in doing so). Sure, you look like an imbecile, but it’s a small price to pay for excluding yourself from the vast army of Japanese men who use the subway as their sexual harassment playground. (Via Pink Tentacle)