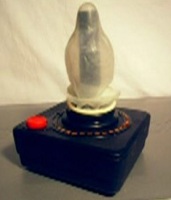 Sure, we’re all aware of pornographic (as pornographic as any pre-eight bit console can be, anyway) Atari games like Beat ‘Em and Eat ‘Em, Custer’s Revenge, and, well, any title released by Mystique. But few know that plenty of other Atari games exist that are, shall we say, more than meets the eye. Though it may be hard to believe, lots of titles disguised as ?general audience? or ?all ages? flew under the radar but were secretly getting plenty of pre-teenage boys’ rocks off with their hot pixel-on-pixel action. This list of unintentionally erotic games are titillating enough to give any unsuspecting gamer a BASIC erection.

The gamer controls a pair of DSLs (called ?Mighty Mouth,? no less) that have to catch various food items that fly across the screen. We’ll let the game’s cover art speak for itself here:

Also interesting to note is the fact that, during the game, Mighty Mouth has to ?avoid eating the purple pickles,? and that upon eating six purple pickles, the mouth burps and the game’s over. This just goes to show that one can indeed gobble too many nobs, and that if you are going to spend your evening fellating, stay away from the junk with funk (purple or otherwise), ‘cuz that shit be diseased, yo.

Centipede was the first arcade game created by a woman, and this dame clearly had dicks on the brain. The object of the game is to eliminate the long, winding centipede as it maneuvers down the screen.

We’ll overlook the multiple mushroom tips floating around the screen to instead focus on the phallic, wriggling member snaking its way to the protagonist’s dainty mothership. While playing a female-created game whose object is to shoot at a penile antagonist until it’s destroyed may seem a bit on the man-hater side, keep in mind that there are dudes out there who pay hookers to kick them in the balls because they find it arousing. This game is for them.

In this game, you control a smurf who must head to Gargamel’s house from the smurf village in order to rescue Smurfette. Apparently the smurf comes with an energy bar that depletes as time passes and if you hit various wimpy obstacles like fences and weeds.

Play-tested by a group of young girls (oh God, the inappropriateness can only get worse from here), Quadrun was a game with the objective of rescuing prisoners (called ?Runts?) from cages by using your ?special weapon.? The name of said weapon? Phaser balls.

So, basically this game’s objective is to repeatedly slap your balls against some enemies while at the same time trying to crack open a puckered butthole in the center and release a bunch of ?Runts.? It sounds like a post-Taco Bell run at a fraternity house.

Now, just use your imagination…

In this ghetto video game adaptation of Steven Spielberg’s feel-good family movie, E.T. has been turned into a green penis-blob and must drop into various ?holes? in order to get home. Clearly, Atari has turned the beloved Reese’s Pieces eating extra terrestrial into some sort of mutant Midnight Cowboy who must resort to whoring himself out to various giant-vagina’d women in order to afford a freaking telephone.

In Dig Dug, your objective is to eliminate little creatures by either inflating them until they pop (or, as we like to refer to it, giving them a hot beef injection) or by dropping rocks onto them (can someone say teabag?). Dig Dug gets to each conquest by digging long, straight tunnels and dropping down onto them; then it’s wham-bam-thank-you-ma’am before our little digger is off to hit some more ass, leaving his one-night-stand confused, vaguely ashamed, and with a burning sensation that won’t be discovered until peeing the following morning.

Released in 1983, the object of Alpha Beam with Ernie is to help Ernie (of Sesame Street fame) return to Earth by collecting fuel tanks marked by various letters of the alphabet for his rocket ship. Sounds innocuous enough…until you see Ernie’s rocket ship: