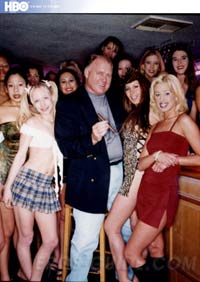 Anyone who is an avid connoisseur of HBO?s late night programming probably realized long ago that there?s a fair amount of knowledge to be gleaned from the likes of Real Sex, Cathouse (seen left with enterprising Bunny House pimp Dennis Hof), Pornucopia, Hookers at the Point, and the rest of the award-winning lineup (along with the boobies). The following are important lessons that will enhance your life and provide perspective as you navigate the murky waters of normal society.

Why is it that every fat girl on Real Sex seems to love squeezing into leather with the aid of some Country Crock and several shoehorns? It?s like a Saran wrap corset that accentuates every flaw. They might as well sell a Real Sex fat girl action figure that comes equipped with a whip and low self-esteem. Keep in mind that these chunky wonders are kinky precisely because they are fat. If you bag a chubby girl and marvel at how she’s willing to do the nastiest things imaginable with you, watch that kinky attitude disappear along with her waistline if ever she decides to take the Jenny Craig challenge?once she’s down to a size four, it’s missionary position and once-a-month blowjobs from here on out.

6) No Matter What Your Fetish, There’s Someone Weirder

Whenever you start feeling down about some sort of bizarre fetish of yours, just cue up some Real Sex on demand and you?ll instantly feel better. Pony Play, Golden Showers, and Electro-Stimulation are all totally acceptable and normal practices. And if you find yourself with someone who tries to disagree, then you, my friend, are with a prude. It?s simultaneously mind boggling and inspiring to see that two overweight rubber fetishists would somehow manage to find each other among the infinite sea of vanilla souls. This show clearly proves both that there?s someone for everybody, and that your attraction to women wearing Kabuki Masks isn?t as strange as you thought.

The one exception, of course, would be if you?re the guy from AC Hookers that paid one of the girls to take a crap on a plate and then proceeded to eat it, whom we desperately hope is the weirdest fetish out there. Even if you are going to dine on excrement, don?t eat hooker poop. For some reason it seems doubly unsanitary.

5) Trannies Are Hard to Spot When They?re Asian

This lesson is pretty self explanatory, but worth remembering when you?re trolling the streets of Hawaii looking for a hot ethnic girl to take back to your beach house. Since the ?Tranny Episode? of Hookers at the Point is pretty much a combination of dudes with boobs and very convincing looking girls with penises, the message is buyer beware. Just because you pass over three guys that look like Hank Azaria in The Birdcage doesn?t mean you won?t still be fooled by the Gong Li-looking hottie with a giant wang.

When in doubt, go white. You can spot a white tranny a mile away.

Although it shouldn?t really require a reminder, Taxicab Confessions proves definitively that copulating in the back of a cab will leave you contorted in angles and positions that would make even [add your favorite celeb names]bodies look kind of gross. When you couple that with the fact that your body is probably average and there?s a camera rolling at all times, the message would be to just wait until the ten-minute ride is over before jumping each other’s bones in a drunken humpfest.

3) Spending $3,000 at the Bunny Ranch Doesn’t Quite Get You Luxury Amenities

When you?re going to take your awkward 23-year-old goober of a son to the Bunny Ranch to purchase him a long overdo deflowering, you expect a few things. If you travel somewhere to spend $1,000 or more on sex, the hope would be that a portion of it would go toward some plush amenities and a four-star setting. Sadly, from watching Cathouse, you?d think leopard print and zebra strips were the height of luxury. It’s like having sex on the set of Rosanne. Sure, it?s not fair to expect The Plaza, but when the girl you hired is done sitting on your face you don?t want the first thing you see to be a mounted moose head. It taints the experience.

1) The Life of a Swinger is More Glamorous on Paper