Menu
Home
>
Anime
>
A Little Something for the Ladies

I’ve remarked several times that 40% of Japan’s economy is based on pedophilia in some for or another. Now I’m proud to announce that some of that 40% is because of the ladies. 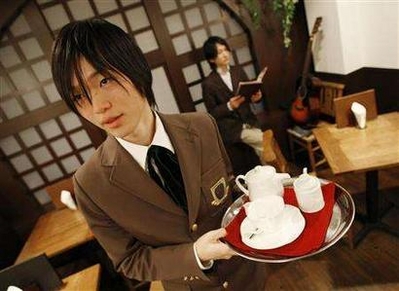 Japan has opened its first school boy cafe (much like the many, many, many maid cafes for lonely male nerds), for female nerds, according to this Reuters article:

In keeping with the schoolboy theme, waiters with manicured hands and soft voices pretend to be teenage students, chatting and flirting with well-dressed Japanese women playing the roles of benefactresses visiting the school.

At Edelstein boarding school, the schoolboys wear lip-gloss, the headmistress has a weakness for homoerotic comic books, and there is only one subject: how to serve female visitors.

Congrats, women of Japan! It’s been a long time coming.