Free Comic Book Day happens to be this Saturday, and comic lovers and cheap bastards alike are mighty excited. You would think Topless Robot would have a list of the Worst Freebie Comics of All Time to celebrate the occasion, but as it turns out, we’re kind of dumb, and ran that list a few months ago.

So we decided to celebrate the “gateway drug” nature of the event?that comic makers hope kids get hooked into buying the harder, full-priced stuff?by ranking those comics that were similarly designed to get kids to spend money on toys. Back when kids actually purchased comics, toymakers could hawk their wares in a discrete fashion without worrying about violating silly old broadcast regulations. Many rose above the mundane task and created characters and plots more complicated than backyard play; more often than not, though, most crapped out a thinly disguised shill piece crafted by what seemed like a group of hung-over people on the last day of their deadline. So take a gander at the five best and worst toy tie-in comics of all time; it’ll pass the time until you get those free comics on Saturday (you cheap bastard). 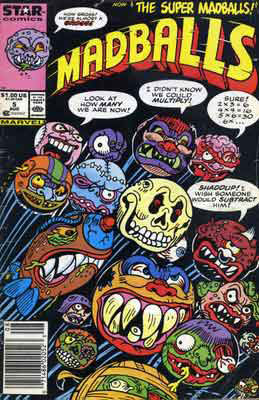 Surprisingly enough, it?s not the story of young men and too much gold bond powder? Madballs were a series of face-shaped tennis balls, made to capitalize on the ?gross fad? started by the Garbage Pail Kids by being as disgusting as possible. If you’re thinking it might be hard to create a story about a group of balls (that isn’t toally X-rated), you’re right?a clearly not-trying Marvel just emulated the ?Smurfs template,” where a Gargamel-esque bad guy pursued the happy-go-lucky albiet disgusting balls for his own nefarious purposes (we’re not sure what they were, but any man that desperate for balls is clearly up to no good). Hilarity ensued, in theory. Despite the ball jokes we’re able to make as adults, the results were wholly unremarkable and actually beat the Care Bears comic for a spot in this list. 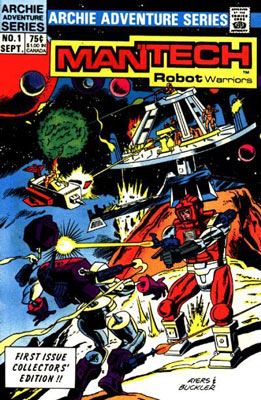 Although the title suggests an adult website with a lot of mustaches, ManTech was actually a crappy toy line from Remco looking to catch some heat from the robot craze of the eighties. It?s the story of three astronauts who get their heads grafted onto robots (like you do) in order to fight other robot bad guys. The fact that all the robots looked like they were made out of cardbpard boxes (even in the comic) didn’t help matters.

The Archie team produced this magnum opus; surprisingly the ManTech crew never had a lot of dating and wardrobe storylines. These brave warriors didn?t seem to get along that well, but I guess you?d be irritable too if your genitals were replaced with high quality AC Delco parts. 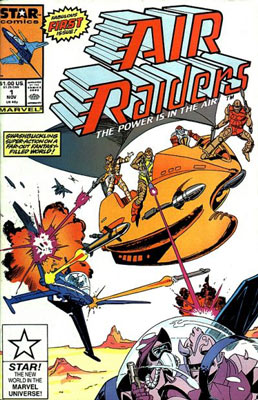 When the setting in a comic titled Air Raiders is a place called ?Air Landia,? you pretty much realize that this isn?t going to be another Lord of the Rings. Air Raiders was a mid-’80s toyline by Hasbro that never really achieved much notoriety. The figures were 2-inches tall and the real star of the line were the vehicles, so kids really didn?t give a shit about the good Air Raiders struggling against the evil ?tyrants of wind,” who should have had evil farting power, but didn’t. It would have helped. 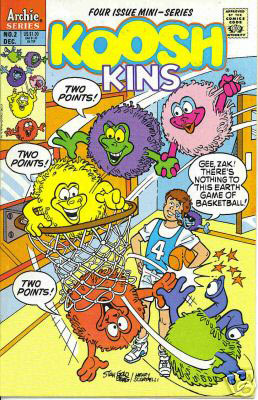 Not learning it?s lesson from Madballs, Archie comics produced a series based on Koosh Kins, a spin off the Koosh Ball (those annoying things Rosie O?Donnell used to throw at people). The Koosh Kins adventures are a truly cringe-worthy experience, as these balls greatly enjoyed hip-hop and loved pizza to a degree that would made even The Simpsons’ Poochie hang his head in shame. The comic was so predictable in its blandness it can cause murderous rage even today.

Long before he became an Internet joke, Chuck Norris was a comic book joke. Based on the ’80s Kenner toy line, Karate Kommandos followed Chuck as he fought the good fight against (admittedly awesome named) Super Ninja and his army of, well, ninjas, who would come at Chuck in single file fashion, as was sporting.

What?s most disturbing about these comics is what seems to be the constant stroking of Norris?s ego; characters in the background would constantly notice him and say things like ?Whoa, he sure looks tough!? The villains were so terrified of the title star you wonder why they even put on their ninja pajamas on in the morning. In one story, two ninjas argue as to who is to shoot Norris, one remarks ?Are you kidding? That?s Chuck Norris, one bullet won?t stop him and we won?t have time to shoot two!?

The biggest crime in all of this is the artist on these issues is Spider-man?s co-creator Steve Ditko, a man who shouldn?t even have knowledge of a comic of this poor quality. 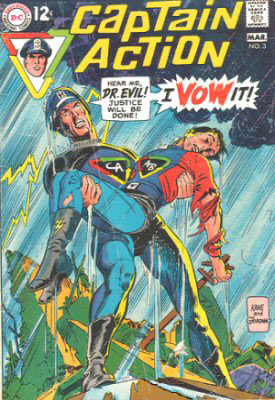 Captain Action was a sad-faced late ’60s action figure whose main power was having an extensive wardrobe, which included costumes of better, more powerful heroes like Superman, Spider-Man or Steve Canyon (no Mary Worth, sorry). Comic legends Wally Wood and Gil Kane put out a five-issue series of stories based on the doll but removing the quick-change element. The duo pushed the envelope in terms of artwork and over the top drama as the Captain and his lamentably named son Action Boy, battled against Grandpa, a pre-Mike Meyers Dr. Evil. The last issues of Captain Action?s run read as if everyone involved knew they were being canceled, so let the psychedelic imagery flow. 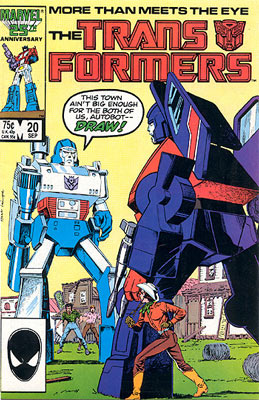 In the ’70s, Marvel took on the Japanese robot toy line Shogun Warriors as a comic and had mild success; it was only logical they?d be on board for another comic based on another toy line cobbled together from Japanese robots. The Transformers comic started as a four-issue miniseries, but lasted another 76 as fans ate up the heroic Autobots’ crusade against the Decepticons. The only drawback of this well-written, incredibly drawn series is the readers have to provide their own transforming sound effect, which requires a lot of phlegm. 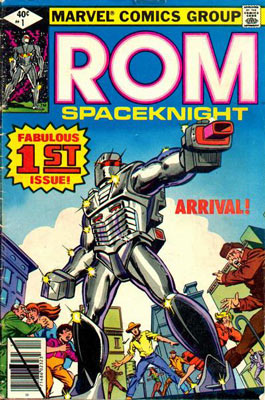 Parker Brothers made a cool but somewhat nondescript electronic action figure in 1979, and Marvel Comics was there to fill in the much needed back-story. Rom was a Space Knight from the planet Galador who arrived on Earth to stop an invasion by the shape changing Dire Wraiths. The toy was a flop, lasting only one year, but the comic written by Bill Mantlo was a surprise hit and continued on for the next seven. 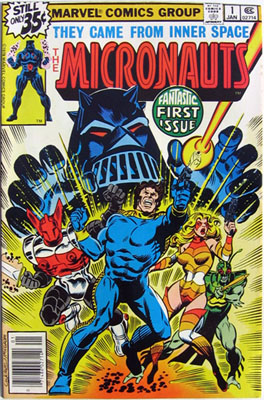 Bill Mantlo had another success for Marvel (which makes us forget Air Raiders) in the Micronauts, based on the Mego toy line. The original figures were released intentionally without a back-story; Mantlo and artist Mike Golden fashioned the Microverse, a tiny pocket of the Marvel Universe that was under siege by the evil Baron Karza. Space Glider Commander Raan and his ragtag crew worked against the body-part-stealing madman in their ancient space cruiser, the Endeavor.

The Mego toy line fizzled in 1980, but might have survived longer if they had released figures based on this enormously popular comic. The Micronauts have been revived several times since then but none have the magic of the original five-year run. 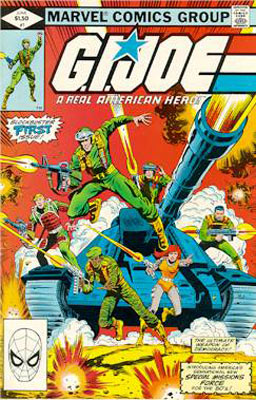 When Hasbro brought G.I. Joe: A Real American Hero out in 1982, they did it with a TV advertisement for a comic, which had never been done before. It was a clever way to skirt toy industry advertising regulations, but kids who bought that first issue got treated to a great read. The first G.I. Joe comic is a template that a dozen other toy manufacturers have tried to emulate ever since. Larry Hama crafted a believable set of characters and put them in compelling paramilitary adventures. It made you forgive the laser guns and Cobra-La action of the subsequent cartoon series. The goodness of this comic will be the reason so many fan boys go postal when the movie arrives.