The 4th edition of the Dungeons & Dragons role-playing came recently came out, and some of the older fans have bemoaned the lack of proper alignments, the loss of certain classes like the druid, and so forth. But there?s only one thing truly missing from the newest D&D: whores.

Yes, whores. In the very first edition of Advanced Dungeons & Dragons, Gary Gygax and company knew full well that any halfway decent fantasy world would be full of whores in tight corsets and willing to fuck any PC without an N. Why, you couldn?t swing a bugbear without hitting a whore in D&D?s glory age?but Gygax soon realized that after the bugbear hit the whore, what kind of whore would she be? Obviously, more information was necessary. 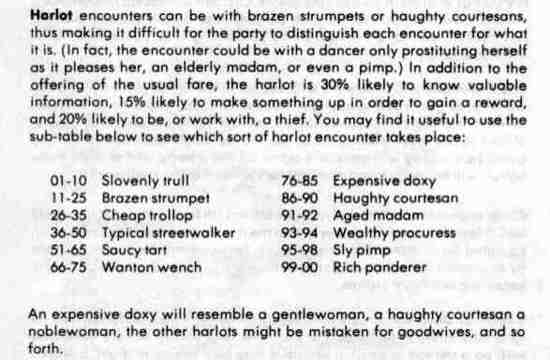 So Gygax made the above, totally batshit-insane and absolutely true Random Harlot Table, so that Dungeon Masters could know what kind of whore their adventurers had encountered (shockingly, this table was dropped from all future additions of D&D, alas). Because of our deep, abiding love for both D&D and whores, TR takes a closer look at the 12 different harlots one might randomly encounter.

A trull is just another synonym for prostitute, so we have to focus on the ?slovenly? here. Frankly, there a lot of adjectives they could have picked to describe this breed of whore?dirty, messy, filthy even?but slovenly indicates this whore has an utter contempt for her own appearance and well-being, and is likely covered in filth. There is absolutely no way the Slovenly Trull does not have some kind of venereal disease. Should your character drink too much mead and decide to pay up the two coppers and insert his wang into the Slovenly Trull, only a critical success on a Saving Throw will prevent his penis turning black and falling off in 1d4 days.

Strumpet is usually more associated with sluts than professional prostitutes, so I say the Strumpet?who shocks others with her brazen desire for sex?is probably the D&D representative of the town fuck. She?s probably not a hottie, and likely looks a bit rough around the edges, having been hollowed out by fighters, thieves and mages of a variety of levels and sexual proclivities. The Brazen Strumpet loves the sex?or the fake feeling of affection it generates before her companions go off to storm the nearby castle ruins?and will make sure to mention this in every conversation. It?s also likely that she?s willing to have sex with a 10th-level fighter and all the followers he gains?at the same time.

A trollop is just a prostitute, so if you?ve rolled a Cheap Trollop on the whore table, congratulations! You?ve just randomly encountered a cheap lay. Of course, Cheap really only refers to her price (which should still be above the Slovenly Trull?s bargain-basement sale); the reason why the Trollop is cheap is up to the Dungeon Master. Is the Trollop homely, and unable to charge more? Are there so many hookers in the area that market prices have forced her to discount her price? Does she just have a poor grasp of finance, and doesn?t know what her fucking is worth? Your imagination is your only limit!

As the name indicates, this is your standard, average prostitute. She will be sexy but not necessary attractive, and sex is purely a business transaction for her. She will charge you her standard price (likely to be in the high silver or low gold range, depending on the economy of the fantasy world) even if she wants to have sex with your dashing 6? 6? fighter-mage personally, just to maintain her professionalism. Roll 1d2 after fucking the Typical Streetwalker: if you rolled a 1-2, you have chlamydia; 3-4, you have gonorrhea; 5-12, you?re safe.

Although still a sex-worker, the Saucy Tart is different from the Typical Streetwalker by having a personality; she?s smart, funny, and will inevitably cause awkward feelings among your players who will fall kind of in love with the character, and would totally treat her right if she were real, and believe she?d probably love them too. Your standard hooker-with-a-heart-of-gold is likely to be a Saucy Tart, assuming she joined the prostitution trade willingly; if she didn?t, then she probably just cries a lot when she?s alone.

Wench also implies sluttiness more than professional fucking, and the wanton confirms it?the Wanton Wench is actually Ye Old Nymphomaniac. She has no sexual boundaries, and her desire to be drilled overcomes her common sense and all social taboos, and will fuck any class, any race, any level. She has been fucked in a 10 by 10 room by an orc guarding a chest?over the chest, actually?and, although she?s not proud of it, she?d do it again if she had to.

Doxy is just a fancy (and fancy sounding) word for prostitute, which works out very well because an Expensive Doxy is pretty much an Expensive Prostitute. Although there could be the same kind of economic shenanigans that inversely affect the Cheap Trollop, chances are the Expensive Doxy just works for a high-class, well-known and reasonably disease-free call girl service, much like Heidi Fleiss ran and Eliot Spitzer enjoyed. This, along with the fact that the Doxies are almost certainly gorgeous, means they can be Expensive, and their high-class clientele (basically, anyone above 15th level) are happy to pay the price.

A Courtesan is a well-respected whore, which can mean a few things. 1) The Courtesan can be a royal position enjoyed by the King, or someone of similar statue. 2) Depending on the society, Courtesans can even be a legitimate and honored position in society (think Inara from Firefly, Whedon-ites). Unfortunately, as Gary Gygax has decreed, no matter the situation, all Courtesans in all Dungeons & Dragons worlds are haughty bitches. Unless your character is the King, the Courtesan will only tell her guards to beat the shit out of you while she sneers or gives one of those obnoxious laughs that some anime girls do when they?re being evil. If you?d like to use a non-Haughty Courtesan, you have to play a different game. It?s in the rules for a reason, okay?

The Aged Madam is not likely to do any fucking herself, which is good, because she?s Aged and that would be really weird, even for a fantasy role-playing game. Instead, the Aged Madam runs some of the other whores listed in this table, and could very well be the one brokering the transaction between the PCs and the fuckery. By the traditions of Western storytelling, Madams will most likely run a whorehouse instead of having their employees on the streets, and the overhead for the commercial location will likely mean the Aged Madam is selling services from Expensive Doxies or at least Typical Streetwalkers.

A Procuress is the exact same thing as a female pimp or a Madam, so there are basically two types of Madams you can encounter?rich or old. I don?t know if the Madams start as Wealthy Procuress, get old, lose their gold pieces and become Aged Madams, or if you have to be an Aged Madam for awhile before you make enough money to become a Wealthy Procuress (and are still old, but no one mentions it because you?d be rich and can hire the Assassin?s Guild to kill whomever you please). Alas, poor Gygax passed away before he answered which comes first. I do have hopes that the eventual D&D Advanced Whore Sourcebook will explain such mysteries.

While the word Pimp always implies a male, there?s no real reason that your Sly Pimp can?t be a woman?it is a magical world beyond imagination, after all! However, since there are already two female prostitute-pushers on the table, the Sly Pimp might as well be male. Unlike the Aged Madam, he will almost certainly have his girls work on the streets and in the taverns, having no centralized area of commerce. Also all Pimps must be Sly; all this really means is that they must be clever, so your Pimps can be cruel (slapping their hos on slow nights, or for ?sass?) or kind and generous (?Here, buddy?take two gold pieces, go fuck Beckee and don?t tell her I told you to. She?s just been feeling unattractive lately, so I think this?ll cheer her up.?).

The male equivalent of the Wealthy Procuress, his wealth most likely lets him also own a whorehouse, where he could be selling anything. Most men don?t get into the pimping business because of their strong feelings on women?s rights, so its entirely possible he?s selling a dilapidated house full of Slovenly Trulls, although he could be running the Haughty Courtesans? Guild as well. When the Sly Pimp gets enough experience points to become a Rich Panderer, his large-brimmed hat automatically gets him +2 to his armor class, and his cane gets +1 damage to women in general and +2 damage against hos in specific.