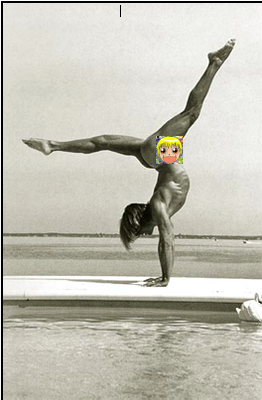 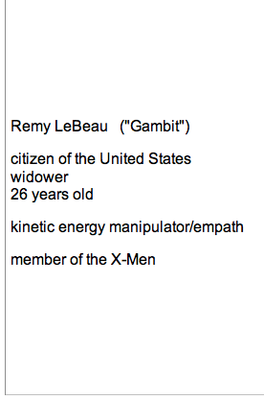 So when I was searching for pics of Avengers last night for today’s Daily List, I came across a wonder. It’s not fan fiction, per se; and it’s not exactly fan art, either. It is absolutely bat-shit crazy: some enterprising young nerd has taken it upon him or herself to find pictures of nude models to represent the X-Men and every other mutant he/she can think of. You can see a playful Gambit above.

Now, that would be weird by itself, but the project has its own little fiction?that a mutant named Marie Sinclair wanted to make a coffee table book of nude mutant photography. As Cyclops puts it in his introduction (I swear I am not making any of this up):

Three years ago, a gamma-level mutant refining her powers at the Xavier Institute embarked on a project to photograph members of the various alpha-level mutant militias. She was uniquely suited to do so, having both light-manipulation as her mutation and intimate access to the alpha-levels at home. The project began with the permission of team administrators, on the condition that no one would be pressured into being photographed against his or her will.

To date, everyone who has participated has been satisfied with the results. Most of the pages devoted to individuals have been produced in collaboration with those individuals, and nothing currently appears without the participant’s consent.

I’m sure Marvel will be glad to know Jubilee didn’t pose nude against her will. Anyways, it’s really just an insane excuse to post a lot of pictures of nekkid guys and gals with X-Men names and a list of mutant powers next to them. Frankly, I’m stunned. If you want to see 40 pictures of nude models in various states of undress?it’s totally NSFW, obviously?and there are a few penises, just so you know?who are supposedly mutants ranging from the original five X-Men to nth-tier mutants like Marrow and Husk?by all means, check it out. I’m going to beat myself unconscious with a scotch bottle.