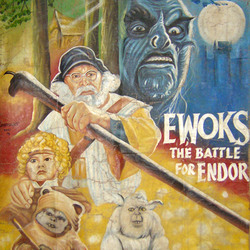 Being a Star Wars fan used to be easy. There were the movies, some books, a comic series, and of course, the toys. Nowadays, it?s easier to be a ?Fan of Star Wars? rather than a true ?Star Wars Fan.? Die-hards need to keep up with several different mediums including e-comics, guidebooks, online content, an asinine amount of books and graphic novels (many of them insulting and trite), and now a computer-animated television series is slated for later this year. This is all very time consuming, and keeping up with the Skywalkers ain’t cheap, either.

This landfill of books, comics and other ephemera makes up what is known as the Star Wars Expanded Universe; essentially, it’s any Lucas-licensed product that is not a part of the six Episodes. With over 30 years of none-movie stories being told, it should be no surprise that some of this content is pure bantha poodoo. So for those interested in taking their Star Wars fandom to the next level, or for those already trapped in the Sarlacc pit of non-canon Star Wars stories, here?s a quick look at the worst the EU has to offer. (And no, the Holiday Special doesn’t count.)

This 2008 novel is the latest SW adventure that deserves its own seat in the Shit Senate. Why? Well, just read this excerpt from the back cover of this genre-bending tale:

?Jax Pavan is one of the few Jedi Knights who miraculously survived the slaughter that followed Palpatine?s ruthless Order 66. Now, deep in Coruscant?s Blackpit Slums, Jax ekes out a living as a private investigator, trying to help people in need while concealing his Jedi identity and staying one step ahead of the killers out for Jedi blood. And they?re not the only ones in search of the elusive Jax. Hard-boiled reporter Den Dhur and his buddy, the highly unorthodox droid I-5YQ??

And there we have to stop, lest I go mad with rage. Yep, author Michael Reeves has used the limitless possibilities of the Star Wars universe to tell a shitty, run-of-the-mill hardboiled detective story in, with a Jedi private eye at that. I pray that somewhere in this novel Jax runs into Sam Spade who slaps him around before snatching his blaster and embarrassing him in front of I-5YQ. 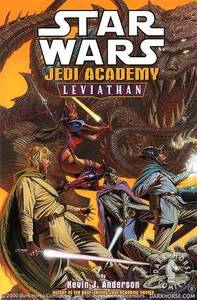 After the fall of the Empire, Luke starts up the Jedi Academy on Yavin Four and all types of hijinks ensue, explored in countless books and comics. But in this particular throw-away adventure from 2000, Luke and a handful of his pupils (including the minstrel Tionne and an old prospector named Streen) travel to the world of Corbus where a mining excavation has awakened a slumbering evil, which happens to be a clich?d, uninspired monster story we?ve seen a billion times before transplanted into the SW Universe. But that’s not the real problem. The real problem is the Leviathan itself:

The Leviathans were bioengineered serpentine sithspawn created by fallen Dark Jedi during the Hundred-Year Darkness. Living superweapons, leviathans roamed battlefields and drew the life-energies of enemy soldiers into blister traps that dotted their wide backs. When they killed a being, they could absorb all of his knowledge. They also could travel through lava unscathed.

Yes, the Leviathan is basically a Sith dragon that eats souls, which is absolutely the most evil thing an 8-year-old could possibly imagine. The rest of us aren’t as impressed.

In the early ’90s, Dark Horse Comics attained the rights for the SW franchise. Their first foray in the Galaxy was the Dark Empire series, which continued the story of Luke ?n? Friends post-RotJ. Awesome, right? It has Luke turning to the dark side to stop a reborn Emperor (who cloned himself into a new, young Aryan body) which collectively blew our nerd minds right out the backs of our heads, and seemed like the SW movie sequel we’d never get.

Now that we’re older, we can see the flaw in the story?specifically, the Clone Emperor. Not only does he pull some seriously bogus shit when he bends space and time using a ?Force Storm” to capture Luke, but why the hell would the Emperor?who walked with a cane and was gorilla-slammed by Vader into a shaft?not put himself in a young clone the minute it was available? What the hell was he waiting for?

Most franchises in the ?80s eventually shat out a cartoon in order to sell more toys and that?s exactly what SW did with the Ewoks cartoon show. Running from ’85-’86, it followed the mediocre Saturday Morning formula and featured Wicket saving the day every episode. The staple goofy villains of the show were the naked, Grinch-looking Duloks who were led by the lice-infested King Gorneesh. Through 35 episodes Wicket palled around with Teebo, Latara, Shodu, and a doofus shape shifter named Mring-Mring, who was the king of the Gupins until he was outcast for being born without wings. Basically, it’s the sort of story you tell a particularly stupid child at bedtime…if you’re drunk and want to get back to playing videogames. (Seriously,get drunk and Google ?Gupins.? It?ll cheer you up).

4) The Domestic Tranquility of Han and Luke 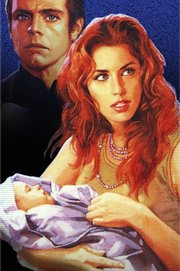 In the EU, Han marries Leia (surprise) and Luke marries Mara Jade (ex-chief assassin of the Emperor and now Jedi Master, naturally). Both couples have kids. Both couples get really, really annoyingly dull. They have guests over for dinner. They fight with their children about dating issues. Granted, on their own the characters still have depth and are damn interesting (Han goes berserk after the death of Chewbacca in the novel Vector Prime), but this married shit is like ever bad family sitcom ever written. Here?s an excerpt from the novel Betrayal:

?Zekk?s not a guest. He?s the man chasing my daughter all over the galaxy.?

?I think-? Han paused and looked around the table, finally aware of all the eyes on him. He plunged his fork into the last piece of spiceloaf on his plate and hurriedly swallowed the piece of meat. ?I think I?m done. I think I?m going to wash some dishes.?

Not exactly the battle of Yavin, is it? Seriously, if these lovebirds are in a novel, then a good percentage of the chapters end with ?Oh ,You? moments; ?Same old Han,? Leia thought. ?Always a politician,? Han said to himself. “I saw this in Eight Simple Rules for Dating My Daughter,” thought the reader. 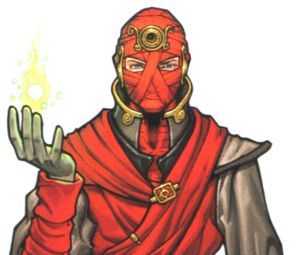 The Expanded Universe is full of new characters, some good, some evil, many of them hot alien Jedi chicks (especially in the comics). But none are more wretchedly awful than Rokur Gepta, from the 1983 novel Lando Calrissian and the Mindharp of Sharu. Gepta is a Croke; a species of multi-legged slugs from the planet Crakull in the Unknown Regions of space. The Croke are crazy good magicians (nothing to do with the Force) who can use their slug-magic to disguise themselves as full-size humans. Gepta does so and infiltrates a coven of Sith-friendly sorcerers on the planet Tund. This slug-bastard then annihilates all of them, which obviously makes the Emperor go ?What?s up??

Palpatine (who, despite being a Sith Master, cannot see through the slug?s illusion) gives this conjurer an Imperial cruiser and the authority to supersede all Imperial government and authority. Gepta uses his insane power to con Lando into trying to steal the Mindharp of Sharu (which is used to call back to life the Sharu; humanoid slaves who built some plastic pyramids, obviously). Lando figures his shit out and has a laser duel with Gepta in the vacuum of space. Homeboy shoots Gepta in the ankle (where the slug is hiding), destroying Gepta?s fa?ade. Lando crushes the slug in his hand, heads back to the Falcon and pounds a Colt 45, well-deserved after starring in this incredibly convoluted and ridiculous story. 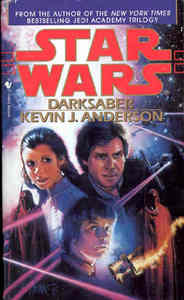 In ?92, Timothy Zahn?s masterpiece novel Heir to the Empire was released which reasonably seamlessly continued the story of SW beyond Return of the Jedi. Once Zahn proved that SW could be lucrative in novel form and crack the bestseller lists, pandora?s box was opened. I?m not sure the exact amount of novels that have been published since Zahn?s masterpiece, but the classic-to-crap ratio is insane. So many re-hashed plotlines which blur together keep coming up that should make fans slap their foreheads and say ?Another $7.99 down the toilet!?

Take for example Darksaber by Kevin J. Anderson (who, in defense, is a great author that manages to capture the pace and feel of the original trilogy). In this 1996 novel, Bevel Lemelisk, chief engineer of the original Death Star, designs a new superweapon known as Darksaber. This time, he?s working for dirtbag Durga the Hutt (like Jabba, but with goals beyond drug smuggling and strippers). The former Rebels stopping a superweapon that threatens the galaxy?!?! No shit! Still, it’s hard to ignore that the big villain of the book is a fucking civil engineer. He doesn’t have a blaster. He’s not a Sith. He’s just got a drafting table, and as such, watching the New Republic scrambling to find him is akin to watching a town meeting discussing zoning issues on your local cable access channel. (Incidentally, for more an equally boring protagonist, check out Fall of the Sith Empire in which a hyperspace cartographer manages to foil the sinister plot of a Sith Master).

1) The Ewok Adventure and Battle for Endor TV Movies

These two gems take place somewhere between Episodes V and VI, and fuck knows where in relation to the Ewoks cartoon. The Ewok Adventure (1984) was originally intended to be a one hour television special, but was then extended to two hours when Lucas himself decided to spearhead the project (probably shitting himself over having another Holiday Special debacle). The movies revolve around the Towani family, a run-of-the-mill nuclear family who crash on Endor while on their way to a Space Costco. In Adventure, brother Mace (not Windu) and sister Cindel must gain the trust of the Ewoks to help rescue their parents Jeremitt and Catarine from the giant, axe-wielding Gorax.

In the sequel, Battle for Endor, Jeremitt is abducted by reptile-humanoid King Terak who is in search of ?The Power? (which has nothing to do with Greyskull or the Ark of the Covenant, but is instead the hyperdrive from the Towani?s busted shuttle). In league with Terak is sorceress Charal, who looks like an ugly Anjelica Houston and can turn herself into a crow using a magic mood ring. The movie also features a bipedal, bucktooted-rodent-dwarf named Teek who has a righteous metabolism and is homeboys with Wilfred Brimley. That?s right, Wilfred Brimley (who I have honestly never seen in anything else except old-people insurance and Quaker Oats commercials). Brimley plays the cranky-old hermit Noa, who cooks biscuits and plays the recorder. He fucking hates Ewoks at first but then teams up with them to raid Terak?s castle and get that ?Power? back. I could keep going, really. I?m just typing out what literally is in the movies. Look, just go buy the double feature DVD at Target. It?s like 8 bucks.