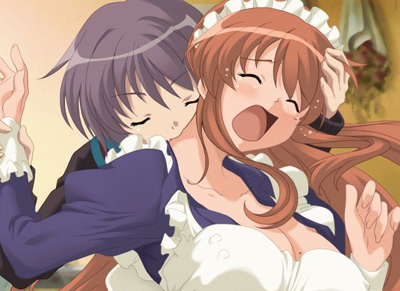 Two caveats about this story. First, it comes from a small blog I don’t know, and links to a Japanese news page I can’t read, so it could very well not be true, although I thought it fun enough to post just in case. Second, there are probably thousands of Japanese men who want to marry anime characters. What makes this guy different is that he’s petitioning the government to allow him to do so.

Seriously?he’s trying to get one million signatures, in order that he can marry Mikuru Asahina, the large-chested girl (not to be confused with the medium-chested girl or the small-chested girl) from The Melancholy of Haruhi Suzumiya. The blog points out two significant problems with his wish: first, Japan doesn’t allow polygamy, so only one person can marry each anime character; also, Japan gives taxes breaks to married couples, which means people who married anime characters would receive an unfair tax benefit.

The problem of these people being fucking crazy is not listed, but I’m going to assume it’s unspoken.