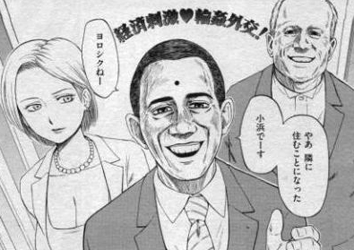 The fake Obama does indeed gets his hands on a Japanese maid in the story, but more terrifyingly, Aso has sex with the chick on the left, who some have theorized could be Hillary Clinton. You know, I’m genuinely terrified of what’s going to happen in the comments now that you guys have this information, so I’ll just remind you all not to be horrible and hope for the best.