For three glorious seasons, Star Trek‘s Captain James T. Kirk boldly seduced and explored women no Earth-man had been with before. Well, okay, some of them were from Earth, but Starfleet’s greatest discovery was that no women anywhere in the cosmos could resist the intense gaze and oft-exposed, tanned pecs of the Enterprise’s head honcho. Who can blame them, really? Of the many, many seduction committed by James T. Kirk, here are the 8 most impressive (not most exotic, which would totally include the green Orion Slave Girl, but this doesn’t, because Kirk had no problems getting under her Orion’s belt), which deserve to be recorded in the Captain’s Log for all eternity.

It didn’t matter if Ruth was a tangible fantasy, pulled from Kirk’s brain and based on an old flame from his Starfleet Academy days. She wanted him bad, and Kirk was happy to remain on vacation for a few extra days to spend some quality time with his new imaginary friend. Who cares about exploring new solar systems when you can explore the stars in a hot blonde’s eyes?

7) Rayna Kapec from “Requiem for Methuselah” 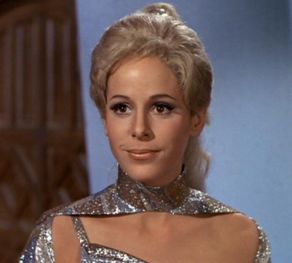 Rayna was an android created by the immortal Flint, who saw her natural attraction to Captain Kirk as the path to becoming a convincing emotional being. Unfortunately, Flint realized he wanted her for himself, and the resulting confusion over whether to love her creator or the beefy-hot James T. Kirk was too much for Rayna’s android-brain; it short-circuited, KABLOOEY! But still, it proved Kirk could even woo the pants off robots. Watch out, Data!

6) Shahna from “The Gamesters of Triskelion”

Kirk was captured by yet another alien threat who forced humans to compete in gladiatorial combat for their own alien amusement, and the butt-kicking, green-haired dominatrix Shahna was tasked with teaching him how to fight. Of course, she fell in love with him, which didn’t help matters when the two were forced to battle. Kirk made her submit in more ways than one, then blew her off when she wanted to come with him on the Enterprise. Damn straight; that’s the way you do it. Playa don’t need that kind of commitment. This was notably another instance where an exotic female unfamiliar with “this strange concept you call love” was drawn to Kirk and schooled by him. Perhaps a few of the Star Trek writers were living vicariously, hmm?

5) Kelinda from “By Any Other Name”

Kelinda wasn’t even humanoid. She was an alien scout who took on the form of an exotic human female and was new to the world of emotions. She quickly figured out what Kirk was doing when he started hitting on her, but also realized she quite liked it. Boo-yah! Kelinda even kinkily discovered that apologies were a major turn on for her, after Kirk admitted he was sorry for punching her out earlier in the episode (long story). She and a male representative of her race then decided to remain human and go apologize to each other a lot, thank to James T. Kirk, Intergalactic Love Counselor.

Deela was the insanely hot queen of an alien race who all became sterile and were banished to an accelerated timeframe due to radiation poisoning. Ahh, you gotta love how people in the 1960s thought nuclear radiation could do so many crazy things besides cause cancer. Clad in a jaw-droppingly revealing dress, she forced Kirk to join her in her timeframe, which made him invisible to the rest of the Enterprise crew while they appeared as unmoving statues to him. And why did Deela do such a thing? Because she needed to mate with him, of course, since Kirk’s loins were the obvious salvation of her race. Once again, Kirk got to live out another sci-fi nerd sex fantasy scenario. Kirk initially fought his fate, which would have the unfortunate side effect of accelerating his death, but in the end gave in to lust and ran off with Deela to get busy in his quarters. Thank god the rest of the Enterprise crew were on the ball and saved him from his hot chick-blinded dilemma.

3) Miramanee from “The Paradise Syndrome”

This had to be a new height of seduction for Kirk. While suffering from amnesia, he managed to convince Miramanee and her tribe of space Indians that he was a god named Kirok. Miramanee happily married the “god” and became pregnant. Unfortunately, her people stoned her to death because Kirk really wasn’t a god and couldn’t figure out how to use a magic obelisk to stop an asteroid from slamming into the planet. Oops.

Kirk had a battle on his hands with Elaan of Troyius (Helen of Troy, duh) when he was tasked with teaching this spoiled but beautiful and strong-willed princess a thing or two about manners in order to salvage a diplomatic mission that involved her getting married. He came at her like a drill sergeant, barking orders, and the two ended up smacking each other around. Kirk even threatened to spank her! Yowza! But Elaan fell for him, as Kirk was pretty much the only man who had ever stood up to her and tamed the shrew. And she used her magical tears to send him into a love frenzy. Kirk broke her spell, but knew he could never forget her, or she him. Due to the insane level of difficulty, Elaan was a great conquest, even if Kirk didn’t intend her to be one. (But you know he did.)

1) Edith Keeler from “The City on the Edge of Forever“

Kirk’s greatest conquest was also his greatest love. Edith Keeler was a forward-thinking, 20th Century social worker whose ideas of peace were passionate enough to change the world for the better. She also happened to look like Joan Collins. Edith was one of the few of Kirk’s women that seemed to be on his level, and even came across as being a little out of his league. But the two truly loved each other, making it totally heart-breaking when he had to let her get hit by a car to ensure that humanity would have a future. This loss is probably why Kirk went on to have a long string of meaningless flings with space babes.