Star Wars is the most important thing ever to happen on this or
any other planet. It brought together people from all walks of life, taught
them to live in perfect harmony and bought them all a Coke. Okay, maybe not. It
was a pretty big deal though. In the late 1970s, the demand for anything and
everything Star Wars meant that you simply could not escape the film.
From fast food restaurants to newsstands, Han, Luke, Chewie and the rest of the
Star Warriors were everywhere. The flick was even marketed in doctor’s offices
thanks to the classic R2-D2 and C-3PO immunization poster that was to prepubers
what the Farrah Fawcett one was to older folks of the era. Inevitably, Star
Wars fever spread to the pop charts quicker than Chlamydia at Plato’s
Retreat. After Meco released his disco version of the movie’s theme, aspiring
musicians around the world decided that Star Wars was their ticket to
fame too…with various results. A flood of quickie records peripherally and/or
explicitly related to the movie soon followed. Some of these were brilliant,
though most just were hacky re-recordings of the score by sub-par session
musicians. Instead of looking at the crap ones, let’s instead focus on awesome
LPs featuring songs about Darth Vader on a respirator and funky Force jams.
Here’s a look at the eight wackiest/greatest albums that drew their inspiration
from George Lucas’ space opera.? 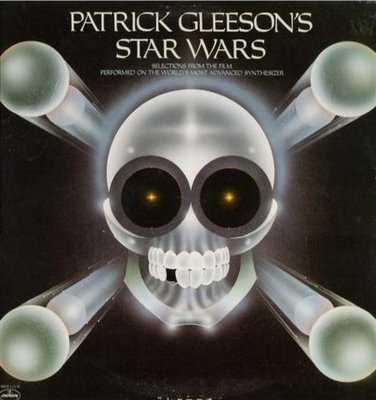 Electronic music pioneer
Patrick Gleeson hopped aboard the Star Wars musical bandwagon with this 1977
effort that gave John Williams’ score a synthy makeover. The highlight of this
album–which awesomely was also released on 8-track–is “The Tatooine Desert.”
A complete electro freak-out, the tune sounds like the best Rush Moving
Pictures-era B-side you’ve never heard. Listen to it while staring at the
freaking skull adorning the cover and you’ll soon find yourself in the land of
Jawas and blue milk.

Being an uncultured galoot,
my primary knowledge of jazz comes from the Ray Ellis tunes and KPM Music
Library cues that were showcased in the 1960s Spider-Man cartoon. So it’s
with a bit of nerd shame that I admit that I am also unreasonably fond of this
jazz reworking of The Empire Strikes Back score. Those of you who know a
thing or two about the genre will probably find it interesting that respected
performers like Ron Carter and Bob James (the creator of the depressingly epic Taxi
theme song) perform on the LP. The rest of you can just enjoy its smooth
takes on Empire‘s best-loved musical selections. Knowing how ridiculous Star
Wars Expanded Universe crap is, I’m sure there’s probably some book out
there that explains how the events depicted in the cover art transpired. Please
don’t tell me how in the comments or I may weep. Also, putting a drink in front
of Darth Vader is just fucked up and cruel. 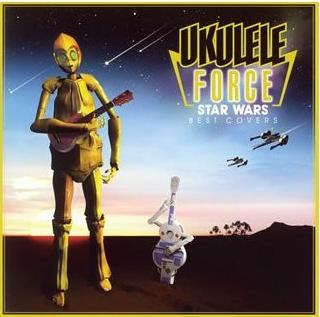 The Aztec calendar ends in
three years, and chances are that Quetzacoatl is going to come back and fuck
things up for all of us. When he does, I sincerely hope that this release’s
ukulele rendition of the Mos Eisley Cantina theme plays across the planet as
the world burns. It would be the perfect coda to the human experience and all
the joys and suffering that came with it. As for the album, it was released in
2005 by the absurd geniuses at Japan’s Geneon Entertainment. It’s an expensive
import, but sometimes you have to pay for brilliance, no?

In 1979, British R&B/funk
outfit The Real Thing had some international success with their album Can
You Feel the Force? The title track is a dance floor classic that allegedly
drew its inspiration from Han Solo’s favorite hokey religion. With lyrics
boasting that “people who make war are making love again” and that “this could
be the dawning of another time,” the song is packed with so much groove that
you can imagine Owen and Beru getting it on to it. Eww. The rest of the tracks
on the release have zilch to do with Star Wars, so unless you are really
into Kool & The Gang soundalikes you’ll probably want to stay far away from
it. Better run for shelter, better run for shade indeed.

In March of 1998,
musician/designer/culture jammer Morgan Phillips released an album of catchy Star
Wars songs under the name Supergenius on his newly formed Suckadelic label.
The CD was completely unauthorized and is therefore totally awesome. The best
tracks? “A Bobadelic Remix” features audio clips of Boba Fett’s appearances in The
Star Wars Holiday Special and The Empire Strikes Back accompanied by
a funky beat, and the sitar-heavy soundtrack of “The Wisdom of Yoda”
compliments the Jedi Master’s roots in Eastern mysticism. For live
performances, Phillips dons a Mandalorian-styled helmet and cape. That’s
wonderful. Further cementing his reputation as the coolest nerd in the galaxy,
he continues to oversee his Suckadelic empire and its various musical projects
and “bootleg” resin figures of pop culture icons.

3) Star Wars and Other
Galactic Funk

Despite having a name that
makes him sound like a Marvel Comics character, Meco Menardo ranks just behind
John Williams as the second most successful Star Wars musician. After
becoming enraptured by the original film, he decided to create a disco mash-up
of the main title theme with the music from the Cantina sequence. The resulting
“Star Wars Theme/Cantina Band” single was a number one smash that still gets
airplay on 70s radio stations. The album Star Wars and Other Galactic Funk features
that chart-topper along with Meco’s renditions of other selections from
Williams as well as some space-themed originals. The success of this project
resulted in Meco musically tackling the other films in the original trilogy as
well as blockbusters ranging from The Wizard of Oz to An American
Werewolf in London. Seriously.

2) Christmas in the Stars

Have you ever wanted to hear
C-3PO rhyme “wookie” with “cookie?” Me neither, but thanks to Christmas in
the Stars you can. God help you, you can. Clearly not learning anything
from the disaster that was the Star Wars Holiday Special, George Lucas
hired the aforementioned Meco Menardo to produce this concept album about a
group of droids manufacturing gifts for Santa Claus. (Apparently outsourcing
elves is acceptable behavior in a galaxy far, far away). Whether you want to
chalk it up to the vocal performance of Anthony Daniels throughout the album or
the goofy fun that comes from hearing R2 whistling “Sleigh Ride,” somehow the
album works. In fact, no holiday party is complete until “What Do You Get a
Wookie for Christmas (When He Already Owns a Comb?)” is played. The urban
legend that Jon Bon Jovi performs on the album is indeed true–his uncle
co-produced the LP–but don’t let that bit of nepotism keep you away from its
charms.

1) Living in These Star Warz

Mixing elements of R&B,
disco and rock, Living in These Star Warz is the best bit of musical
nonsense ever committed to vinyl. Released by a shadowy quartet known as The
Rebel Force Band in 1977, the defiantly unauthorized LP includes songs that
alternate between cheesy and awesome. Mainly awesome. Key tracks include the
cautionary tale “Don’t Fall in Love with an Android,” the insanely catchy “Chewie
the Rookie Wookie,” the funky “Respirator for Darth Vader” (complete with lame
sound effects) and the pensive “The Ballad of Obi Wan (OB 1).” A snapshot of a
time when everyone was caught up in Star Wars mania, this album is a
nostalgic look at the enduring magic of the original trilogy. Do you still
think Lucas raped your childhood? Then throw this on and be transported back to
an era when it seemed like we all were Living in These Star Warz.