The Smurfs are loved by children the world over as wholesome, la-la-la, friendly little blue creatures who live in a magical land. But there’s a not-so-Smurfy side of Smurf Village, where the typical defining traits of the Smurf denizens represent the shadier side of human nature. Now, TR has previously covered the disturbing Smurfs whose very natures raise questions about Smurf society, but now we’re just thinking of the children — and how they should never be allowed to get their hands on these figures, culled from 45 years of Smurf toys made by German company Schleich. Much thanks to Bluebuddies for the pictures. 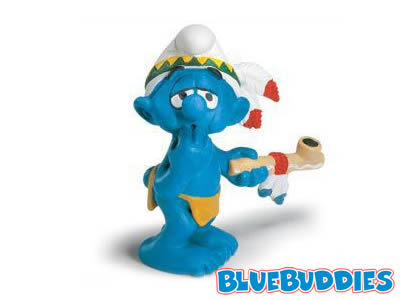 ?
Schleich’s recent collection of Native American Smurfs included Peace Pipe Smurf. Ceremonial use or not, this droopy-eyed Smurf looks like he toked something pretty strong from the herbs in that pipe! 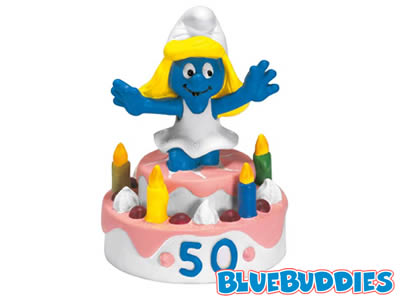 ?
To celebrate 50 years of Smurfs, Schleich released a figurine of Smurfette jumping out of a giant cake. Thankfully, they neglected to depict the next scene where her white dress flies across the room and lands on Papa’s hat.

?
The Angry Black Smurfs were never released in the U.S,. and they were changed to purple in the cartoon series, most likely as not to offend any hyperactive American sensibilities. And some people will likely try to read into it that the Smurfs were displaying racial insensitivity. Which is pretty silly, since what the black Smurfs are actually meant to represent are plague-ridden zombies! (It all started when a Smurf got bitten by a black fly.) Determined to spread their infection to other Smurfs through biting their asses tails, the angry Smurfs are clever enough to paint themselves blue in an effort to sneak up on unsuspecting victims. It’s an awesome premise, but probably pretty horrifying if you’re five. 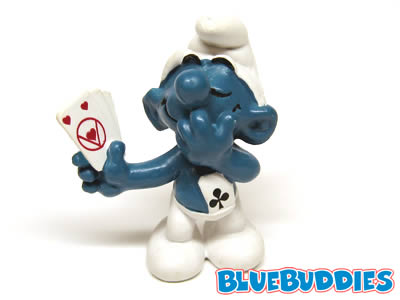 ?
This Smurf teaches kids that cheating at Poker is a great big laugh, and is even pretty obvious about it, ready to stack the deck with the card stuck in his waistband. Also known as Gets The Crap Beat Out of Him by Angry Gamblers Smurf. 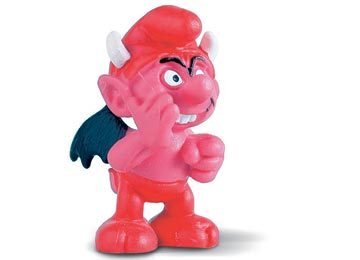 ?
All bad little Smurfs beware! Devil Smurf waits for your little blue, eternal souls if you Smurf your life up cheating at cards, getting sloshed or doing some of the other fun adult activities mentioned on this list.

7) Have A Drink On Me Smurf 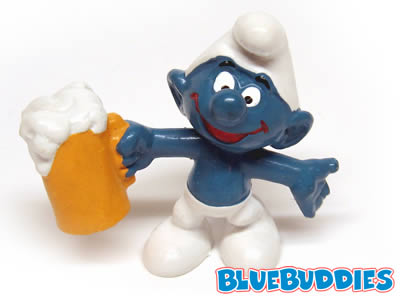 ?
I wonder what the drinking age is in Smurf Village? This Smurf must be old enough, and his smile shows what a great time you can have throwing back a few foamy brewskies. Heck, he would make a perfect spokesman for Budweiser, enabling them to reach an ever younger demographic than they did with the Bud Bowl! 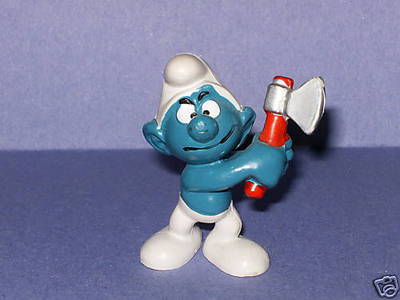 ?
Okay, he’s really Woodcutter Smurf. But the way he’s brandishing that axe and the crazed expression on his face make him look more like Jack Nicholson in The Shining. “Here’s Smurfy!” 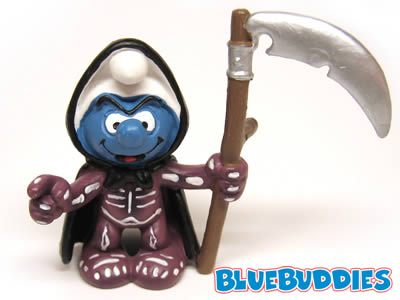 ?
If it wasn’t enough to know there’s a Devil Smurf waiting for you in the afterlife, here’s the guy who’s gonna place his cold, blue grasp on your life and take you there! 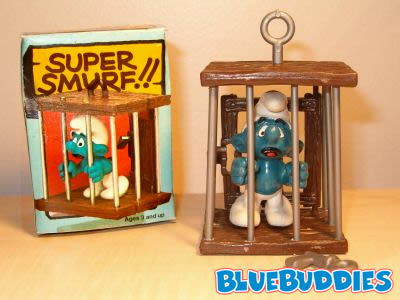 ?
The happy, secure place that Smurf Village is supposed to be is regularly shaken asunder by the evil sorcerer Gargamel, who wants nothing more in life than to snatch up a few of the friendly blue creatures to either eat or turn into gold. Neither way is an especially pleasant fate for the Smurfs, such as this little caged guy who is crying his eyes out as he awaits his terrible demise. 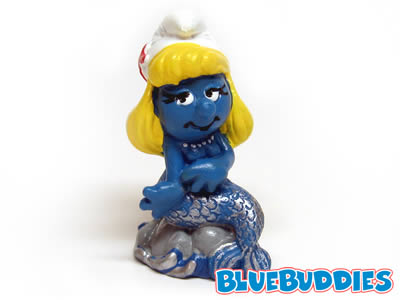 ?
Shockingly, this mermaid Smurfette doesn’t even bother to cover herself up with a couple of clam shells, letting her blueberries swim free. She’s not completely bare, though; she’s wearing a pearl necklace. 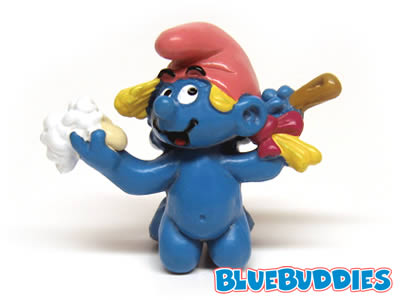 ?
I’m sure that the strangeness perceived in most of these Smurfs has a bit to do with varying cultural norms. What isn’t a big deal in Germany might cause an uproar in the States, for example. And maybe some of it has to do just with having a sick mind. But it’s hard not to think “WTF?” when you see this figure of a very naked female child Smurf giving herself a scrub. 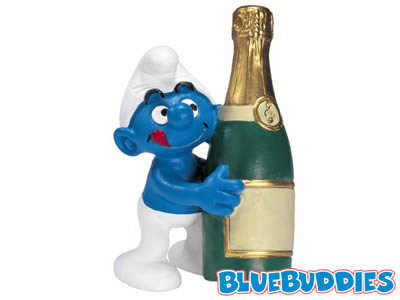 ?
First we had a beer-drinking Smurf, but this one prefers harder liquor. Not just prefers, but SMURFS it, as evidenced by him licking his chops and lovingly embracing a champagne bottle almost twice his size. Those Smurfs like to party!