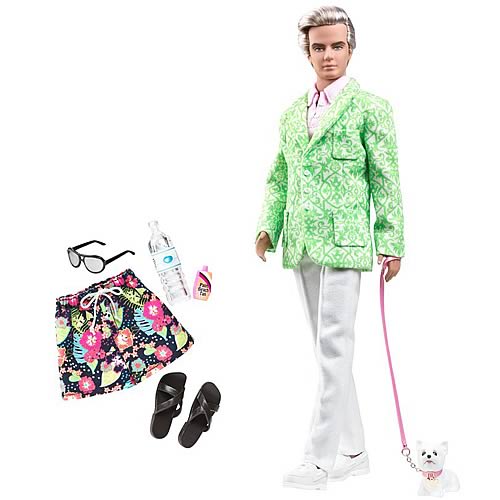 ?
Forget everything else. There’s only one subject worth discussing in the national consciousness, and that, of course, is Mattel’s Palm Beach Sugar Daddy Ken. Some of you doubted that the figure — which we now know to come with the above accessories, including bermuda shorts — to be real, just because Mattel doesn’t update its Barbie site for shit. Well, a Mattel spokeswoman has indeed confirmed the doll as 100% authentic, and, in addition, explained the horrible, depraved story behind the toy’s name to the New York Post:

“The ‘Palm Beach Sugar Daddy Ken’ is actually part of the adult
Barbie Collector Line,” the spokeswoman said. “It is targeted toward
adults.”

And before anyone thinks the “Sugar Daddy” title
refers to an older man with a younger lover, Mattel says that there’s a
much more innocent explanation.

“The little dog’s name is
actually Sugar,” said the Mattel spokeswoman. “That’s where the name
comes from. He’s Sugar’s daddy, as a reference to the dog.”

Obviously, instead of giving money to teenage girls for sex like a normal sugar daddy, Palm Beach Ken has gone the more twisted route of fucking a dog and then raising the resulting puppy as his own. As twisted as that is, the most deviant aspect is that he calls the dog “Sugar.” No wonder Barbie never seems to hang around him anymore. (Via Geek Girl Diva)