Menu
Home
>
Merchandise
>
Hey, the New Nerdcore Calendar Is Out 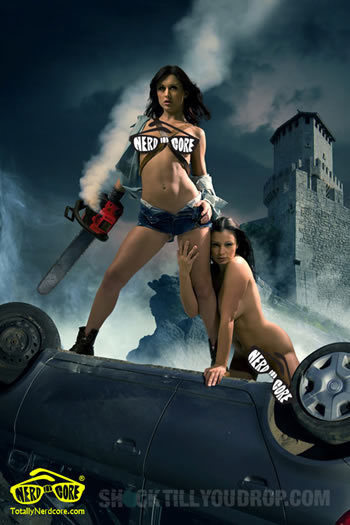 ?
Oh, you know Nerdcore, right? The calendars of naked ladies in various states of nerdery? the first one was themed around videogames, then sci-fi, 2009’s was superheroes, and next year’s will be great moments in horror — just recreated with naked ladies. My personal favorite is the Carrie one — I seem to have a largely unexplainable attraction to women covered in blood — but I thought you guys might enjoy the Army of Darkness one more. You can see several more pics over at io9, or the uncensored ones — minus a few — over at the oh-so-NSFW Fleshbot. The calendar is a scandalous $25 and can be ordered here.