Menu
Home
>
Merchandise
>
Oh Stephanie Meyer, What Have You Wrought 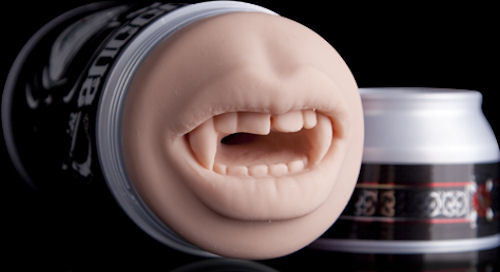 ?
Yes, that’s a vampire Fleshlight –the “vagina in a can” sex toy used by lonely men whose hands have apparently stopped returning their calls. I admit I’m a bit confused, since although the characters and fans of Twilight love not having sex before marriage, those are 99% girls, right? (I’m not saying there are no male Twilight fans, I’ve just never heard of one). But this — called the Succu Dry, by the way — is clearly for boys with penises. Is this like the self-loathing consolation prize for guys whose girls are waiting to be married to a vampire before they give up the goods? Because that’s pretty fucked up right there. Seems like you’d want the many, many, many non-vampire cans to stick your penis in instead of the vampire one. But I don’t really want to stick my penis into any can at all. Perhaps if I did, I’d have a different perspective on things.

Here’s a fun game: Watch this Twilight clip and try to pretend that Edward does not have his penis in a Succu Dry during it. You can’t, can you? No thanks to Gorbash, destroyer of worlds for the tip — and god forbid, but you can order the Succu Dry here. Please, please don’t tell them I sent you.