I don’t need to tell you faithful Robot’s Voice readers that geek culture (and its asthmatic brother, nerd culture) have invaded American entertainment at all levels. What used to be whispered about only on Dungeons & Dragons night in Pacoima or Puente Hills is now the bread and butter of the still-new millennial mindset when it comes to big bucks in entertainment. One need look no further than The Blackheart Burlesque, the latest traveling show by hotties-with-attitude The Suicide Girls, to see just how deeply and profoundly we once-derided princes and princesses of unhealthy pulchritude are now being pandered to. Tellingly, founder Missy Suicide told me that most of the evening’s strongest numbers were debuted to Comic-Con audiences at San Diego in ’14 and ’15: “I mean, our shows at Comic-Con are insane. If the crowd at Comic-Con responds well to a new number, chances are it’ll stay in the show.”

Never thought you wanted to see Planet of the Apes reworked into a sexual tease? Read on, as we walk through seven geek-culture icons reimagined as heavy-breathing rock n’ roll flesh fantasies. (The show comes to Colorado Springs on the 25th, and to Denver on the 26th. Check out the full tour schedule at the official Blackheart Burlesque site)

First off, Wonder Woman is a no-brainer. People would come from far and wide if the only thing they were gonna see was five minutes of sexy Wonder Woman. But I’m more struck by sexy Thor: There’s always been a strong element of dreamy sexuality to everyone’s favorite God of Thunder, if only because of those long flowing golden locks. Much of that appeal has long been muted in the for-boys-only comic series (no time for love), but it was never much of a stretch to imagine Odin’s favorite son singing “She’s Like The Wind” down to Jane Foster on silly old Midgard. The casting of likable hunk Chris Hemsworth in the MCU movies has gone a long way towards literalizing that undercurrent of hope-chest hankering, but you haven’t seen anything until you’ve seen Thor strip off the chest-plate and doff the helmet to reveal a sculpted, tatted bad-girl bod writhing up from the that red cape.

Yes, I know Thor was a girl for a while in the comics. Trust me, you’ll be getting your Thor history good and mixed up at this show. It’s a strange thing to experience the natural throbbing of martial pride any fans feels when in the presence of the proudest son of Asgard, and to then violently have your loins shifted into tumescence-mode, but that’s what this Blackheart Burlesque offers in droves: The unspoken connection between escapism and big-time sensuality, to crib from Bjork. More on that mystery later.

6) The Legend of Zelda

I’m pretty sure The Legend of Zelda is about as far from sexy as pop culture gets. Those squat little Nintendo figures don’t exactly lend themselves to catlike litheness. So I’m not sure if they just had a costume lying around or what, but with an EMD version of one of the Zelda game themes on the soundtrack, a solo Suicide Girl managed to get startlingly sweet and sexy at the same time during a brief homage to the popular franchise. It was my favorite routine of the night, and you could feel a hush come over the crowd as the elven green felt came off to reveal – predictably, at this point, but not unpleasantly – another of those impressive SG bodies, somehow soft and hard at the same time, crossing classic feminine mystique with the kind of body art you might expect to see down ‘round the penitentiary.

This seemed to me to be the turning point of the show, as huge hit number after huge hit number followed. But I’m sure it was entirely by design that one of the most memorable moments of the night was also the quietest. And now I gotta play Zelda again.

5) Planet of the Apes

Boy oh boy. There wasn’t a more surreal moment all night than when four Suicide Girls in ape masks (you read that right) were joined by another one wearing an astronaut’s helmet, and I realized that what had been a bit of dada choreography was turning into an expressionistic replay of the plot of the ’68 classic original Apes movie. And while that basically amounted to the apes chasing an extremely sexy female Chuck Heston around the relatively small stage at the El Rey, I had to bow to the bona fides on display. No small effort went into this Blackheart Burlesque show, but to think someone had to sit down and figure out how to block a sexy interpretive dance number around that bit where Heston gets caught up in the net and growls, “Get you stinking paws off me, you damned dirty ape!”… Well, this is eons beyond your granddad’s feather-boa straddling stripper babes. This was some kind of crazy new art form I was seeing.

And yes, the whole thing was scored to the mock Apes musical from The Simpsons.

Another solo number, this one a bit more quizzical. While featuring one dancer dressed in a pretty sweet Frank the Rabbit costume, and set to Donnie Darko’s somber Gary Jules cover of “Mad World,” most of the other substance of the movie went right out the window with no context to roll around in. What you had was a slow, sort of sad stripping of the Frank suit, down to a Suicide Girl with the usual black-x tape covering up her nipples. This is the kind of thing I had expected prior to seeing the show: lip service done to fanboy faves, but not much more than that.

Now, if you went to a regular burlesque show and a girl came out in a Frank the Bunny outfit, it would blow your stinkin’ mind. Surrounded by the more deep-dive inspiration of the pop-cultural homages before and after it, the Darko number felt a bit lacking. Or at least as lacking as a really, really sexy girl stripping off a menacing, iconic bunny suit can be. 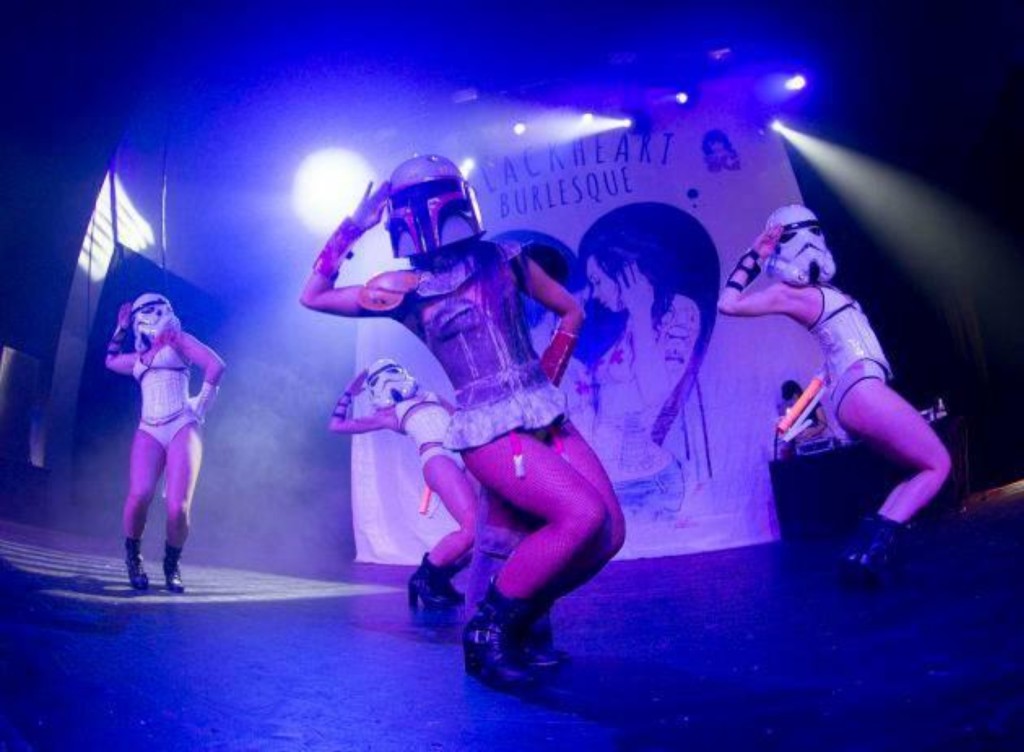 Only on the stage of the Blackheart Burlesque does space-fascism tango so decadently with out-and-out heated lust. I’m not sure I ever considered how much sexier Boba Fett would be if he were a hot biker chick with a tramp-stamp where his jet-pack ought to be, but the evidence is on display at every show. Sure, it was kinda hot when that raspy-voiced bounty hunter in Return of the Jedi turned out to be Leia with her hair up. And sure, I used to know a guy who would dress up his buxom girlfriend as Indiana Jones just to add some spice to their mating. But seeing a phalanx of hot-bodied Stormtrooper girls performing a synchronized grind called up fond memories of “Springtime for Hitler” when it wasn’t calling up strange miswired sexual thoughts from my youth – like the time I had that Boba Fett figure twisted up in my pocket in gym class, and things got complicated.

The Star Wars number, along with the next entry on the list, is pure geek-nerd-sex delirium and definitely something I’ll never forget, even if I don’t quite understand it. 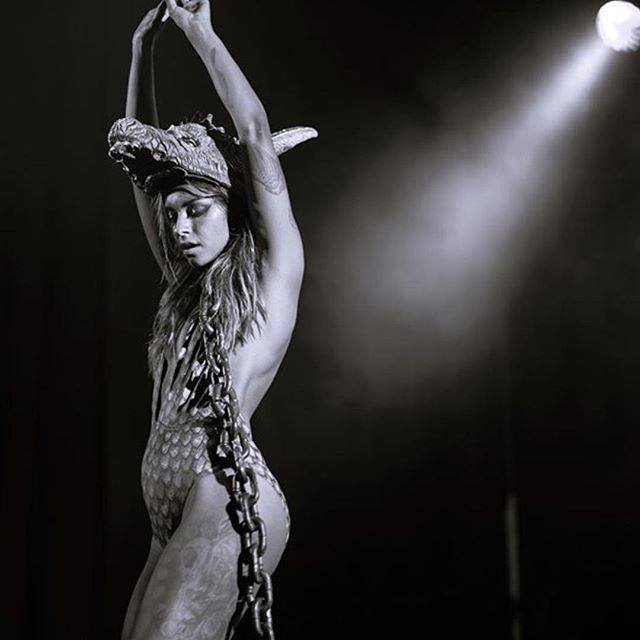 Well, sure. This makes a lot of sense. If there’s one thing that differentiates HBO’s adaptation of George RR Martin’s take on Tolkienesque fantasy-history, it’s that it’s dripping with wall-to-wall sex. Sometimes nice sweet sex, but more often big nasty mean old funky quasi-medieval sex. Saved for the final stretch, The Suicide Girls’ GOT spectacular had it all, and by that I suppose I mean it makes you want to copulate not just with everyone’s favorite Mother of Dragons, but with the dragons, too. I don’t think even HBO has gone that far, although I admit I haven’t finished season five. I almost want to detract points for obviousness here, but at the same time I feel pretty confident that fans and other audience members would have revolted without a quick trip to Westeros and its outlying hell-holes. That considered, it was a job well-done. 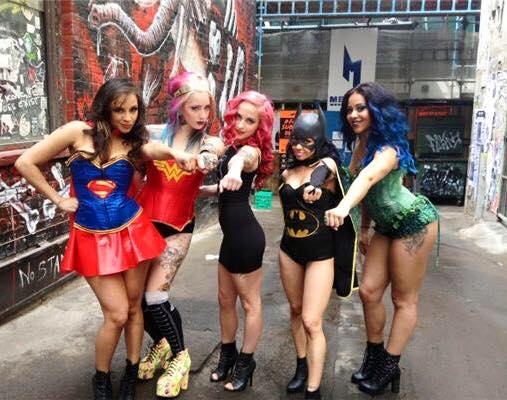 And I’m pretty sure we are talking about Batman here. Not Batgirl. This was a Lady Batman. She came out right near the beginning, with the aforementioned Thor and the uncommented-on-by-me Captain America. She was scary, as Bob Kane and Bill Finger intended, but she was also scantily dressed and super-sexy, which may not have been on the creators’ minds. And so again I’m forced to wonder about that crossroads between the kind of fervor geeks greet their favorite costumed heroes with, and the kind of mouth-frothing situation almost anyone finds themselves in when confronted – live and in person – with an extremely sexy, extremely confident sex bomb like any one of the Suicide Girls. Where is that strange meeting place, where our childhood dreams meet our adult ones? Who knew we wanted to see Batman get down and dirty, stripping to a thong and pasties? But judging by the whoops and hollering of everyone from the audience that night, we did.