Menu
Home
>
Video Games
>
At Last, a Video Game Where You Give Naked Dudes a Rubdown in the Shower 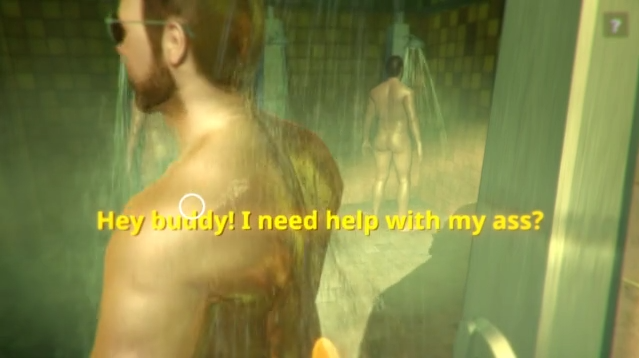 From the inventor of the game about having sex with your gay car comes one where you hook up and soap up guys in the gym locker room shower – and then you wait and wait and wait for the next opportunity. Because, you see…

Waiting is an act of submission, but that’s not really a bad thing. Delayed gratification is an integral part of pacing that can enrich an experience; you can’t feel a drop without a build-up.

In sex, the notion of waiting is very important. Some people wait to have any sex until they are married, some wait to have sex depending on their menstrual cycle; some are tired, some don’t feel like it, and some just plain don’t want to. Some people perform sex as work, which is often charged at a time-dependent rate. Foreplay and edging are common sexual practices that are about the fun of “development”, where the delay of the climax is the whole point. Basically, only virgins don’t like my games Basically, sex often takes place at specific times, places, and moods.

Designer Robert Yang describes how he was inspired by a music video where “two hunks spray themselves with gushing fluids, suggestively shooting up from the bottom of the frame,” but rather than animating what you think he will as a result of that, he figures out how to make a shower look realistic.

The game ends when the dude awkwardly rejects you, after you imagine yourself drowning him. Because reasons.

When you look down, you’re noticeably much less fit than the man you scrubbed the past few days, and you are also not white. You don’t fit this platonic gay male ideal. Who would ever want to scrub you back, really?

I’ll just offer this as a counterpoint:

via Kotaku and Sly Dante.