Menu
Home
>
Cartoons
>
SPOILERS! 11 Ways I’m About to Beat the Dead Horse That Is the Jem and the Holograms Movie

7. Jerrica’s Dead Dad Is Like a Nice Version of Saw‘s Jigsaw Killer.

We don’t know how Jerrica’s dad died. We only know that he never actually looked sick, and had a fair bit of advance warning – enough to plant clues all over Los Angeles for Jerrica to find a decade later, as he presumably counts on the fact that major locations like the Santa Monica pier and an elite rock club are easy enough to (a) break in and rig with his gimmicks and (b) maintain said gimmicks for years after his death without anyone else finding them except his daughter.

He also counts on a whole shit-ton of batteries remaining properly charged for that whole time. And while he does not utilize a puppet on a tricycle, he does have… 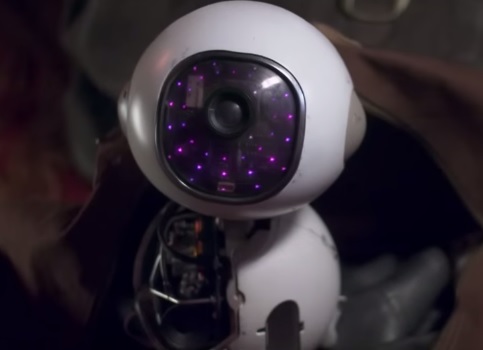 We’ve covered just how awful this whole deal is already – but watching the little robot with the flappy mouse ears and a pop-out unicycle wheel, I wondered if Chu wasn’t mixing up his memories, and giving us T-BOB from M.A.S.K. Except, just to reiterate, this version of “Synergy” does NOT have artificial intelligence. Rather, it’s a half-finished invention Jerrica’s dad left behind. She takes it to L.A. with her, of course, and then when it starts glowing, she and all the other girls get scared that it’s a ghost or UFO or something (seriously, it’s like we’re suddenly in a Scooby-Doo film). Apparently it was activated by location sensors long ago planted by dad, and this kicks off the scavenger hunt that consumes much of the rest of the movie, all so Jerrica can finally play Dad’s last home movie, in which he tells her to…

That’s right – BELIEVE IN HERSELF! You’d think he could have just told her this when he was alive.

But that’s not the dumbest thing involving Synergy…

Let’s back up a little. The first time Jerrica and her sisters get ready to be made over as rock stars, Erica critiques their looks, and among other things, tells Jerrica that the light-up earrings her father gave her are lame. Now, kudos for getting the key gimmick from the original doll line in there somehow, but here’s where it gets weird. Erica doesn’t like the earrings, but Jerrica wants to save them…so Erica has them placed in a silver box inside the secure office safe. Why? She doesn’t want them, and Jerrica could’ve just put them in her pocket. The answer, of course, is that the earrings will turn out to be worth something – the final piece of 51N3RG.Y – prompting a needless office heist when Jerrica could probably have just said, “Please give me back my crappy earrings.” But it allows them all to find another deus ex machina in the safe.

Jerrica and Erica have a falling out after Jerrica signs a binding solo contract, as she needs the money to save her mom’s house. This (very) temporarily breaks up the band, but here’s the thing – Erica blackmails Jerrica by saying she owns the rights to the Jem name and persona, and can get someone else to play the part. So she needs Jerrica to sign. But Jerrica promptly and unironically signs the contract “Jem.”

That wouldn’t hold up in court. And the movie never mentions it again.

The appeal of Jem, Erica tells us repeatedly, is that she is a mystery. Nobody knows who she is or where she comes from, and the label can create her persona from scratch. As such, the real-life Jerrica also has no leverage, when the character is everything.

There is a small logical problem with this – the other band members use their real names. And in the opening narration, Jerrica tells us that Kimber has lived her entire life on social media. Yes, when Erica signs the band, she orders them offline indefinitely, but the Internet being what it is – hell, a PHONE BOOK and a neighborhood being what they are – we don’t think anybody would be able to trace Kimber, Aja and Shana, and complete the deductive work to figure out who their fourth member must be?

I still don’t understand how Jason Blum could think we’d sit through an hour and 55 minutes of this and come away with changed minds. This isn’t even a Glitter or Crossroads, where things get so ridiculously bad you laugh – the four leads seem like decent actresses, but they have nothing to work with. Granted, in the middle of the end credits, we get our version of a Thanos scene, featuring a big-name cameo, and it’s literally the only moment in the movie that feels like the old Jem, with its brighter-than-life colors and soapy melodrama.

But you can’t ask fans to sit through a mediocre movie just so they can get a better sequel – that argument only works for George Lucas. And the director of the G.I. Joe movie that finally got to the point ought to know that better than anyone.

At one point, a security guard character actually utters the line, “If a squirrel can water-ski, we can do anything, guys!”

Anything except get this movie right, I guess.