When I reviewed the Halloween Whopper, it was a same-day turnaround, so I did not have time to report on the most notable after-effect. Suffice it to say my commode was Irish for a day.

But jeez, I thought Sexy Pizza Rat was the worst “Sexy” costume I’d see this year. This one, at least, is custom, rather than prefab, though. How do you make it again, HalloweenCostumes.com?

To make a sexy poop costume (lol, is this real life?), you’ll first need to procure a standard poop costume to use as the base.

Our tough s#!t costume is the crappiest candidate we carry!

Hold up, what do you mean by…oh. 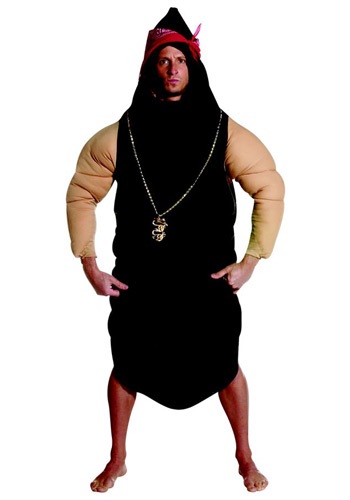 So, where did this tough S#!t come from? He’s from the mean streets of Chicago, grew up with tough guys everywhere, gunshots sounding every night. All the other kids made fun of him for looking like a poo, but this is one crap who never took crap from nobody. Humble beginnings, but now? He’s top shelf, a double-decker; he’s the numero uno number two! Just try and flush him. He’ll make your day…

Totally not problematic at all. Moving along.

We cut off the sleeves with a pair of sharp scissors, then proceeded to spray paint the entire thing an appropriate emerald hue. After waiting for it to dry thoroughly, we styled our model with “loads” of green accessories. If you’re not quite brave enough to show up to a party dressed like this solo, and you want to give your green poop ensemble some added context, why not grab your main “squeeze” and dress him up as a Hallowhopper? Using a Sharpie to color the bun black is a bit tedious, but the ends justify the beans, if you will.

What beans? We’re just naming anything that can turn into shit now? That turd costume looks too solid to be associated with beans.

What do you think of our sexy green poop costume idea? Do we even want to know what you think about our sexy green poop costume idea? On any given year, topical costumes based on pop culture headlines are trendy Halloween choices, but 2015 might just be the first year where costumes based on “poop culture” reign supreme. In that case, HAPPY BOWEL-WEEN!

This is one big ruse by Tupper Adam, right? And, um, what’s “poop culture” (besides E.coli)?