For many children of the ’80s and ’90s, Freddy Krueger reigns as king of nightmares. Freddy represented the boogeyman that terrified us all at one time or another; this one fully come to life and ready to take ours. At his best he haunted his victims with terrifying creations that mined their deepest fears and insecurities, while at his worst he slung awkward pop culture references while still crafting nightmarish scenarios.

If you’re somehow unfamiliar with the character played by Robert Englund, he was a child murderer who met his own fiery end at the hands of parents living in the town of Springwood after his criminal court case was thrown out. The son of a hundred maniacs and one poor nun, he became far more evil and powerful after death, developing the ability to warp and manipulate dreams, wreaking havoc in the real world while tormenting his victims in the dreamscape.

We made our way through every film to come up with the creepiest, craziest, goriest and most maddening moments in the series, whether they directly lead to a death or not. As you can imagine, the following entries – presented in chronological order – contain huge spoilers and NSFW videos and pictures.

12. Tina Around the Room (A Nightmare on Elm Street)

After banging her boyfriend Rod, Tina – whose nightmares about a sweater-wearing maniac with a knife glove opened the film – searches for the source of a noise outside. Soon she finds herself face to face with Krueger and his too-long arms walking down an alley.

She runs, but he’s everywhere she wants to go, so the chase remains a bit one-sided. As it plays out, though we see Freddy’s abilities to change his body, survive mutilation and ultimately change the real world from his dream realm.

This fully comes to light when Tina’s screams wake Rod up and he sees her spinning through the air and writhing in agony across the ceiling as she bleeds to death. While this kill doesn’t necessarily build on Tina’s innermost fears, it sure goes a long way to set up what Freddy can do and also presents an iconic scene in horror film-making that has been copied more than once (even within its own franchise).

11. Nancy Fights Back (A Nightmare on Elm Street)

In another franchise-setting series of scenes, the end of the first film basically sets up how all the other films will work. The main character will figure out some way to stop Krueger, willingly go into the dream world (usually with someone watching out for her or him who tends to fail) and lose a few important people along the way.

In Nancy’s case she’s locked in her own home and can’t get out, but theorizes that she can bring Freddy into the real world when she wakes up, as long as someone can wake her up at the right time. Her boyfriend Glen screws up, passes out and becomes the source of one of the best blood geysers in film history, so she asks her dad for help.

Ready to test her theory, Nancy sets a series of Home Alone-esque traps as well as her alarm before heading into Freddy’s world where he fiendishly stalks her. After a tussle, she grabs him just as her alarm goes off and the action moves to the real world. The traps work, but her dad doesn’t believe that anything’s going on inside which leaves Krueger to torment Nancy and kill her mother. Thinking everything’s over after seeing her mom’s corpse float down into her bed, Nancy faces Krueger one more time and tells him she doesn’t believe in him. That seems to work until all her formerly dead friends show up in a green and red-themed car and drives off with them just as Freddy drags Nancy’s mom through a very small window in their front door. Wait, what?

Wes Craven originally wanted to end the film on a happy note, with Nancy winning and that being that, but the producers smelled sequel potential and went with the one seen in the film. It’s a real mind-screw that many of the sequels — and other films — tried to replicate, but never quite as well. Hell, the movie’s been out for 30-plus years and people still argue about what it all means!

10. Hitting The Showers (A Nightmare on Elm Street 2: Freddy’s Revenge) 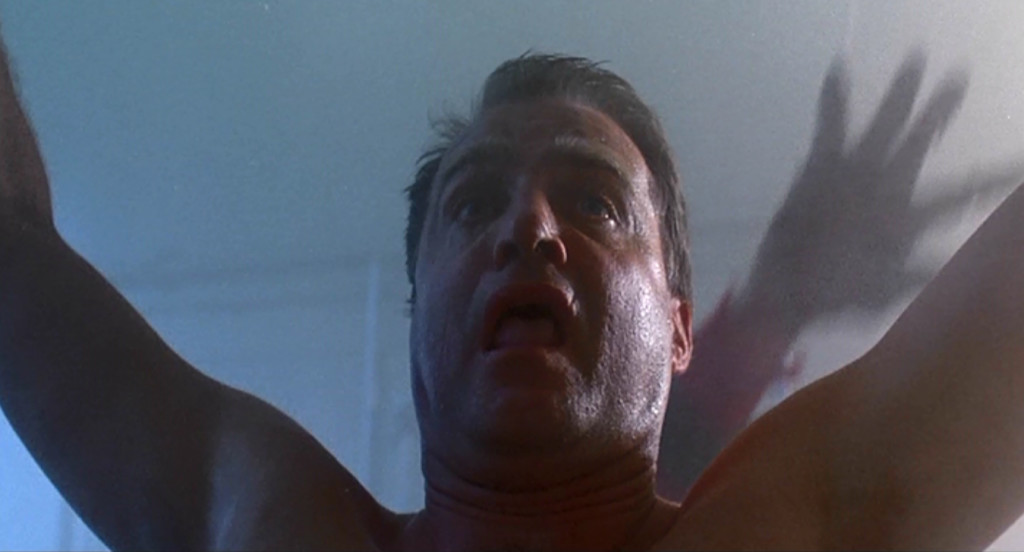 Every long-running horror franchise brings in unique elements that wind up being generally ignored by the follow-ups. That’s the case with Freddy’s Revenge, which posits that the villain can influence people like high school student Jesse to kill for him.

Plagued by strange dreams, Jesse find it becoming unclear to him (and the audience) when he’s awake and when he’s dreaming. So, when he finds himself wandering in the rain, then stopping in at a leather bar one night, no one’s really sure what to think.

Jesse’s outing is cut short when his coach appears out of nowhere, takes him back to the school gym and makes him run laps. While Jesse bathes, Coach is assaulted by sports equipment in his office before jump ropes drag him into the locker room where he’s tied to the shower, stripped naked and snapped across the backside by floating towels. Soon, Krueger walks out of the steam to filet the man. As the scene ends, Jesse is revealed to be the one wearing the Freddy glove, but where’s the hat we just saw?!

What’s real and what’s a nightmare? The line is very fuzzy in this film, but Coach would probably classify it all as the latter. His early demise could have rid the world of another monster. No, not because of the leather bar thing, but because he’s a gym teacher and we all know most of them are just barely hanging on to their sanity as it is.

Jesse’s friend Lisa is throwing a pool party the same night that Jesse kills his frenemy Grady. Freddy literally bursts out of Jesse’s body at Lisa’s house, but only after working his malicious magic on the party-goers.

The kids at the end of Freddy’s Revenge are dumb enough to think that, as soon as the parents turn off the lights, that means they can bust out the loud tunes and booze, so it makes sense that at least one of them thinks they can make peace with Fred Krueger. This is after he wasted a bunch of beer, boiled the pool, electrified the fence and murdered people right in front of them. Soon after killing the potential peacemaker, he declares that everyone there is his child and walks through a fence like it was nothing.

This one probably doesn’t count as an actual nightmare, but there’s just something amazing about seeing Freddy Krueger out in the real world slicing and dicing his way through a crowd of kids instead of the usual small groups. It’s that kind of work ethic that kept him at the top of the slasher heap all those years.

8. A Boy on Puppet Strings (A Nightmare on Elm Street 3: Dream Warriors)

One of the best standalone films in the Nightmare series, Dream Warriors focuses on a bunch of kids in a mental institution who band together to take Freddy on with the help of Nancy (now a dream doctor of sorts) from the first film. Before teaming up, though, they all witness the death of one of their own: Philip, a sleepwalker who also has an affinity for making his own puppets.

Using some of Philip’s raw material, Freddy takes over the body of one of the young man’s puppets before making a few air cuts and then turning his victim into a bloody marionette led around by his own skin and innards. Enjoying the literal role of puppeteer, Freddy unseeingly walks Philip up to a tower, leans him out over the edge and cuts his strings.

The scene is one of the most gruesome of the bunch, not just because of the cringe-worthy body horror gore, but because Philip’s friends have to watch the scene unfold as he’s led to his death. Of course, none of the adults believe that this was anything other than a dream because they’re old and lame. Oh, and also that whole history of sleepwalking thing.

By the end of Dream Warriors, Nancy has earned the trust of surviving patients Kristen, Kincaid, Taryn and Will to the point where they all go into the dream world to get their friend Joey back. While there, they gain a variety of super powers and seem like they might be able to actually defeat Freddy with ease.

But this is Freddy’s domain, and he rarely gives other people too much power over it. Freddy takes Kristen back to the beginning of the movie, making her think that it was all just a bad dream just before decapitating her mom. He then confronts former junkie Taryn in a seedy alley where he turns each finger into a syringe and jabs them all into her, causing an overdose. Will puts up a pretty good fight by using his magic powers, but they don’t stop Freddy from stabbing him in the heart with that iconic glove.

Kristen, Kincaid and Joey ultimately make it out alive after seemingly destroying Freddy, but not before he guts Nancy like a fish. Unfortunately for all three survivors, their potential was completely wasted as they were offed early in the next film.

6. Debbie Bugs Out (A Nightmare on Elm Street 4: The Dream Master)

Several characters assume that their physical prowess in the real world will help them fight Freddy in his realm. The Dream Master‘s Rick tried to use his karate skills to no avail, and his friend Debbie probably would have body slammed him, if he hadn’t appeared while she was pumping iron.

While Freddy keeps Alice and her boyfriend in a time loop, the madman has plenty of time to press Debbie’s barbell down so far that it actually rips her arms apart at the elbow. As if that wasn’t bad enough, her human arms fall off to reveal giant insect appendages.

Hugely afraid of insects, Debbie is turned into that which she hates most, teleported into a roach motel and eventually smashed to death by Krueger. The whole scene is amazingly gross which just adds to this movie’s bonkers mix of interesting moments like this and the weird Jaws homage with Freddy wearing sunglasses on the beach.