5. Freddy’s Birth (A Nightmare on Elm Street 5: The Dream Child)

After surviving the fourth film, Alice seems like she’s ready to move on with her life now that Freddy’s seemingly dead and she’s graduating from high school. However, the nightmares start back up at the beginning of this film, but this time they revolve around Freddy’s mother Amanda, a nun who was locked in an asylum with a hundred maniacs overnight. She survived, had little Freddy and returned later as a spirit to help stop her evil son.

Through her dreams, Alice relives Amanda’s torment, witnesses Freddy’s monstrous birth and watches his rebirth as the slug-thing wriggles to the old church where she defeated him in the previous film. The baby monster literally grows into his older self before declaring “It’s a boy” and stalking his prey once again.

Luckily for Alice, Amanda appears to scare off her son. It works and Alice survives, but winds up four hours late for work. Still, if there’s any good reason to be late it’s, “I saw the birth of a demon that killed a huge portion of the teen population in town.”

Freddy’s Dead is kind of a mess. By this point, Freddy had become less of an evil wraith and more of a stand-up comic with knife fingers and crazy powers. The film posits that Freddy succeeded in killing every kid in Springwood. The town is now all old people who look like extras from Soundgarden’s “Black Hole Sun” video but he needs more kids to haunt.

In the beginning of the film a young man suffering from amnesia winds up at a shelter for runaways and troubled kids where he meets Maggie, the caretaker, and fellow charges including Tracy. They all go on a field trip to Spingwood where they soon discover that the town – and Freddy – don’t want them to go leave.

Filled with odd kills and pop culture references, this movie has one particularly haunting nightmare revolving around Tracy. While washing up in a bathroom she suddenly finds herself transported to her childhood home where her abusive father says, “Tracy girl, daddy’s home.” It’s impossible to watch the next few minutes without cringing big time, but that makes it all the more satisfying when she smashes him with a coffee pot over and over and over again. It’s almost a relief when he turns into Freddy and the two face off. That’s right, it’s a relief when the burned child murderer replaces the grotesque child molester, which tells you a lot about the film. 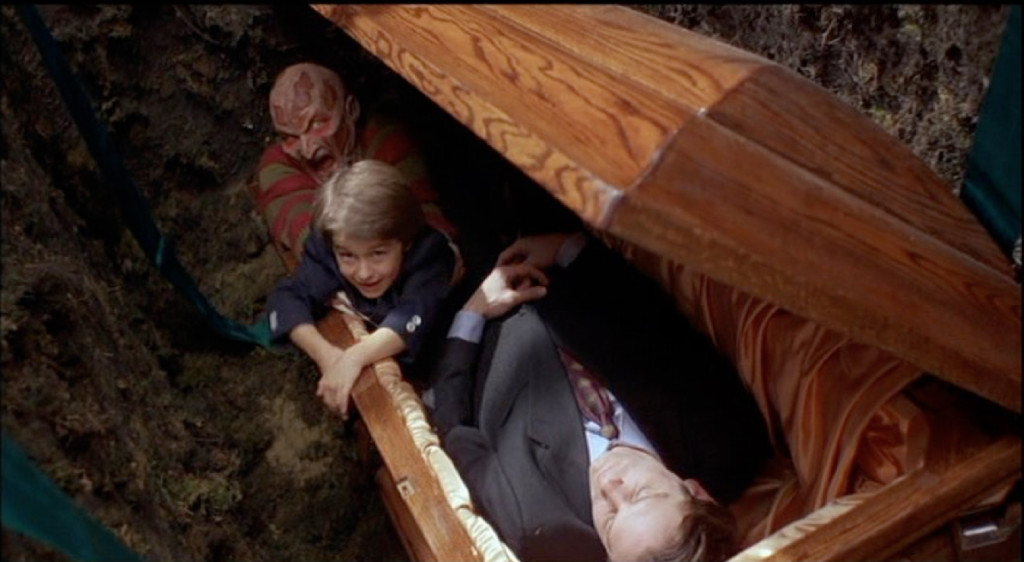 The premise of Wes Craven’s New Nightmare is that Freddy is a powerful force of evil incarnate that was actually captured by the films. With the franchise over thanks to Freddy’s Dead, he’s free to mess with people in the real world once again.

And the person he decides to hassle the most is Heather Langenkamp, the star of the first and third movies. Unfortunately for her, the nightmare killer has been haunting her son Dylan and killing her husband.

Not content to stop there, Freddy makes an appearance at the funeral (which is packed with actors who worked on the franchise) where he appears in the coffin and pulls Dylan down with him into an unseen chasm.  Heather leaps in after him and pulls the boy out just in time for her husband to reanimate and ask her to stay with him before she wakes up clutching the coffin. This all turns out to be a daydream caused by Heather hitting her head on the coffin because of an earthquake, but the image of Freddy popping up behind a small child in a casket with a corpse remains one of the movie’s most iconic images. That Freddy guy will go to any lengths to get a rise out of you! 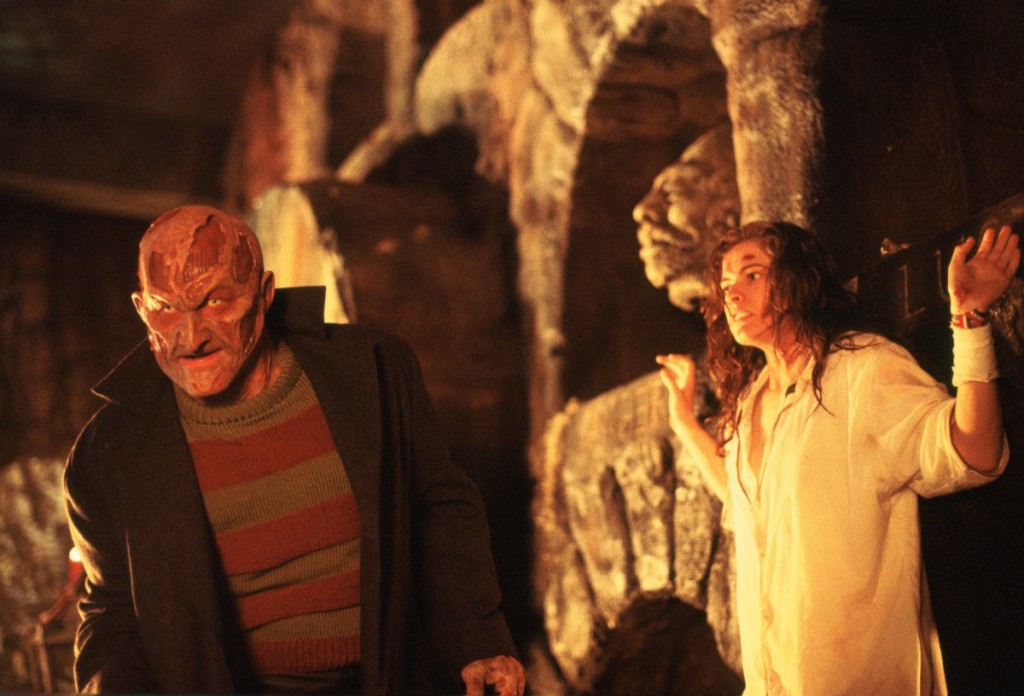 The last 45 minutes or so of New Nightmare is pretty insane. Dylan’s at the hospital being looked at, Heather’s suspected of child abuse and then Freddy kills their babysitter. Dylan takes off across the freeway to get back home, causing a huge pile-up in the process and Heather finds herself back in the role of Nancy along with John Saxon who played her dad in the film.

But all that pales in comparison to Freddy rising up through Dylan’s bed and taking him down to the dream world. Heather follows soon after, entering a hellish world filled with fire, filth and finger knives. In addition to the incredible moments like Freddy trying to eat Dylan whole, and sets unlike any we’d seen at this point in the series, the meta nature of this conflict adds several layers to it.

As an actress, Heather aided in not only capturing the fear demon, but also inspiring nightmares in viewers. With these last scenes, she has the tables turned on her, but does her best to make up for her part in all this while also trying to save her son while all the other kids in these movies were basically worried about themselves or their friends. Also, in the context of the film, she’s not just battling for herself, but for the fate of the world. If she doesn’t help contain Freddy, what will happen to reality? Odds are Mr. Krueger wishes he had picked a much easier target, like that Depp kid from the first film.

The underrated Freddy Vs. Jason revolves around the idea that Freddy helps bring Jason back to life so that the masked man can start terrorizing the children of Springwood once more, somehow making them think Freddy’s back. As such, this movie winds up being much more Freddy-centric than many Jason fans preferred, but it also showcases just how much of a bastard Freddy is, because you actually feel sorry for Jason in the movie!

As most horror fans know, Jason Voorhees drowned because his camp counselors were too busy fooling around to notice him in the water. Freddy uses that by surrounding the hulking monster with H2O in the dream world after a battle, and then reverting him to a kid, making him relive all the bullying from childhood, then dragging the boy under water.

Before the fight even began he brought Jason’s dear departed mother – and the star of the first Friday the 13th – back from the dead to heap grief on the silent killer. If Freddy’s goal was to make the audience feel sorry for one of that world’s most prolific murderers, he sure nailed it.

By the time the Nightmare remake rolled around in 2010, many slasher fans assumed the worst, that this new film would come packed with teen heartthrobs, bad CGI and an awkward mix of original storytelling compounded with homage after homage. As it turned out, all of those fears proved to be accurate with this film, but there was one other huge disappointment: Freddy.

Jackie Earle Haley is a great actor, there’s no doubt about that – he’s just not presented as a big enough threat. The face veers into crispy guinea pig territory, the voice hovers around creepy uncle most of the time and he just never looks imposing enough in his shots. Sure, he comes off as dangerous and menacing at times, but just look at how small the boogeyman looks next to just about everyone in that movie. As you might expect, spoilers and NSFW content follow.

At the end of the day, he just had boots that were almost impossible to fill. Unlike Jason or Michael Myers, who wear masks, Freddy is fully embodied by Robert Englund. The man brought not just a presences, but an attitude to the character that Haley didn’t top, which makes you wonder what the point of the film is, after all.

The 20 Most Deserving Victims In The Friday the 13th Films