Day 2 of con is where things really get crazy. There are at least two panels every hour that I want to go to, and signings and booths are now running at full speed. Today is where having a plan becomes a necessity.

Don’t worry about getting to IDW on Thursday. You’re fine to wait until Friday to grab their exclusives. I’m sure there will be plenty of Walt Simonson Ragnarok Artists Edition Portfolios left by today, and I’m in no way trying to sabotage their sales so I can be assured of one when I get there on Saturday.

CHECK OUT THE TOY BOOTHS

A nice way to take a break later in the day is to mosey on through the toy displays – Square Enix (Booth 1604), McFarlane Toys (Booth 1526), Diamond Select Toys (Booth 1644), Kotobukiya (Booth 1654), and Funko (Booth 722) are always spectacles on the floor, and if you’re a Mortal Kombat or a Dark Knight Returns fan, Mezco Toys (Booth 1754) is your jam. And while they’re a comic company first, DC Entertainment (Booth SC01) will have a bunch of their toys with them. The TAS Batmobile is amazing.

I didn’t see a single Brooklyn Brewery bottle anywhere on the con floor last year, so I apologize for getting everyone’s hopes up. I guess this year I’m just going to have to stick with what worked when the con first started: duct taping a ziploc bag full of bourbon to my chest. 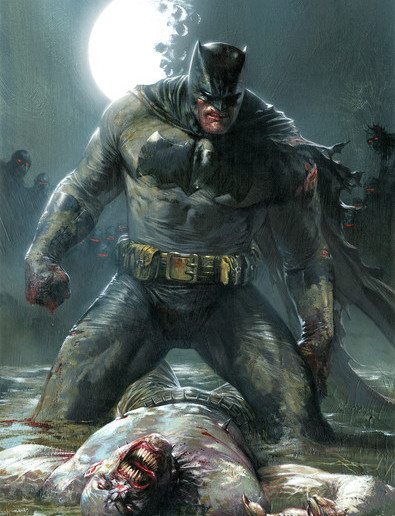 You know, maybe we can stop inviting him to these things? Click the link if you’re curious.

I try so hard to be cynical about Dark Knight 3: The Final Solution, and then DC gets Gabriele Dell’otto to do that variant cover above and my eyes roll into the back of my head and I drool on my shirt for like 15 minutes. Everybody involved in the book is announced for this panel except Frank Miller, but there are “special guests” coming, so Frank Miller will probably be there.

This off site shit blows. NYC spent 60 years and tens of billions of dollars making it so I DON’T have to walk from 8th Avenue to 11th Avenue for con, and now con is making me walk it backwards in the middle of the day if I want to go to the Adventure Time panel, or the Mr. Robot one (that show was one of the best I’ve ever seen, by the way), or Boruto, or Ash vs. Evil Dead. I get why it’s being done, but this is a massive inconvenience, and I’m sure I’m not the only one complaining.

They’ll probably talk about the One Punch Man anime being simulcast in Japan and on Hulu and Crunchyroll, but WHO CARES THEY’RE GIVING STUFF AWAY FOR FREE!

I don’t know anything about the other folks on this panel, but Nilah Magruder’s MFK is the cat’s pyjamas, so a panel where she gets to talk about the thing she does best on her webcomic is probably going to be fascinating.

I’m a big advocate for not having to get up (sloth doesn’t even begin to describe, really), but I DO find it suspicious that the Comic Book Legal Defense Fund has a panel to discuss banned comics the VERY SAME WEEK that their Humble Book Bundle with banned comics wraps up. Coincidence? Or does the CBLDF have…a marketing team! :lightning flashes, dramatic chipmunk music blasts:

Sure, Jedi aren’t real except in New Zealand, but this doesn’t bother me all that much. Teaching kids to lightsaber fight is the same thing as teaching them any martial art, or fencing if you want them to be really super smooth and half-Sith like the Inquisitor. But god help the first Quidditch tryouts I see…

I scanned down to the speaker list on this entry before I read the whole thing, so I saw Shannon Waters and Brooke Allen (co-creators of the Lumberjanes) on there with Raina Telgmeier and I internally squealed a little at the thought of Telgmeier writing an arc. She’s just moderating, though. Sigh.

I’m afraid to look. Is he crossing over with Taylor Swift?