Comic book artists have a long history of basing their characters on real life iconic figures, such as the X-Men villains known as the Hellfire Club being based on famous actors from the time (like Robert Shaw being the basis for Sebastian Shaw). A more recent example would be the Ultimate version of Nick Fury being based on Samuel L. Jackson; a move which led to Jackson portraying Nick Fury in the Marvel Cinematic Universe. This can also lead to legal trouble due to celebrities owning the rights to their likeness who then can pursue comic creators who unofficially use their image: in 1996, for instance, the musical duo Johnny and Edgar Winters sued DC Comics for using their likeness in an issue of Jonah Hex. In the issue (written by famed author Joe R. Lansdale) the two antagonists were vicious bandits named Johnny and Edgar. In real life, the Winters brothers have albinism, which was addressed untactfully in the comic by making them both half human, half worm monster.  While their case was unsuccessful, they still managed to tangle DC in lawsuits for eight years.

Things are not so risky in the land of the rising sun, however: Japan’s copyright laws are a lot less strict when it comes to depicting famous people in fictional works. This has led to a wave of unofficial appearances in many works of anime and manga that the original celebrities would likely disapprove of (and have no real way of preventing). This can lead to issues when said works leave their home country and come to the west, as translators now have to write around the original creator’s intent in order to prevent a lawsuit. And while Japan is known for using western celebrities in crazy ways even in an official capacity (such as in commercials); it is when they are given free reign that things really get bizarre… 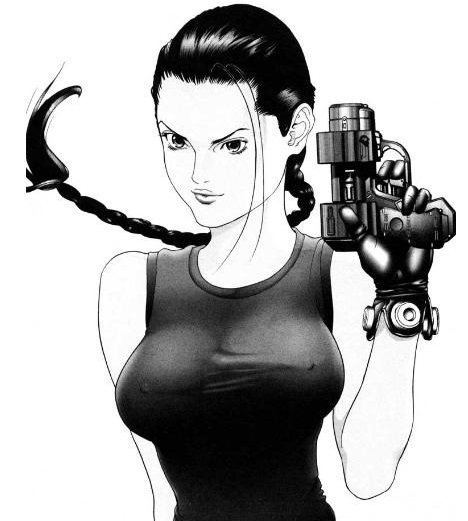 The popular anime & manga series known as Gantz is about people who are saved from dying by a mysterious black orb that forces them to take part in a game where they have to hunt down and kill aliens in order to earn points; once they earn 100 points then they can be resurrected and get their old lives back. During the “Buddhist Temple” story arc, a girl named Sei is one of the new contestants in the game. Despite being Japanese, Sei Sakuraoka is visually identical to Angelina Jolie’s portrayal of Lara Croft in the Tomb Raider movie series.

Within one chapter of meeting the main character; Sei decides to have sex with him (he’s 17 at the time). 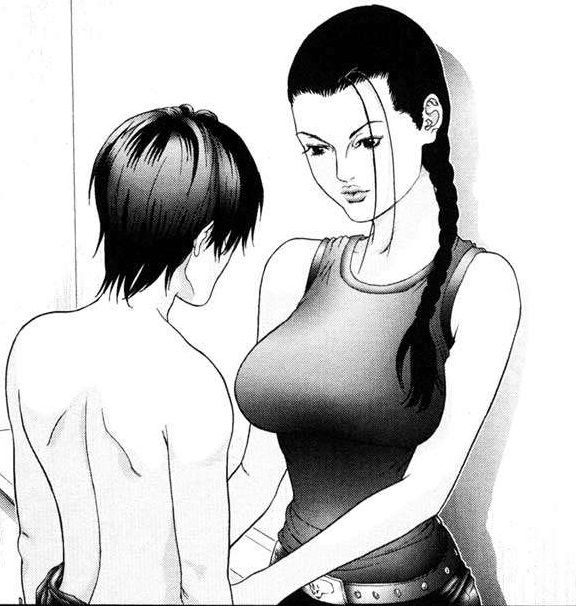 The visual comparisons to Angelina Jolie only existed in the manga, as Sei’s design would be changed for the anime adaptation of Gantz.

It is not hard to see why an artist would want to base a character on one of the most beautiful actresses in the world. If only someone could do the same for her handsome actor husband…oh, wait… 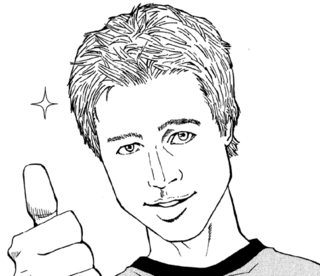 The multiple-award winning Yakitate!! Japan was an anime & manga series about competitive baking (seriously). The protagonist was a teenage baker named Kazuma Azuma who wants to create a national bread for Japan. This leads him to challenging bakers from other all around the world in order to reach his goal and become the greatest pastry maker of all time. 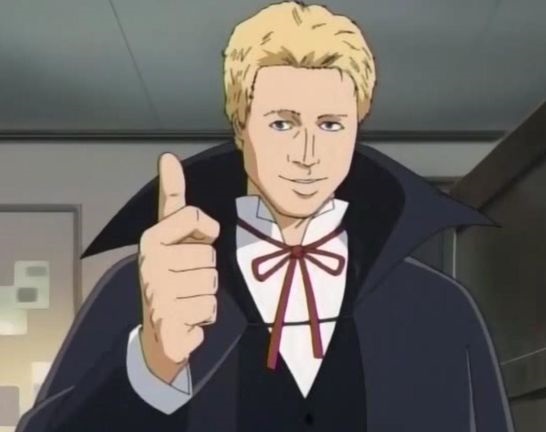 The series creator Takashi Hashiguchi had a weird obsession with the actor Brad Pitt. This led to a recurring character in Yakitate!! Japan named Brad Kidd ( called “Kid” in the anime) who is a recurring background character that helps out the main characters. The most bizarre thing about Brad Kidd is that every one of his appearances always uses the same drawing of Brad Pitt. The body is usually different, but the face and the expression he makes remains the same. Kind of like the expression he has in real life when he is being dragged to all those charity events by his wife. 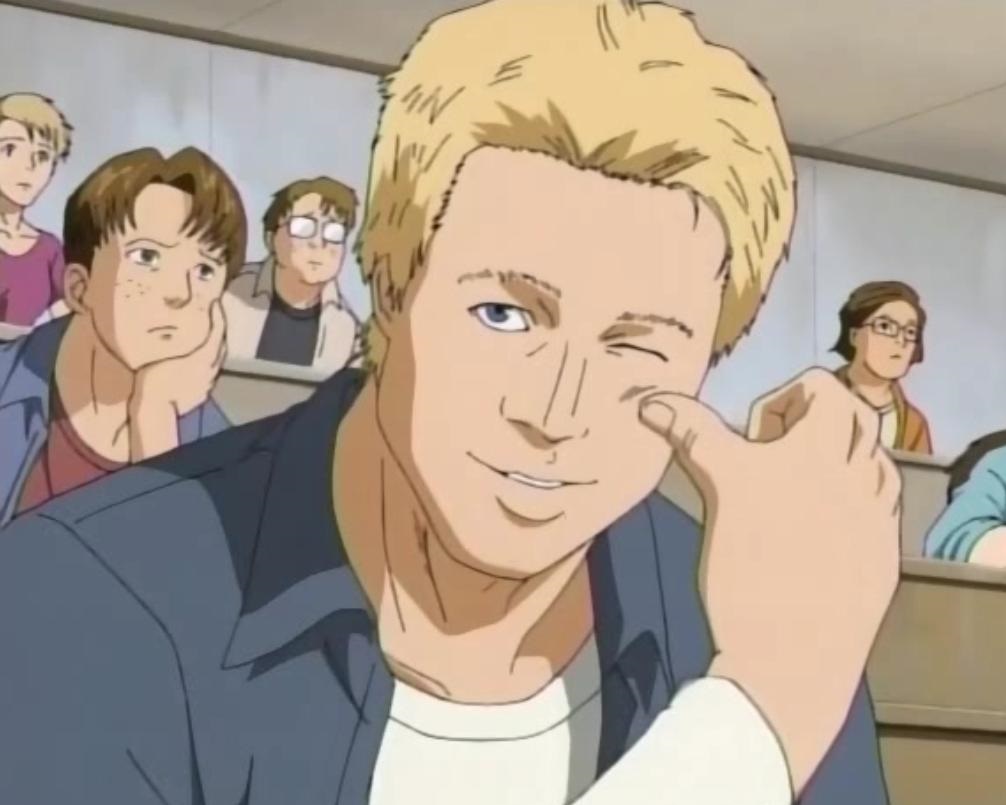 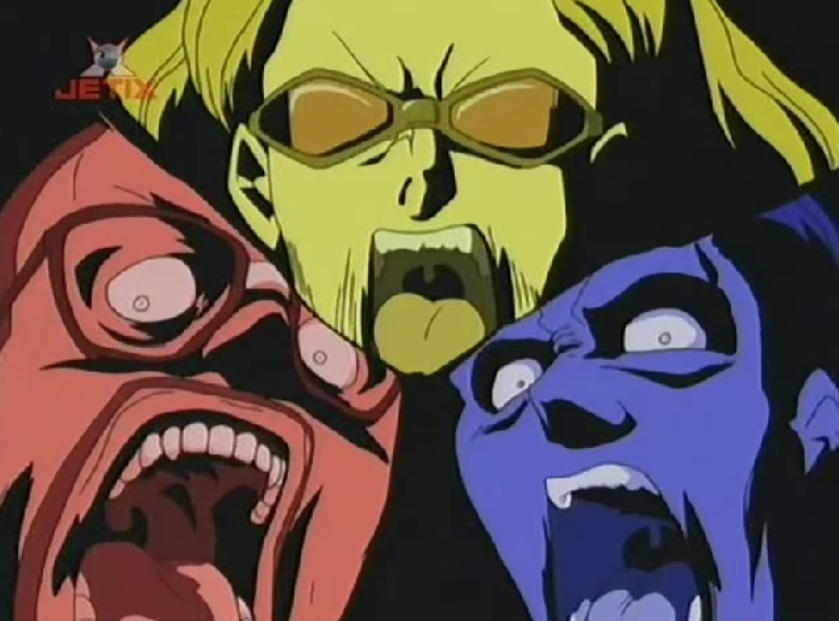 The anime series Shaman King was about modern day Shamans who could communicate with and control the spirits of the dead in order to use their powers. One such way involved infusing spirits with regular weapons in order to give them supernatural qualities. The story eventually leads to a massive tournament where Shamans from all around the world do battle in order to decide who will be their next king. During a filler arc of the anime; three characters show up who are based on the WWE wrestlers Bubba Ray Dudley, Edge and Matt Hardy.

These wrestlers gained renown during the Attitude era of wrestling for being part of the legendary “TLC” matches (which was an acronym for tables, ladders, and chairs), and this group of Shamans was known as Team LCT in the original Japanese version of the anime (which was changed to Team Insane Asylum in the American dub). Much like the characters they were based on, Team Insane Asylum used possessed versions of a table, a ladder, and a chair as weapons during the tournament.

I for one welcome our White Walker overlords. Along with Robot's Voice, I have also written articles and videos for Cracked, Top Tenz and Dorkly.