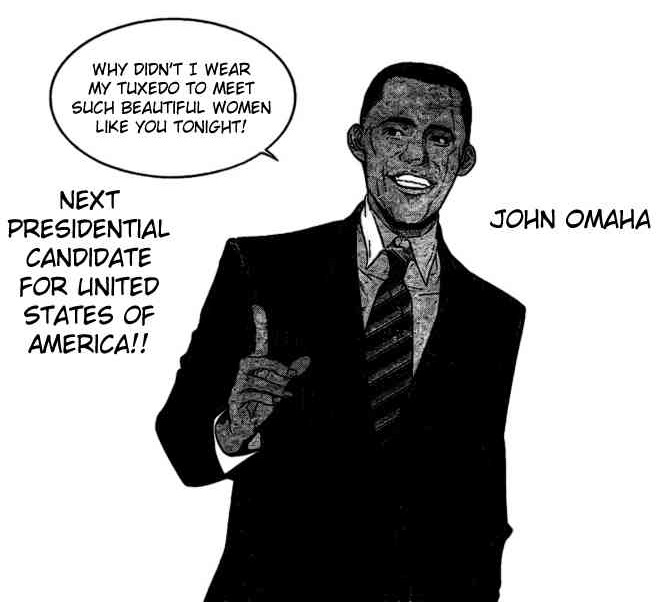 The series Air Gear is about Japanese teenagers engaging in a new sport involving cyber roller-skates. Despite its odd premise; Air Gear takes itself completely seriously for around 200 chapters. It builds an engaging world with history and mythology to rival any other big manga series out there.

That all changes in Chapter 206, when a new presidential candidate arrives in Japan; his name is John Omaha. 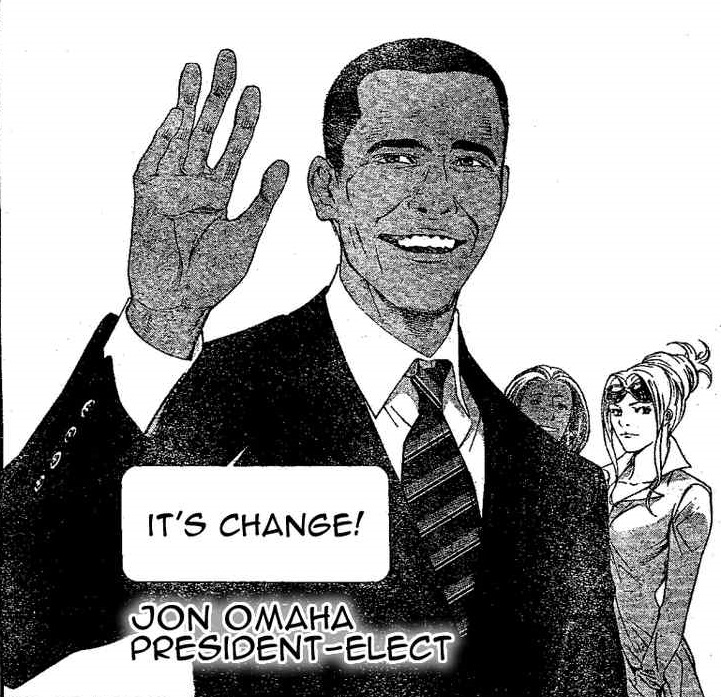 This isn’t some one-off joke appearance based on a popular foreign political candidate; John Omaha becomes a main part of the series with his own backstory and involvement in the main story arcs. At one point he gets mind-swapped with the female lead Emily’s body; with predictably creepy results. 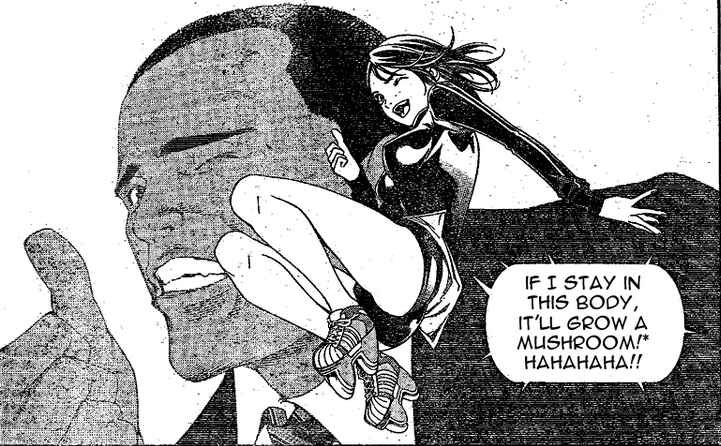 It seems that series creator Oh! great is a secret follower of the “Obama is from Kenya” birther movement, as Omaha’s backstory shows him growing up in a poor village in Africa that gets destroyed by terrorists. Bear in mind that he tells this tragic story to the protagonists while still in the body of a teenage girl. 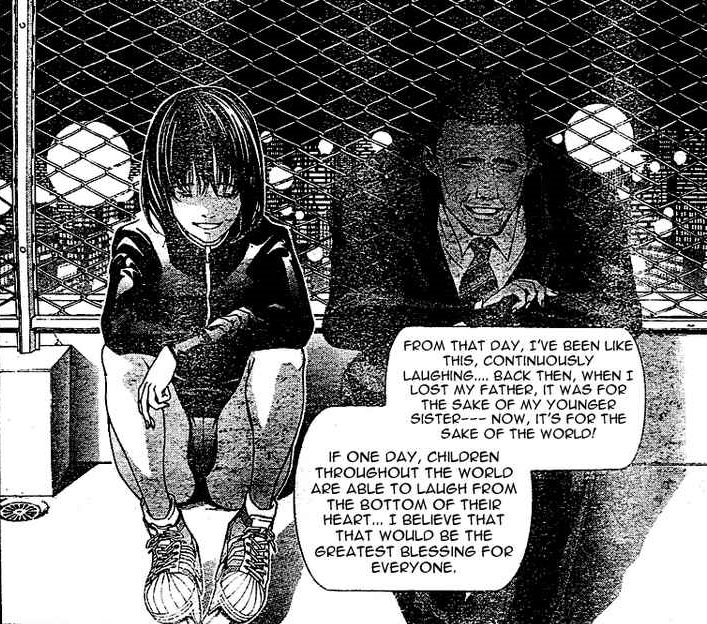 Thankfully Omaha is returned to his body and Air Gear’s story returns back to normal. What makes this even more unusual is that due to Obama winning his first election whilst this story arc was still going on, John Omaha also won his election as well (he was introduced as a candidate and later announced as the President-elect). It seems that the Fox News of the Air Gear universe are way worse at their job. Obama can’t blow his nose in the real world without being accused of being a socialist; what would it look like if he skipped most of the 2008 presidential campaign trail because he was too busy going on anime adventures in a girl’s body? 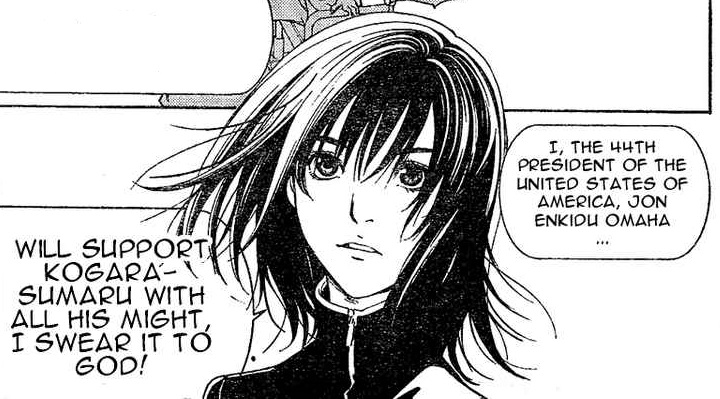 3 – Led Zeppelin Love Each Other 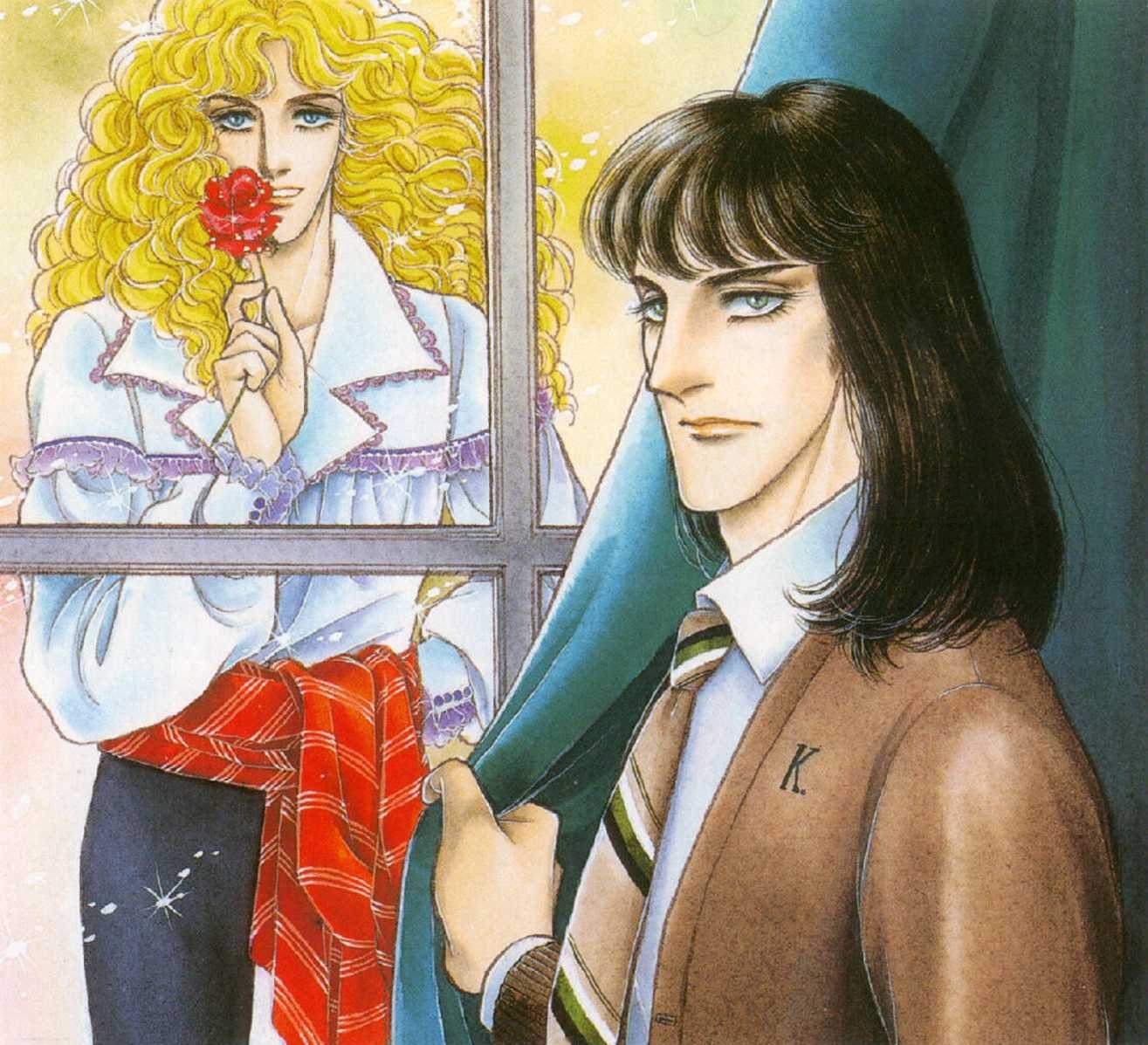 In Japan there exists a style of comic known as Shoujo which literally translates to “girl” (or in this context, “girl’s comics”). This style of comics caters exclusively to the female demographic and is massively successful, unlike the feeble attempts made by western companies in the past (such as Marvel creating a mini-series based on the X-Men villain Emma Frost which was aimed at a teen girl audience…that then had this for a cover).

One popular style of comic that is often linked with Shoujo is known as Yaoi, which literally translates as “Boy Love”. These comics are about homosexual male love and are hugely popular with women all around the world. Despite the popular belief that Yaoi is a product of the past decade or so, Yaoi has been a popular staple of manga since the beginning. This can be proven with the series Eroica Yori Ai O Komete (also known as From Eroica with Love), whose main characters are based off the band members of Led Zeppelin and has been running since the time when Led Zeppelin were still active as a band! 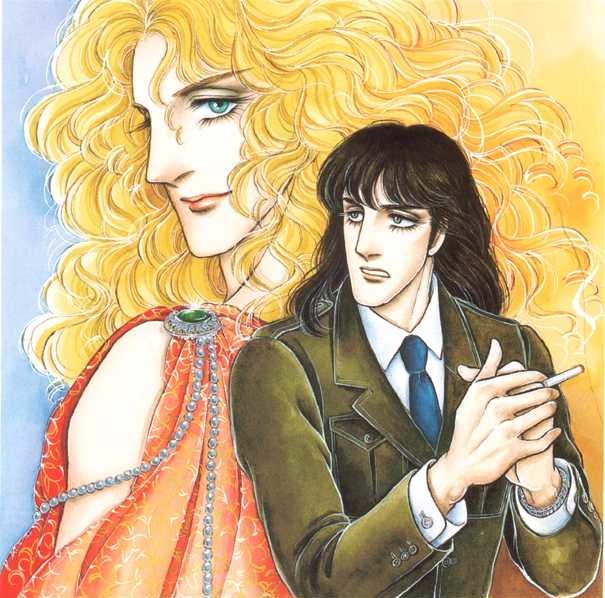 From Eroica with Love is about an openly gay nobleman called Dorian Red, who is an art thief by night; visually he is based off of Robert Plant. He is joined by a detective named Klauss who is based on Jimmy Page. Together they hang out with their friend Bonham (no guesses for who he is based on) and go on wacky adventures. 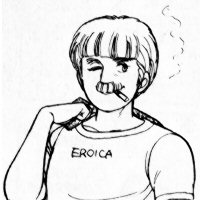 No one is more kawaii than Bonham-kun

The main purpose of the story is the will-they/won’t-they between Dorian and Klauss; as the two have spent the entire comic’s run flirting with each other without progressing to anything sexual.

If you were one of those people who waited a long time to see if Ross and Rachel got together, or Daphne and Niles, or even Mulder or Scully, then you have felt only a fraction of the pain that fans of Eroica have experienced. This series started in 1976 and is still going. Next year is the comic’s fortieth anniversary and these two guys haven’t even kissed yet.  Let’s just hope that series creator Yasuko Aoike doesn’t drop dead and start climbing the stairway to heaven before she gets around to drawing Dorian and Klauss holding hands. 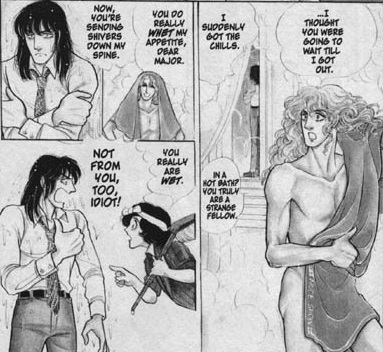 2 – Bruce Willis Is The Jackal 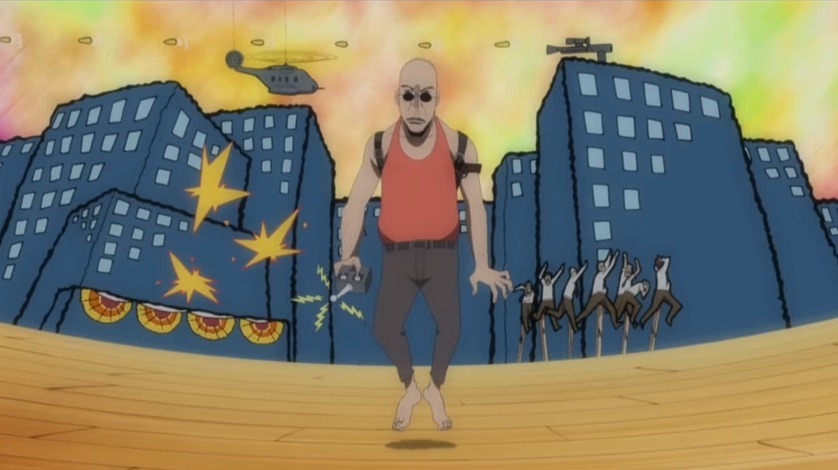 Hellsing is an action/horror manga about a modern day version of Dracula (who uses the oh so original name of Alucard) who serves the Van Hellsing family as a monster hunter. He is a member of the titular Hellsing organization that deals with vampires showing up in the United Kingdom. The series has been adapted into two different anime series; the second of which was called Hellsing Ultimate (which was more faithful to the original manga). It is during this series that the main character has a peculiar dream where he meets a ghost with a familiar face.

One of Alucard’s handguns is named “The Jackal”. During his dream, Alucard encounters the spirit of The Jackal who also happens to be the actor who played the title character of a movie by that name, Bruce Willis. Jackal Willis (as he calls himself) wants Alucard to share in his adventures, such as recreating Die Hard, Pulp Fiction, Armageddon, The Sixth Sense, and The Fifth Element. After a brief appearance by Christopher Walken and Tom Berenger, the dream ends and is never brought up again. The scene exists as an action-packed but ultimately pointless addition to the series; kind of like all of Bruce Willis’ films after Sin City. 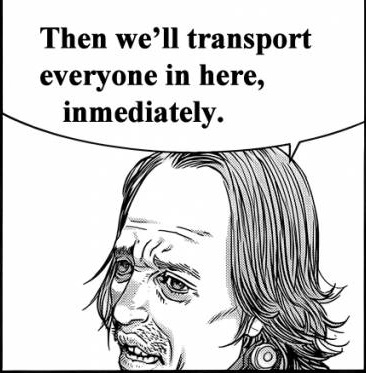 During the final arc of the series Gantz (see #7); the planet earth has been invaded by aliens and it is up to the Gantz teams from all around the world to unite and stop them. At one point during the invasion a battle occurs between the human Gantz soldiers and the aliens, taking place aboard a massive spaceship. The humans eventually win, but find that the teleportation devices they use have stopped working. This leaves them trapped on the ship with no way of returning to Earth, and just when all seems lost, the leader of one of the American Gantz teams manages to get the teleporters working again. This illustrious hero and savior of the human race is… 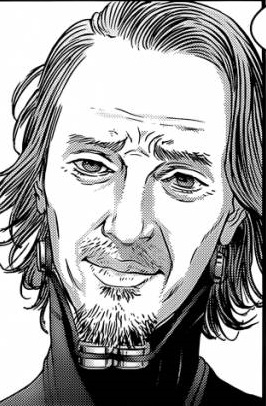 …the acclaimed actor Steve Buscemi! It seems that in the Gantz world he died at some point and has been moonlighting as an alien hunter in order to get his life back. This isn’t actually too far from the truth, as we know from his actions during 9/11 that Steve Buscemi is a true hero off the screen.

This isn’t the only time that Steve Buscemi has starred in a manga, however. The current biggest selling anime & manga in the world (as well as being the biggest selling comic in the world) is a swashbuckling pirate series called One Piece. One of the main characters in One Piece is a chef named Sanji, who is a ladies man that is always dressed in fine clothes and has a blond hair with a center parting. 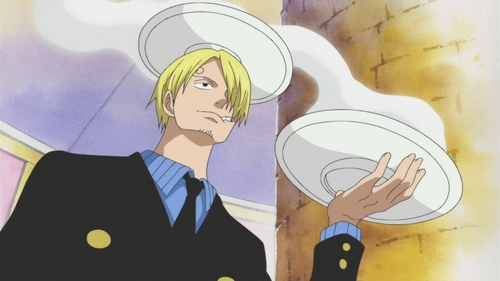 It is due to these characteristics that most fans of the series thought Sanji was based on Leonardo DiCaprio (from his Titanic/Romeo & Juliet era of films). The truth of Sanji’s design was revealed in the letters section of One Piece volume 68. It turns out that the handsome, debonair Sanji was actually based on Mr Pink from Reservoir Dogs, who was played by… Steve Buscemi.

So there we have it; a man who can be charitably described as resembling a particularly handsome frog has formed the basis for characters in two of the biggest comic book series of all time. That is something he can be proud of as he stares at the empty space on his trophy shelf that was reserved for his Boardwalk Empire Emmys.

I for one welcome our White Walker overlords. Along with Robot's Voice, I have also written articles and videos for Cracked, Top Tenz and Dorkly.