Remember that sex scene applause I mentioned? Yeah, it deserved it. All of them did. Sex is treated exactly the right way in this show (in my humble opinion). In its pleasurable form, it’s fun and frankly acrobatic. They break Luke’s bed. They break his bed! Though we’re really seeing no nudity here, it’s raw and it’s aggressive. The scene (in the pic above) where Jessica and Luke have sex after discovering that they both have “gifts” is both steamy and hysterical. Look at his grin when he discovers that Jessica is a pair of human fuzzy handcuffs! Jess is happy to know that she can bite him hard with no marks. Come on, guys. This is awesome! Sex isn’t treated as a taboo or forbidden thing here and it’s still hot as hell (‘s kitchen). There’s no embarrassment when Jess walks in while Trish is getting it on with Simpson. No one cares that he walks out in his boxer briefs. The scene between Hogarth and Pam on her desk – well I dare you to watch and not have to go take a cold shower. This is exactly as it should be.

Even more important is that – although there is a discussion of rape and we see all the after effects and trauma of the acts, we don’t have to watch it happen. I know that’s a controversial statement, but after the issues that many of us had with some of the rape scenes in Game of Thrones and whether or not they were “part of the story” or thrown in there for shock value, I think this was a good move. Oh, we get how horrible it was. We know the lasting effects it has, the loss of control. I think that’s the point. There are plenty of shocking scenes in this show, from scissor stabbings to head smashing to being sliced to bits a cut at a time to watching someone break through a door a la The Shining. We get the point. Oh boy, do we get the point. 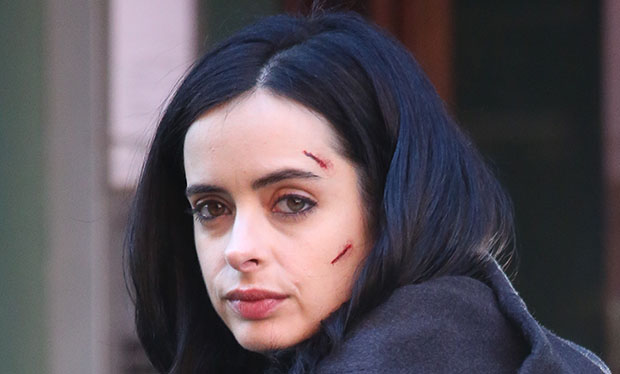 When we first meet Jessica Jones, she’s been through hell. She’s also suffering from PTSD. We see all the classic symptoms presented. She’s self-medicating with booze. She has flashbacks and panic attacks. She’s having nightmares. She’s showing signs of hyper-vigilance, constantly on edge. Of course, she certainly has a pretty damn good reason. People keep showing up in her apartment without knocking. She has violent outbursts, throwing her loud neighbor Robin across the room. (She kind of deserved it.) She’s broken off connections between herself and the people she cares about. Okay, the one person she cares about; Trish.

However, what we also see is something called Post-Traumatic Growth, or PTG. Jessica hasn’t given up. She’s not completely disappearing. She’s still displaying compassion to people like Malcolm, helping him when he’s on drugs, feeding him and helping him get off heroin. (At least I think that’s what it was.) She’s still working at her job. She gathers together survivors of Kilgrave’s mind control and forms a support group for them, though she rarely goes herself. She refuses to give up the fight and continues to find a sense of purpose that started way back before Kilgrave when she used her powers to save a little girl (while dressed as a sandwich, no less).

We also see this in Trish, who is a survivor of parental abuse. Though she does build that fortress and is training in martial arts, she’s not doing it for revenge. She’s doing it to help the world and be a hero. She’s not locking herself away from work and relationships. She’s no longer self-medicating. (Well, she does have that red pill moment, but there really was no other choice.)

We see it in Luke Cage, who lost his wife. We definitely see the darker side of him when he goes after the bus driver he believes killed his wife, but we also see his commitment to helping Jessica, his willingness to have a relationship with her even after his loss, and even his refusal to hurt attack dogs. Seriously, you have to love a man who loves dogs. It’s the law. 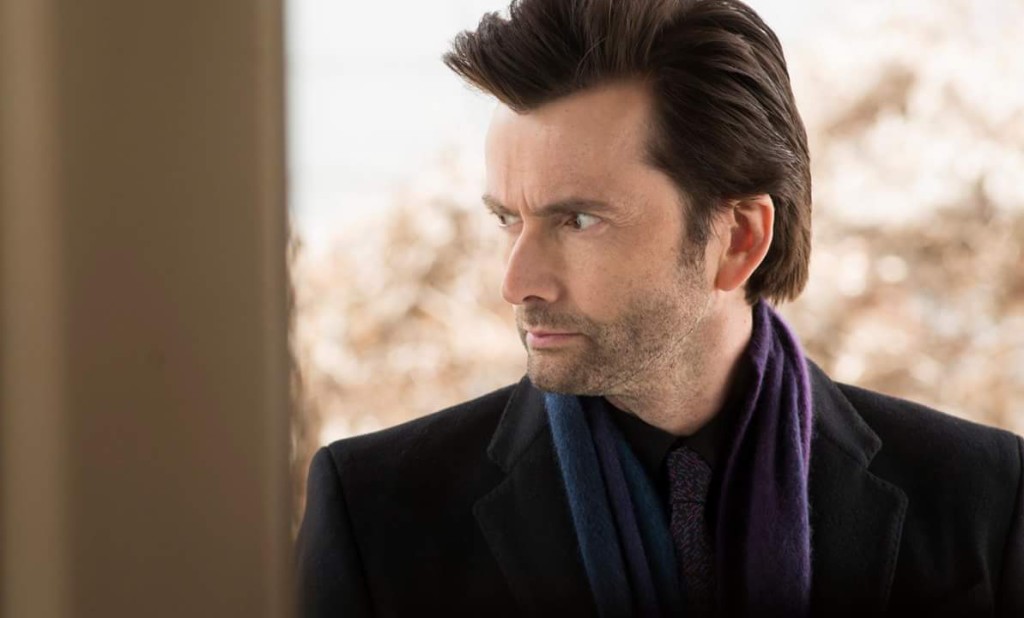 7 – A Villain Who Will Haunt Your Dreams

Kilgrave is one of the most well-drawn characters I’ve yet seen in the Marvel Universe, and that’s after watching the powerhouse performance by Vincent D’Onofrio in Daredevil. First of all, his presence is felt long before he makes any sort of real appearance. The first time we see him in any detail is episode 5. By then, we’ve learned so much about what he’s done that we’re jumping every time the light gets the least bit purple, as it does whenever he’s mentioned or a character feels his presence. Once he’s in, though, David Tennant is the very opposite of Kingpin. He’s charming (in a psychotic, nut job sort of way). He chews up the scenery. He makes you love to hate him. He’s pure evil and he’s fine with that. He shows no remorse and feels like a villain in a fairy tale. Until …

It’s a risk to not even try to make a character like this the least bit sympathetic until very late in the season. We spend a lot of time learning about the limits of his powers, from the drug that can take him out to his powers lasting 12 hours (until they don’t) to the fact that there needs to be air between Kilgrave and his victims for the mind control to take effect, and that he has to use his voice. We don’t get his backstory until very late. It’s Tennant’s performance that makes this work and how sparingly they actually use him for half the season.

Once we jump in though, we learn exactly how complex he is. Kilgrave has no compassion and no feeling of empathy. We learn that as a young boy, he was part of a series of experiments on children. (Big spoilers here.) He claims (and the footage found on the thumb drive that got Reva killed supports this) that his parents were cruel, trying to give him super powers. Later we learn that his parents were actually trying to save him from a virus that would have left him brain dead by age 12. We see exactly how cruel he is to them, going as far as making his mother stab herself to death with scissors and having someone cut off his father’s arms after he uses him to create a serum to boost the virus (which gives him his powers) so he can use it for far longer and across distances. That’s a big thing about Kilgrave. He never does anything himself. He uses everyone else to do his dirty work.

What’s terribly creepy is that he really seems to love Jessica, despite not really understanding what the word means, and has no real understanding of why she can’t love him back. He even tells her that because of his powers, he’s never known if anyone really did anything for him because they really wanted to. In his head, he believes that Jessica chose to stay with him during the few seconds free of his control. Part of knowing this side of him leads Jessica to see if she can get him to use his powers for good. He seems to get a kick out of saving people, but clearly still doesn’t get it.

Kilgrave will do anything for his own ends (including buying Jessica’s childhood home and setting it up like a shrine to when she lived there), but is so good at manipulation that even when locked in a room that won’t let him use his powers, the other characters comment on how it was impossible not to feel sorry for him. The genius of this character is his ability to make others doubt themselves. Is Jess really free? Did she remember wrong and actually choose to stay with him? Was Malcolm really weak enough to become an addict without his help? Did Jessica really kill Reva of her own volition since Kilgrave never actually said the word “kill?” Loss of control is one of the scariest things out there and Kilgrave’s powers are sure to keep you up at night. I mean, unless you feel like sharing Jessica’s booze. Who wants a shot? Shudder. You’ll never be able to watch Doctor Who the same way again!

If this is only the second offering in the Marvel/Netflix lead up to The Defenders, it promises some serious entertainment in the coming months and years, between Daredevil Season 2, Luke Cage and Iron Fist. I’m not sure my little geek heart can take it.

Jenna Busch (@JennaBusch) is the founder and Editor-in-Chief of Legion of Leia and has hosted and written for sites like IGN, AOL, Huffington Post and more. She co-hosted Cocktails With Stan with the legendary Stan Lee and has appeared on Attack of the Show, Fresh Ink, Tabletop with Wil Wheaton, in the documentary She Makes Comics, on NPR and Al Jazeera America, and has covered film/TV/gaming/comics for years. She's currently a co-host on Most Craved. She's been published in the comics anthology Womanthology, is a chapter author for Star Wars Psychology: Dark Side of the Mind, Game of Thrones Psychology and Star Trek Psychology, and owns a terrifying amount of swords and 20-sided dice. There are also those My Little Pony trailer voice overs that give one nightmares.