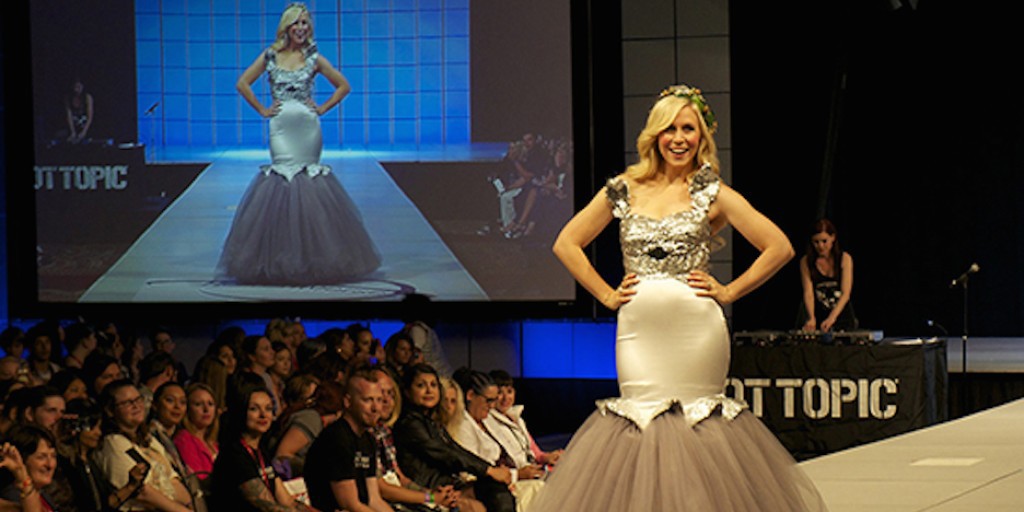 Ashley Eckstein at the Her Universe fashion show

JB: Do you think they had any idea how successful it would end up being?

AE: No, I don’t think so at the time. I know they hoped it would be. I can’t tell you what it meant to have Lucasfilm have my back and really, they were always there to support me when I needed it. But they did tell me at the beginning, “We have tried to sell female merchandise in the past and it hasn’t been successful. Why are you going to be different?” I said, “Well, you know, first and foremost, we’re going to go directly to the fans. We’re going to ask for their help.” From day one I said, this is not a solo effort by me. This needs to be a group effort. United we stand, divided we fall. If we want change, if we want more merchandise for female fans, together we have to demand it. 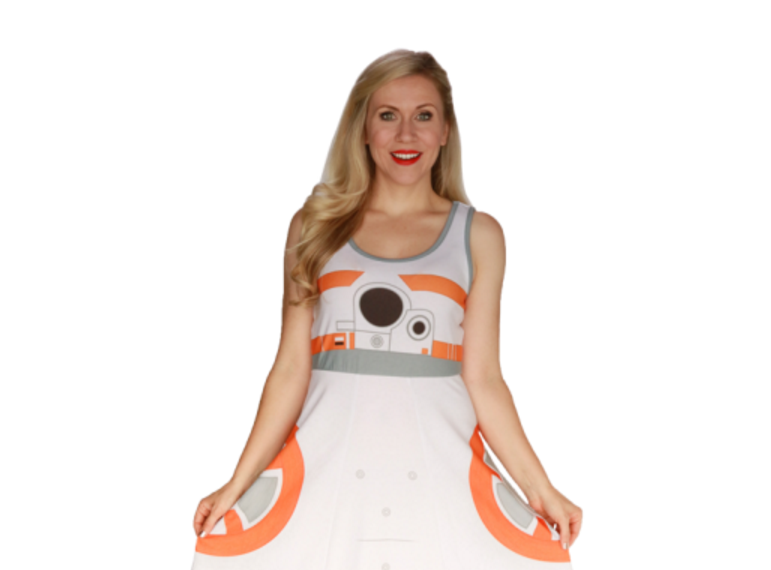 Ashley Eckstein in the Her Universe BB-8 dress

So I told them I was going to go grassroots. I’m going straight to the fans at conventions and I’m going to ask for their help. I’m going to ask what they want, and I’m not going to offer them a single pink t-shirt for a very long time! [laughs]Because what they were doing is, they were designing fifteen shirts for boys, and then as an afterthought they’d say, oh, I guess maybe we should maybe design a shirt for girls. They put it on a pink t-shirt, and put “I heart Star Wars” and call it a day. And I said, we don’t want that! We want a black t-shirt with Darth Vader on it. We want the Boba Fett symbol on a shirt, on a red shirt, on a navy shirt. We want a blue shirt! We want the same things the guys have but for feminine silhouettes. It definitely caught a lot of people by surprise. That I specifically, that I purposefully didn’t have a single pink piece of apparel for at least the first two years. I think there were pink rhinestones on a hat that I also offered in red and purple, but that was it. The rest was almost like what they considered was the opposite of what you would give to a girl, and that’s what we did. I have to say, we proved, with the fans, that this could be a success. And Jenna, you know this; I think more than the merchandise, the important thing was the community aspect, because when we’re all together, and you starting Legion of Leia – what struck me most was all the girls and women that were being bullied for liking Star Wars. I just read story after story, heartbreaking stories of women and little girls that were being bullied and that didn’t feel like they could be themselves. As you know, since you’re a fangirl inspiration to me –

AE: You exude what it means to be yourself and be proud of being a fangirl. I remember when I met you and you were so warm and welcoming. You were like, you’re another fangirl and you love Star Wars. Welcome to our community. I wanted to create that because I felt like the only way to stop bullying was to create a positive environment where girls felt comfortable to step into the spotlight and say, “Hi, I’m Ashley, and I love Star Wars and I’m a girl.” The biggest thing that caught me by surprise was not that we got so many girls, but that we got guys, so many guys – I would say that half of our supporters in the beginning and still today are men, that are supporting the women in their lives. Supporting their moms and their sisters, their wives, their daughters saying, “We watch Star Wars together.” Story after story, I heard that. It was important for me to start a community in the beginning to combat bullying. Being a Star Wars fan is a part of your identity. It’s a way of life. That’s not just a trend. That’s not something you’re into for a minute and then you’re no longer a fan. That’s something you are for life and it’s no way to live your life if you can’t be truly who you are. 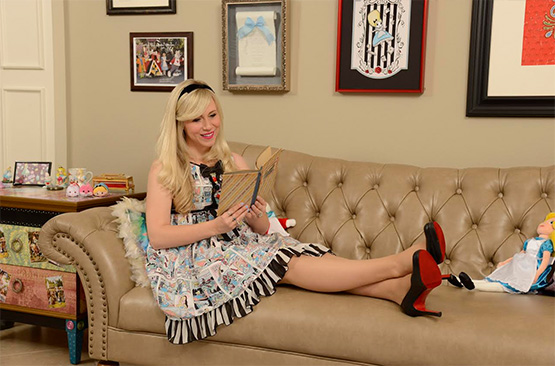 JB: Now you’ve starting a publishing arm for the company called Her Universe Press! How is that going so far?

AE: It’s been great so far! We’ve already signed a couple book deals since New York Comic-Con and hopefully another one soon. They were girls that submitted after the panel. We didn’t know them. We didn’t know that they were writing books. It was just a blind submission through out website and we’re reviewing several other manuscripts. Immediately after we announced the submissions, we received over fifty submissions immediately from men and women, actually. Even though Her Universe and Her Universe press is focused on women, I never want to – I want it to be inclusive. That’s our message. This genre, these franchises we love so much, they’re not just for men. They’re not just for women. They’re for everyone. We want our community to be an inclusive environment so we’ve even received submissions from men as well. We’re reviewing all the stories. If we think it’s a fit for our audience, we want to hear the stories.

We’ve already signed a couple deals. Our first book, “Weirdest” by Heather Nuhfer is coming out in April and I’m just so excited about this book. I really think it’s going to speak to fangirls of all ages. It’s a mid-grade book, which you’d consider for younger readers, like tween readers, but I was obsessed with every page. I could just see myself in this book and in this character. I know fangirls of all ages are going to love it. Then there is a story I’m actually working on with Anne Convery and Dave Filoni – Anne is Dave’s wife, but what most people don’t know about Anne, if you haven’t met her, she’s been another fangirl icon of mine. She’s just an insanely talented writer that has never been professionally published. She and I came up with an original concept together and she wrote the book. And Dave is illustrating it. That will come out next summer and it’s just this steampunk story about a twelve-year-old girl that is set in an alternate universe of gold rush California. It’s such an awesome story! It’s an illustrated novel for all ages. It’s awesome. I’m excited for people to see it. And the book deals that we’re doing now, definitely look for them in 2016. Once the books start coming out, you’ll hear from us about events and panels and things like that.

The reason I started it was really, truly because of the fans. I had no intention of starting a publishing imprint. Trust me, it was not on my radar! But I just heard story after story of fans writing these books and self-publishing them because they didn’t know how to get a deal with a publisher. They didn’t have an agent. I felt like it was such a shame to not provide a platform for all of these fans that were very, very talented and writing their own stories and writing their own books. I wanted to give them a platform to have their work professionally published. 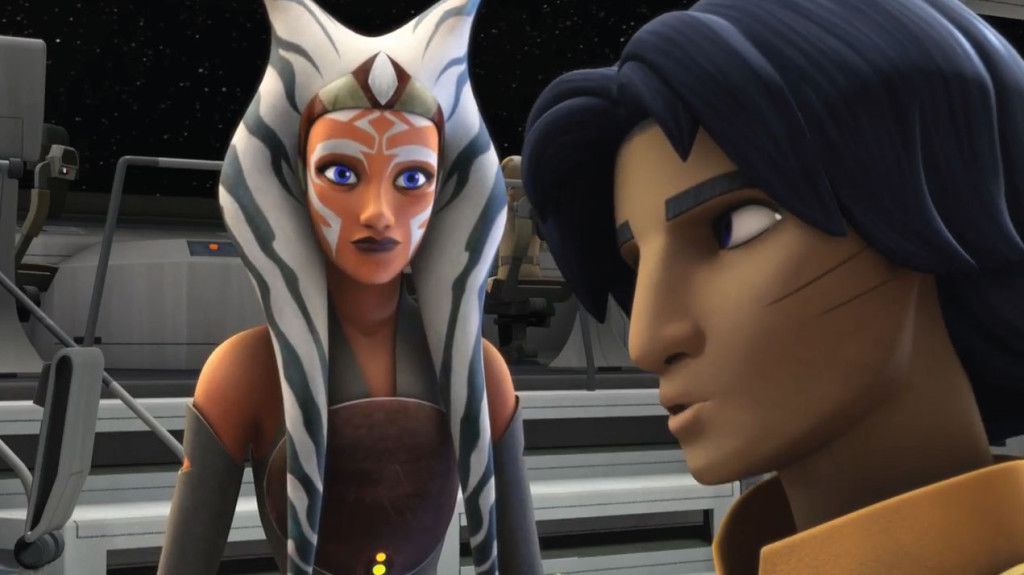 JB: Are you doing any non-fiction?

JB: That’s amazing! What other new projects do you have coming out next?

AE: Well, a new project I’m really excited about on the acting front, other than the second half of Season 2 of Star Wars Rebels, which will truly be mind-blowing, but I’m the voice of Cheetah on DC Superhero Girls. I’m so proud to be a part of this new show! DC – I’ve now gotten to work with them for the past several months. We’ve had meetings behind-the-scenes, and they have just – first and foremost, they truly care about their female fans. I can tell you, I’ve had many conversations and they’ve been listening to their fans. They so passionately care about catering to, especially, their young, female fans and to introduce them to the DC Universe. They’ve teamed up with Mattel and major partners and they’re really creating a major franchise. I think they’re going to make a massive difference in this whole stereotype that this genre is for men and boys. DC is just coming after it head on and saying, “Nope! Our universe is for everyone.”  They are making it very inviting for girls and female fans. It’s such a cute show. They’ve got a major initiative that’s already online, but they have a ton of stuff that’s coming out next year. I’m excited about that. I’m honored to be a part of it. There is also a really cool thing that is coming out for Her Universe in the spring that I can’t wait to talk to you about, but it’s too early to announce it. In the meantime, DC Superhero Girls and lots and lots of Star Wars!

Follow Ashley on Twitter @HerUniverse and check out the website for Her Universe here. Star Wars Rebels has been renewed for a second season. Season 1 is now playing on Disney XD.

Jenna Busch (@JennaBusch) is the founder and Editor-in-Chief of Legion of Leia and has hosted and written for sites like IGN, AOL, Huffington Post and more. She co-hosted Cocktails With Stan with the legendary Stan Lee and has appeared on Attack of the Show, Fresh Ink, Tabletop with Wil Wheaton, in the documentary She Makes Comics, on NPR and Al Jazeera America, and has covered film/TV/gaming/comics for years. She's currently a co-host on Most Craved. She's been published in the comics anthology Womanthology, is a chapter author for Star Wars Psychology: Dark Side of the Mind, Game of Thrones Psychology and Star Trek Psychology, and owns a terrifying amount of swords and 20-sided dice. There are also those My Little Pony trailer voice overs that give one nightmares.