Mutant Year Zero: Road to Eden is a heartwarming tale of animal friendship set in post-apocalyptic Europe. A plucky duck and persistent piggy set out from the safety of their home on a perilous journey in search of Hammon, a lost farmhand. Prefer to watch our video breakdown? Check out the 2 Headed Hero YouTube channel, or click the video above!

Post-Apocalyptic X-Com By Way of Howard the Duck 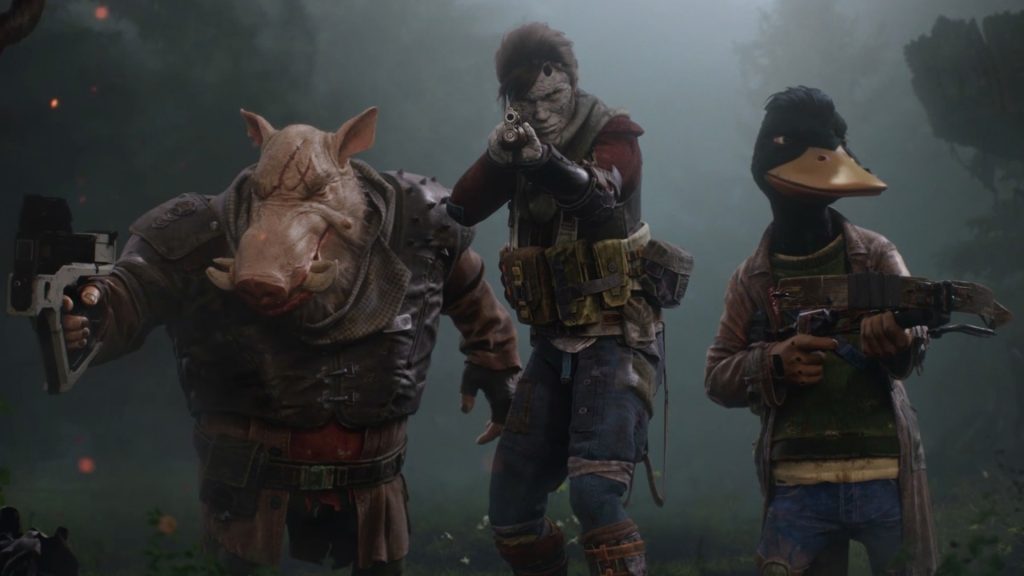 In addition to being one hell of a long title to put in a script, Mutant Year Zero: Road to Eden is a challenging stealth and strategy title. If I had to pick one phrase that would sum up the experience, “Post-Apocalyptic X-Com by way of Howard the Duck” would be pretty close to nailing it. The game’s mix of difficult turn-based tactical combat, stealth and ambushing mechanics, exploration, and a heavy helping of tongue-in-cheek humor all add up to a rewarding 12-to-14 hour experience. 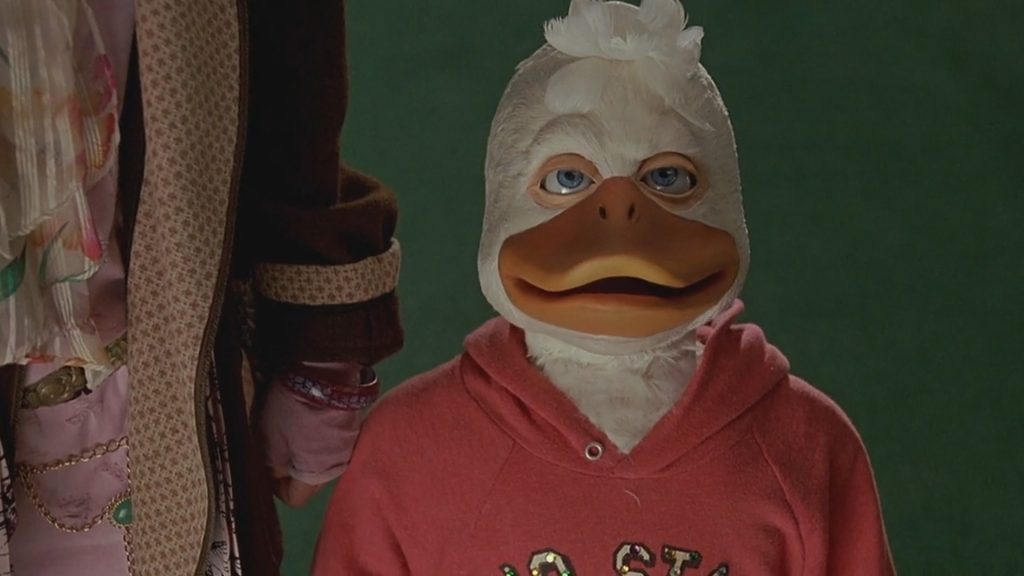 The Lay of the Land

From verdant valleys to snow-covered mountains, the environments in Mutant Year Zero are lush with detail. Used-future ruins teem with plants and wildlife – a far cry from the desolation found in similar settings such as Fallout. 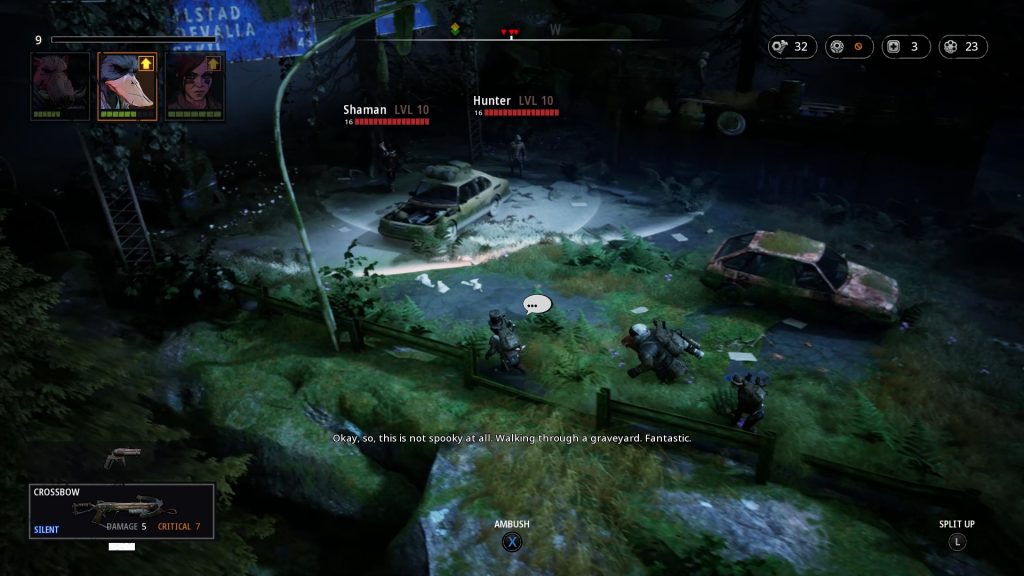 Maps are fairly small, but since you’ll spend most of the time in a zoomed-out exploration view, this level of environmental detail was a welcome one.

Once you get the chance to zoom in a little closer, you’ll be able to see that the members of your traveling freak show can be customized with equally detailed hats and outfits. All of these serve to add to the “used future Earth” theme found throughout Mutant Year Zero’s visuals. Characters are animated in detail, but the models themselves – even for the more “humanoid” combatants – seem to have some strangely exaggerated proportions. This is probably a stylistic choice, but still comes off a bit like having gangs of weird giant ten-year-olds running around the map. 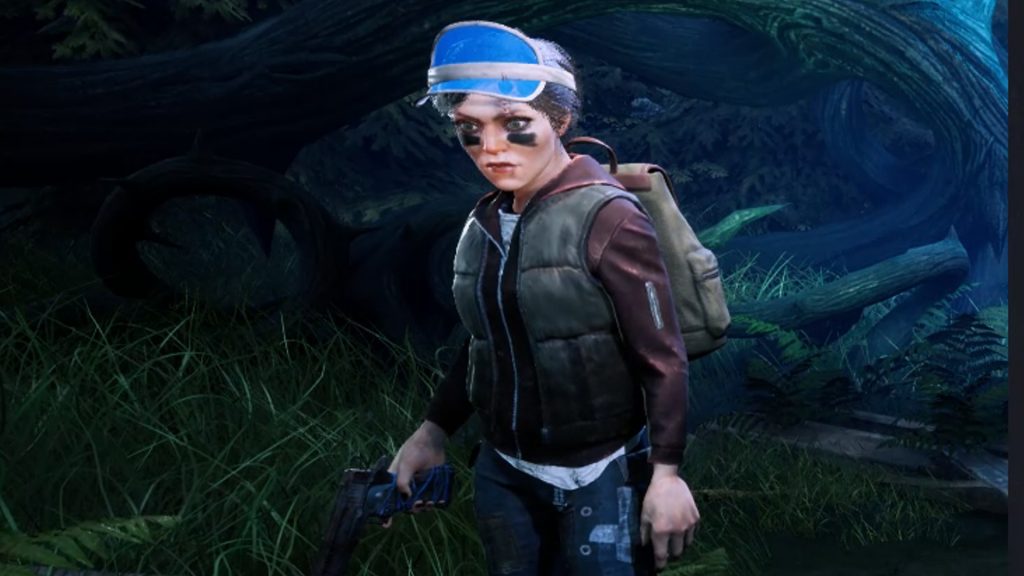 Ma’am, you should probably get that big giant head looked at. Also… maybe quit skipping limb day at the gym.

Mutant Year Zero tries for the dynamic X-Com “action cam” when it gets down to the gunplay. While the effort is appreciated, this is often where we see the game pop open at the seams. There’s the odd rare clipping issue, and bullets will sometimes fly directly through character models while still registering a miss. There’s also an occasional, but noticeable stutter when  initially arriving at a zone. Despite all these minor gripes, Mutant Year Zero doesn’t do that bad a job at taking advantage of Unreal Engine 4 to make the post-apocalypse look pretty good. 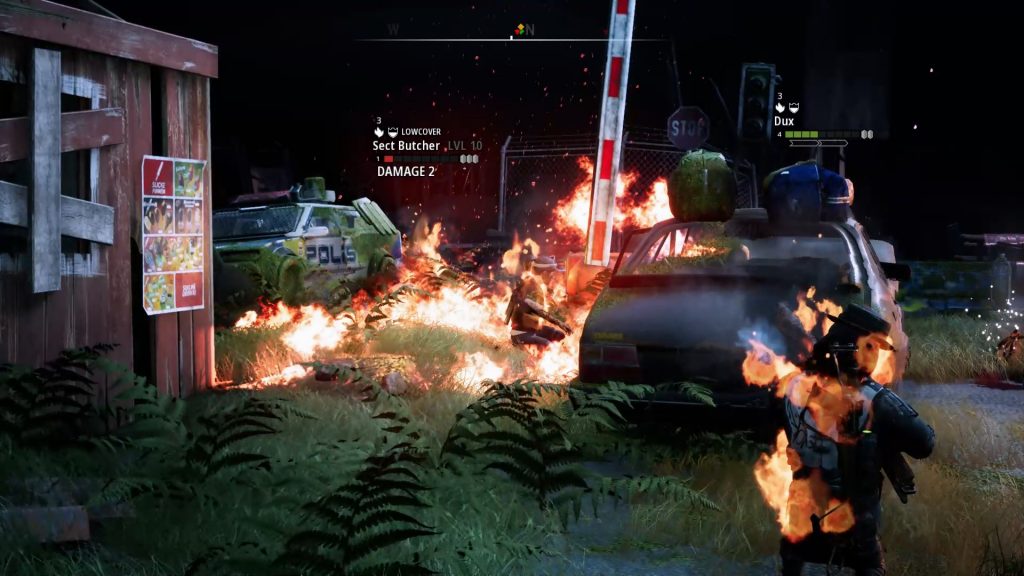 The game opens with a beautiful cutscene that does a great job of establishing characters and tone. The rest of the story cutscenes play out as motion graphics. Bormin, your tusked tough-guy pig mutant pal, serves as sort of a narrator throughout the story’s exposition, and the rest of the game’s voice lines share the same level of quality.

The Call of the Wild

Speaking of sounds, Mutant Year Zero is a treat for the ears. Your merry band of misfits banter back and forth while crunching through snow-covered ruins or thick forest floors. Eavesdropping on the cannibalistic citizens of the Zone yields some truly funny dialogs and important clues. Weapon effects are nice and meaty, especially the sharp thwack of a bullet  hitting its mark or the combustible poof of a molotov exploding. All of this is set on top of a synth-driven soundtrack that’s somewhat reminiscent of classic John Carpenter movies.

Strategy games that adhere to a grid system often try to mask this fact. Some attempt this with clever construction (such as the aforementioned X-Com series). Others try to get by with creative use of the setting, as seen in our recent review of Warhammer 40K Mechanicus. In contrast, Mutant Year Zero allows your motley crew to free-roam the environments in order to approach the dangers from an advantageous position – or sometimes even avoid them entirely. The sneaky exploration lends itself very well to controller support, but desk jockeys will find it to be equally playable with a keyboard and mouse. 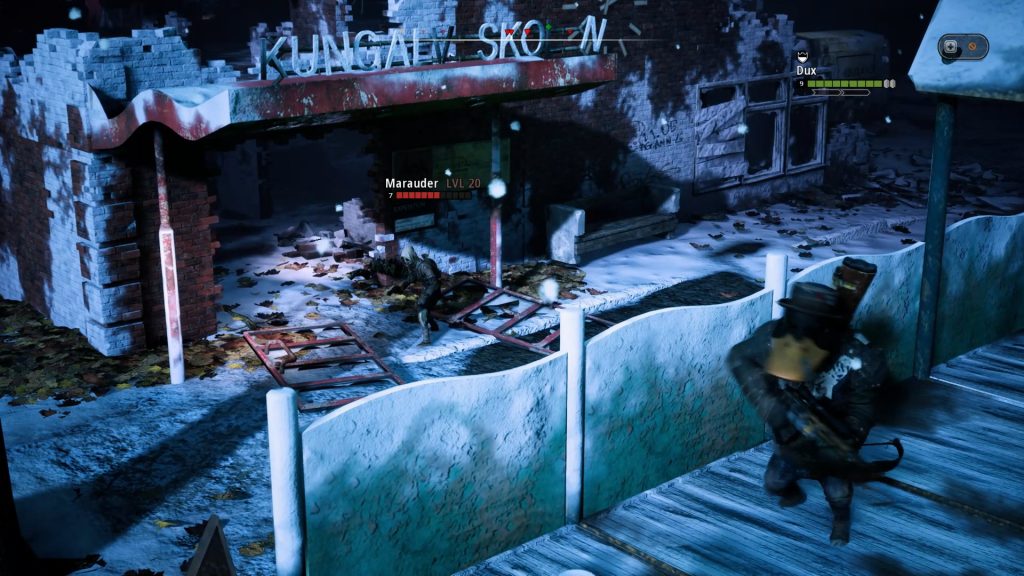 This explorative approach to deployment feels much more organic. The act of prowling through the zone, stealthily taking down raiders that stray too far from the group one by one until you can ambush their leaders, has a really satisfying feel. Since your trio of troublemakers is always outnumbered and outgunned, this stealth element becomes necessary to shave down the game’s encounters to a manageable size.

This is where Mutant Year Zero’s precarious balance starts to be an issue. You have to make doubly sure to do the mental math necessary to take a guard’s health pool down in one round, and more often than not you’ll be cutting it close by relying on critical hits. A single missed shot or misstep can bring the full brunt of the enemy forces down upon you, causing squad wipes and mission failures. Although a robust save system means little time will be lost, the temptation to save-scum your way through the stealth encounters is nearly irresistible. 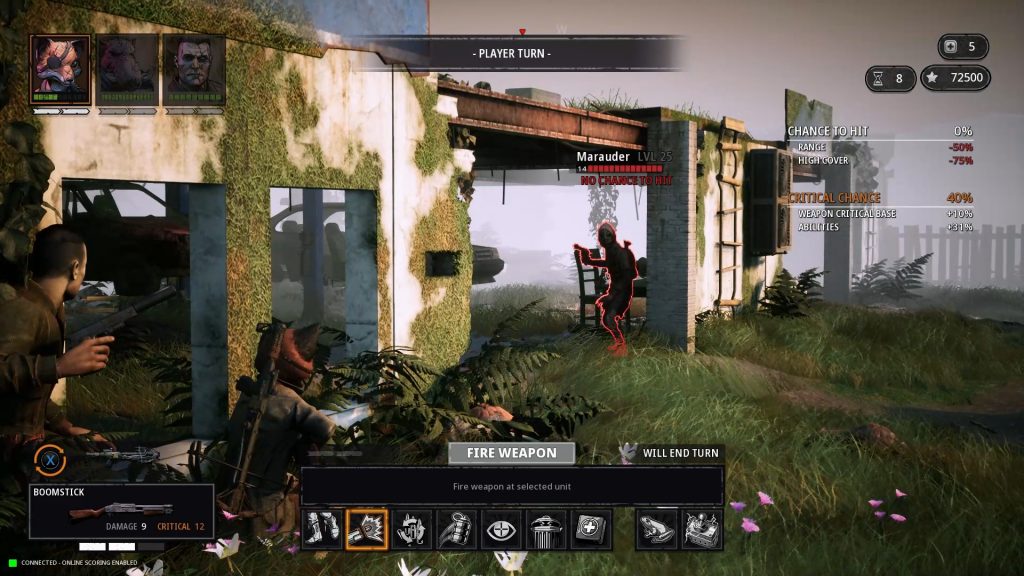 When you’re neck deep in the heat of the turn-based combat, the Stalkers can rely on a host of abilities and weapons to turn the tide. weapons can be modded and upgraded, and some additional squad perks can be unlocked by hunting down artifacts throughout the Zone.

Each mutant has their own skill tree to unlock (although several trees have overlapping abilities), and your choices are permanent. This can result in different playstyles depending on who you recruit to your squad. A group of corpse-eating halfmen is going to play far differently than a pack of frog-jumping snipers. 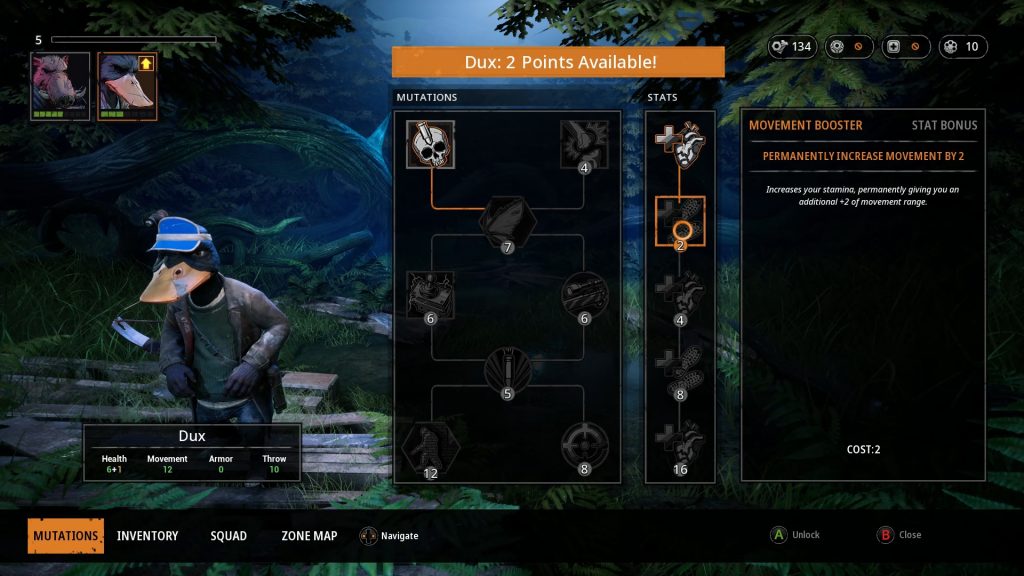 You’ll need every advantage since the bigger encounters can often come down to last hits. Scouring the maps for secret equipment and spare parts is all but needed. Backtracking to previously avoided encounters for precious experience can be vital to survival. Mutant Year Zero’s beginning is therefore the most brutal part of the entire experience, as players lack most of these special abilities and resources. Many famous post-apocalyptic CRPGs (Fallout, Wasteland 2, etc) feature this same kind of front-loaded difficulty curve, so it doesn’t feel too out of place to find it here.

The Brink of Balance

Mutant Year Zero does have selectable difficulty, but these settings seem to influence only damage done by the enemies, how often Stalkers can use their mutant powers, and how much health is recovered post-battle. Even on Normal difficulty, the experience is tough enough to give experienced strategy gamers a hard time.

Still, enemy AI is a little on the weak side. After some testing, we were able to find that enemies aren’t beholden to ability cooldowns or reloading mechanics, which is a little disappointing. However, it’s possible to bait the enemy factions into attacking each other and then keeping your distance until you can move in to mop up the survivors. These chaotic three sided battles are some of the most fun fights in the game. 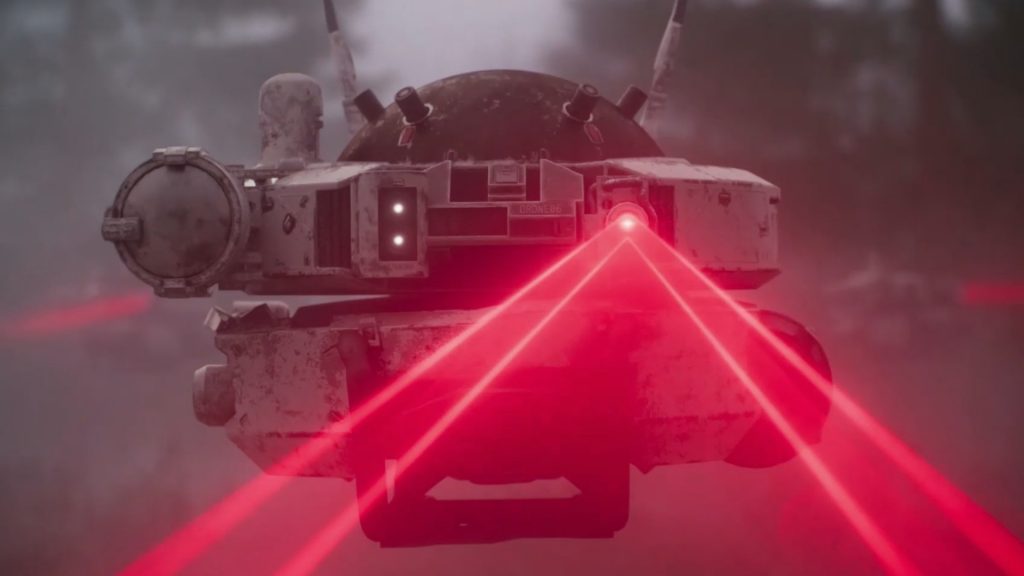 While Mutant Year Zero isn’t the most polished or lengthy strategy experience out there, it’s plenty of game for the price tag. It adds a ton of goofy charm to a genre that usually comes off as overly grim and serious. Recent updates have added a sort of “remix mode” in the form of Stalker Trials to give the game more replayability. If, by some stretch of the imagination, you found the game too easy, there’s two more brutal difficulty levels. An upcoming expansion is due to come out this June, which directly addresses complaints about the game’s length.

Mutant Year Zero is far from boring. The challenging gameplay and endearing writing make it a great choice for a rainy weekend. Strategy buffs should definitely keep an eye out for the new content DLC, and Nintendo fanatics can look forward to the upcoming Switch release on July 25.