Today’s BACKLOG.TXT cannonballs headfirst into The Dwarves, 2016’s flawed and forgotten, yet frankly fun, Frankensteinian creation from THQ Nordic and KINGart. Prefer to watch? Check out the video breakdown on 2 Headed Hero!

The Dwarves: Choose Your Own Fantasy Mosh Pit

Based on a 2003 fantasy novel by Markus Heitz, The Dwarves presents a strange amalgamation of gameplay. Physics elements combine with strategic combat and light RPG mechanics, all wrapped together under choose-your-own-adventure trimmings. 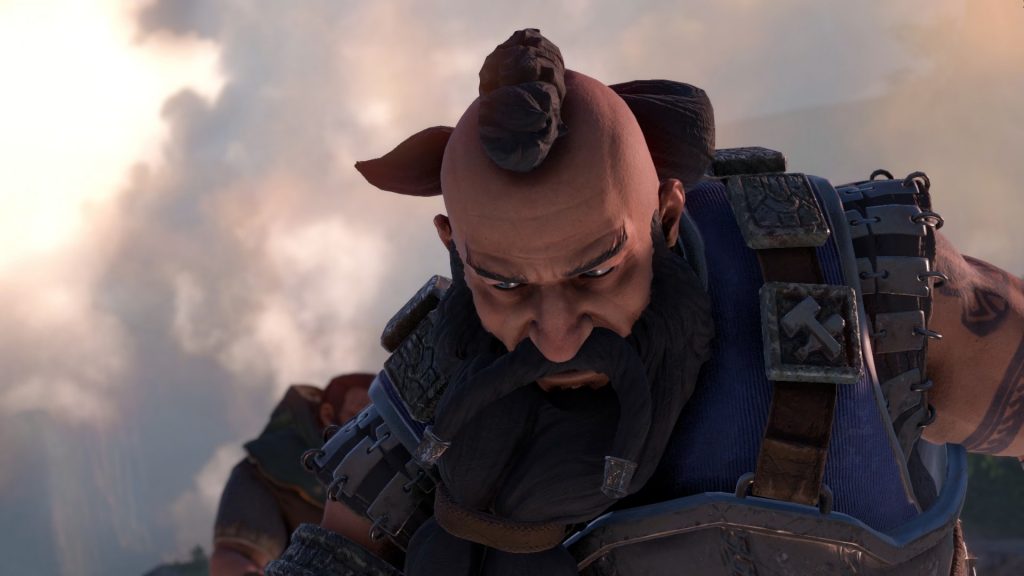 Boendil, the stalwart and somewhat stereotypical berserker, is a beacon of personality throughout the game.

After a brief tutorial battle, players take control of Tungdil Bolofar, an orphaned blacksmith, and swell the ranks of his expeditionary force. The task? Blaze a path into demonic lands to end an immortal evil, and discover the secrets behind Tungdil’s mysterious past. 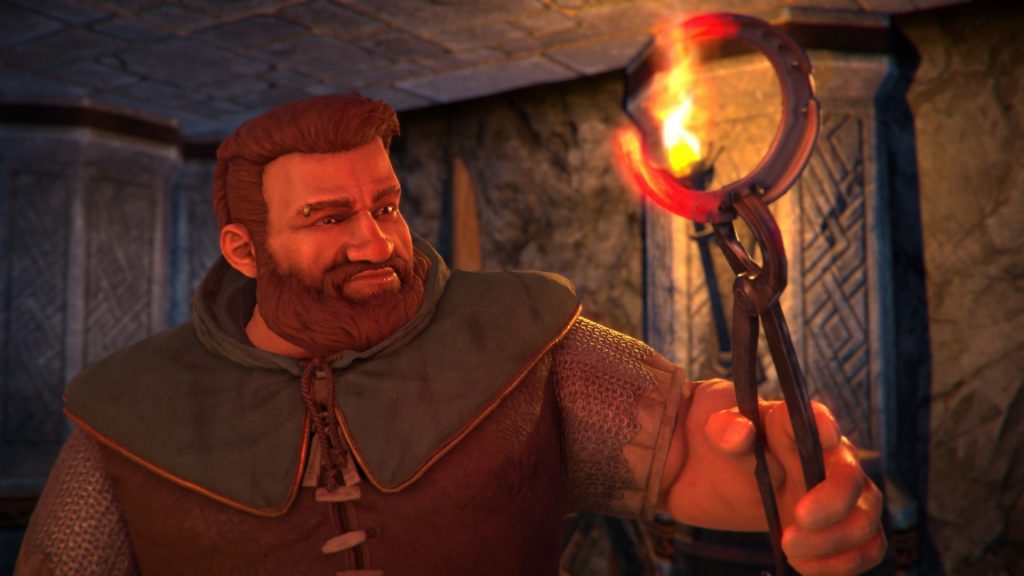 The earnest and naive Tungdil Bolofar serves as the story’s central focus.

German developer KINGart is mostly known for free-to-play children’s games and charming point-and-click adventure titles. By planting a mailed boot squarely in the strategy-RPG arena, The Dwarves represents a considerable step outside of their element. So, is this mixture up to recipe? Let’s jump in and find out.

The Dwarves is fairly pleasing to look at, with a surprising sense of scale to the encounters. Detailed character animations abound throughout the explorable areas, and this carries over to combat. Less care is paid to the motions of the Orcish hordes and shambling undead that oppose your heroes, but the sheer number of combatants the game throws your way is staggering. Some visual bugs do poke up from time to time, like floating body parts or misplaced decals, but overall it’s forgivable. The Dwarves’ epic high-fantasy style brings to mind some of the best battle scenes from Lord of the Rings, and does a great job of making the protagonists feel like a powerful squad of stumpy juggernauts. 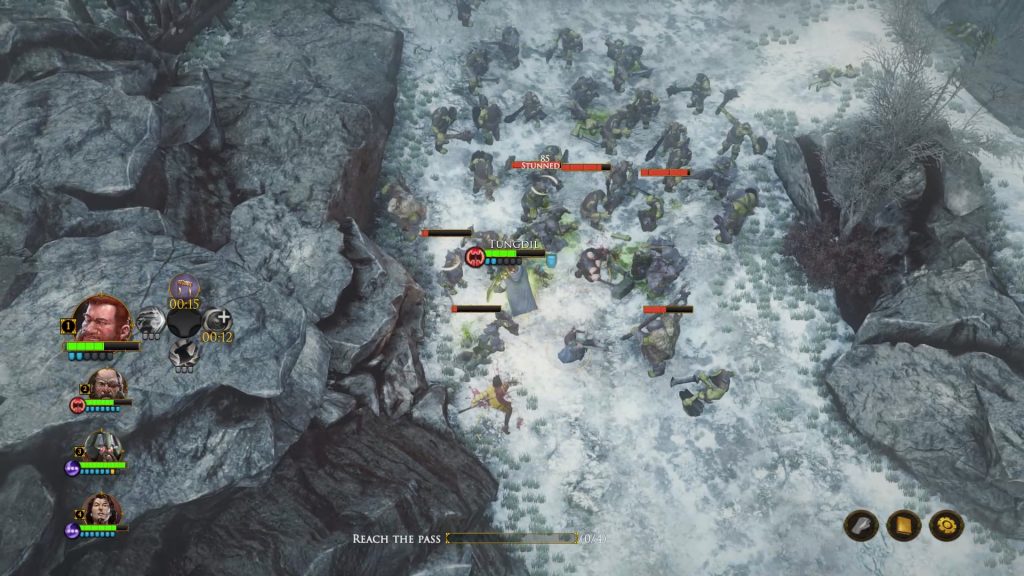 Traversing the overland areas has a more boardgamey vibe, with playing pieces shifting around during every turn. Food is a resource, and your ragtag group cannot easily heal without it, but dialog outcomes and scouring for secrets can help replenish your supplies. Stumbling upon a point of interest will often reveal encounters where Tungdil is offered choices in a choose-your-own-adventure style, giving the game some further replayability. On occasion, exploring reveals small explorable environments rife with clues. Poking around in these areas will often lead to side quests or further flesh out the world building for the realm of Girdlegard. 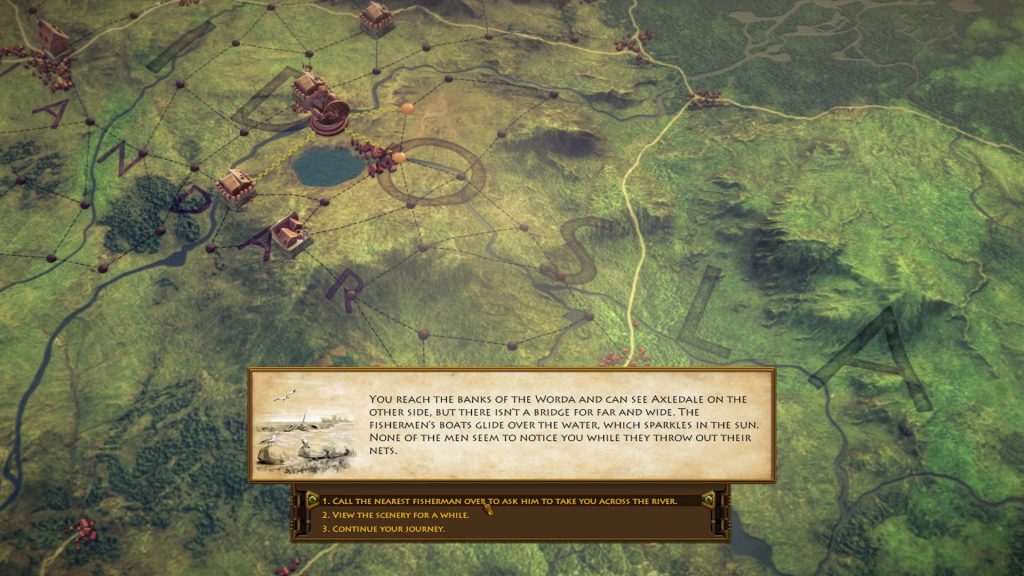 The Dwarves’ main story is mainly parceled out in a surprising amount of quality cutscenes. Other than a couple minor details (like the hair looking a little stiff), these cutscenes feel quite rewarding whenever they appear – and show no small portion of polish.

Much to my surprise, The Dwarves contained a fair amount of well-polished surprises for an “AA” budget title. Descriptive text, cutscenes, and conversations are all fully voiced. The voice work itself can be a bit of a mixed bag, but is overall far above average.

The main characters’ performances share the spotlight, and the narrator’s raspy tone is a wonderful touch, sweeping through the game’s descriptions like autumn leaves on the wind. German powermetal veterans Blind Guardian contribute a theme track, and the rest of the game’s music is comprised of delightful orchestral tunes. 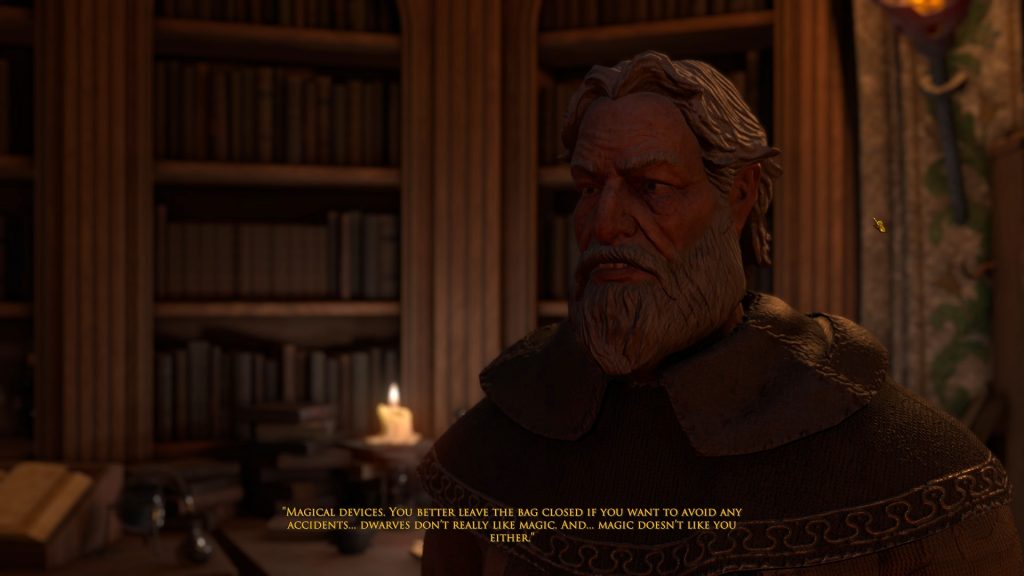 Many smaller roles, like the wizard Lot-Ionan, still have quality voice performances. In contrast, the evil Alfar and bloodthirsty Orcs you face down on the field seldom have spoken lines – which is definitely for the better.

On the battlefield, audio is little more than passable. Repetitive battle cries and blade clashes rule each fight, and even the most powerful abilities sound muted and anemic. It’s painfully average when compared to the dialog’s overall level of quality, but not offensive. 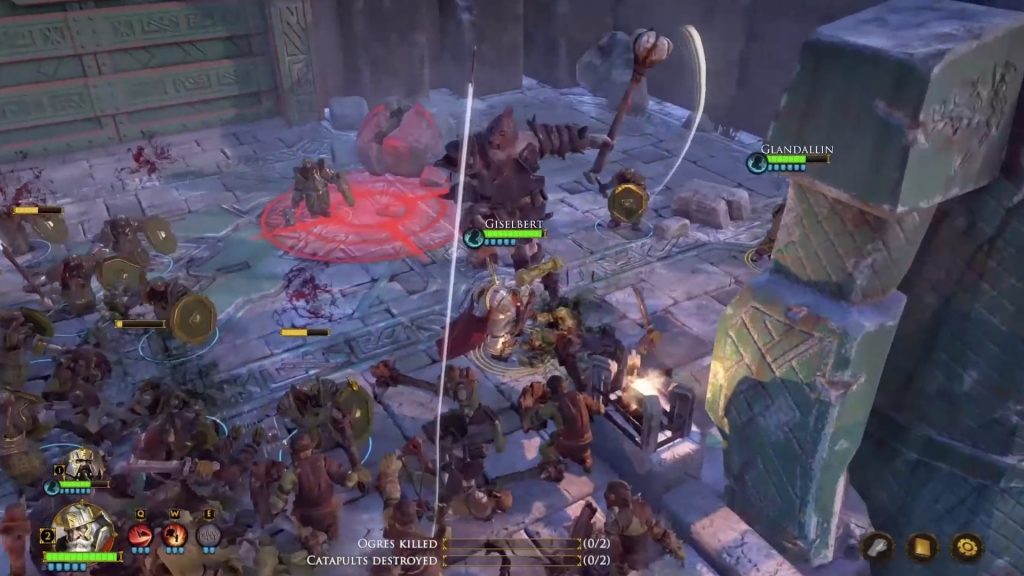 Clever writing abundant with dry humor saves the day here, and helps drive the tone home. Most of the members of your expedition don’t reveal a wealth of character depth, but there’s enough to create some interest and intrigue over The Dwarves’ brief twelve-hour journey. It’s easy to see that dialog and exposition is KINGart’s biggest strength. Both play to the source material and honor the developer’s adventure game roots.

The Dwarves has a fairly unique combat approach. Due to the physics-driven nature of the fights, players will be challenged to use their stocky strongmen’s abilities to the utmost in order to knock back, confuse, and control huge crowds of enemies. Movement carries momentum, and a full run can sometimes be used to stun the horde’s front-liners. The landscape itself is an advantage, if used strategically – or a curse for the inattentive.

Your squad size is limited to four. This doesn’t sound like much, but it makes for a potentially large toolbox. Each hero’s set of abilities is unique, mildly customizable, and built to add to their personality. Midway through the game, your roster will be filled with all manner of magicians, misfits, circus performers, and sideshow freaks. Ranged characters like Furgus can rain fiery crossbow bolts down from a hilltop, or a disguised Rodario can creep behind enemy lines to sow chaos. 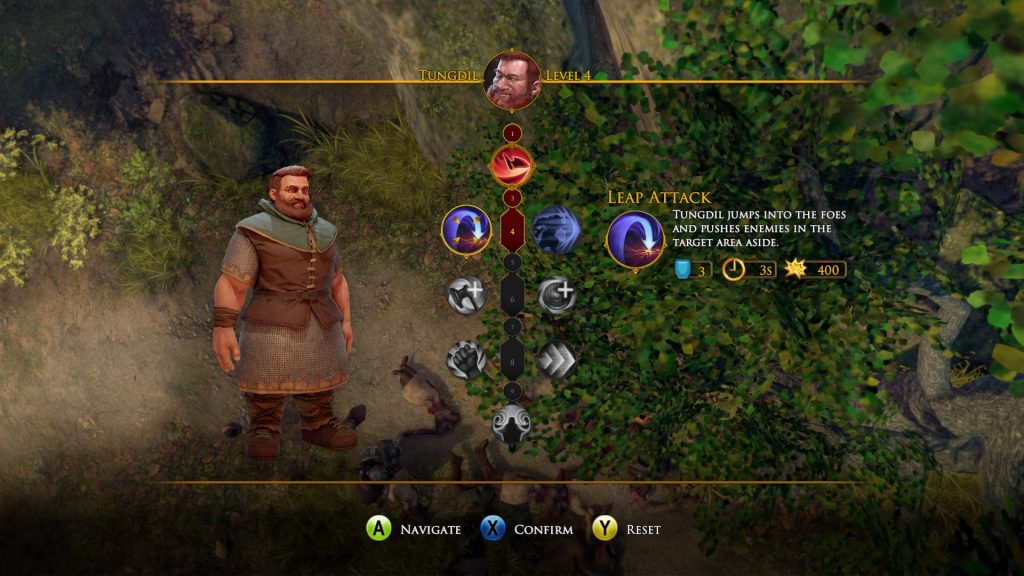 Success in The Dwarves is largely based on knowing the limitations of the character skills and using them with impeccable timing to create traps and kill zones without hitting your teammates.  I own-goaled my own team far more often than I care to admit, but friendly fire also applies to your enemies, and there’s a certain satisfaction in positioning orcs to send a hail of arrows into their buddies’ backs. Clever use of terrain, the pause feature, and complementary skill combos can ensure victory and even turn enemy attacks into yet another weapon in your arsenal.

The Dwarves is fun, but unpolished. The camera is locked to your group, and there’s no minimap or objective indicator, so missions can require some trial and error while you wander around to the goal. Skill descriptions are a little vague, making it hard to choose abilities upon level up. It’s hard to gauge a skill’s utility until they are used in a fight. Trading with merchants is kind of confusing, requiring more button presses than necessary.

There’s also a few bugs that were never quite shaken out. Enemy AI is sometimes spotty. A couple terrain bugs glitched me out of bounds or knocked Tungdil around while I was exploring.  One bug kept me from issuing orders to my team. A more serious one glitched menus and controls, and required me to force quit the game.  The game’s positive aspects kept me coming back despite these setbacks, but if the occasional bug is a deal breaker, you should consider yourself warned. 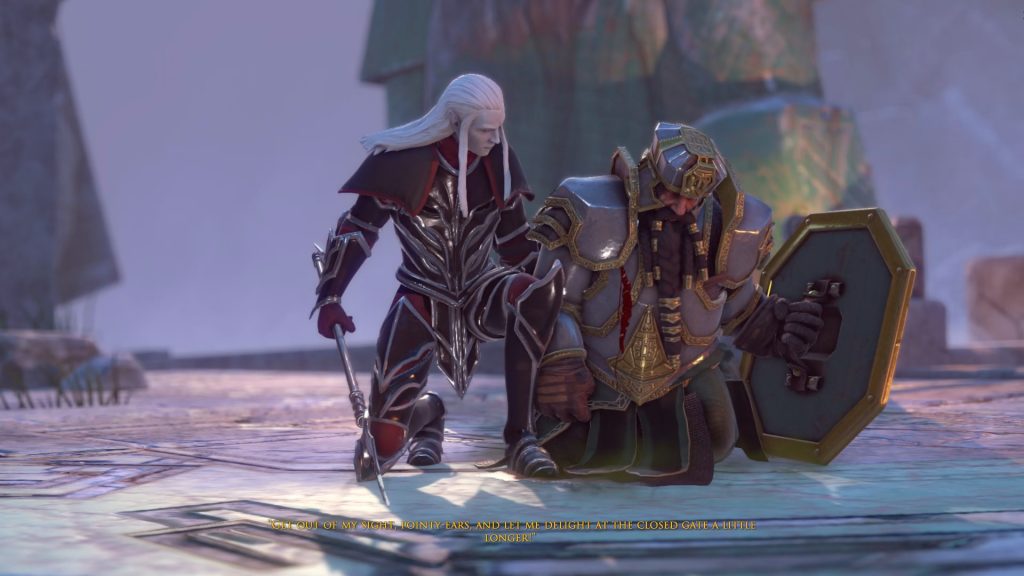 Back in my early days of computer gaming, I played a little-remembered pair of RPGs by the name of Dark Sun. The first game, Shattered Lands, and its sequel, Wake of the Ravager, were both deep and filled with impactful choices, meaningful dialog, and tactical combat. They were also both glitchy, exploitable, and unbalanced – and some of my favorite DOS games. 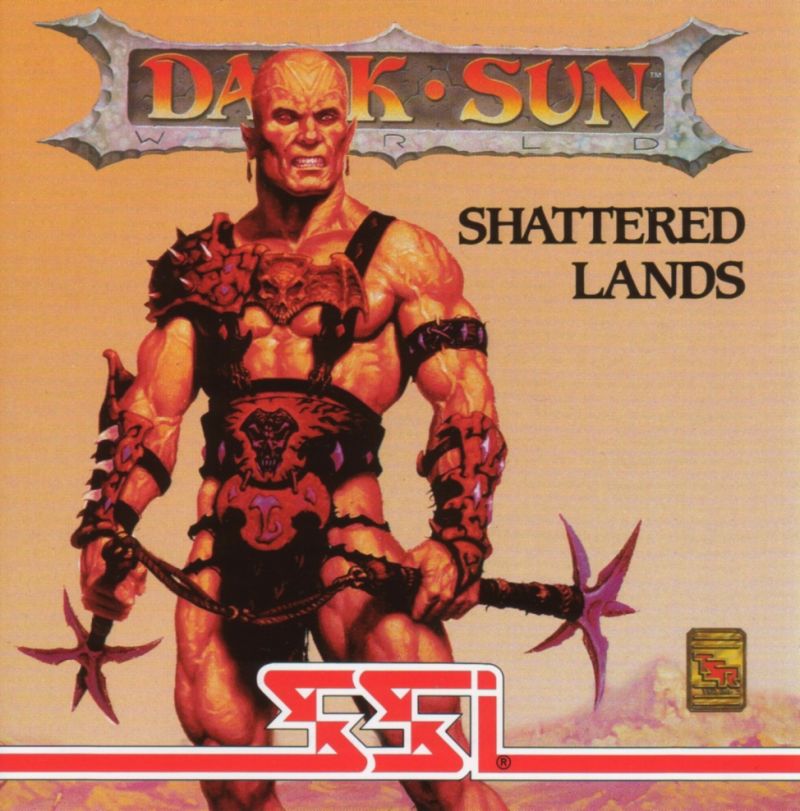 Dark Sun was ultimately about player choice. It was always fascinating to see what ridiculous spell combination, hidden secret, or overpowered item I could use to cheese my way past seemingly impossible fights. The Dwarves, while much shorter in length, struck many of the same chords.

The Light at the End

At the end of the tunnel, The Dwarves reminds me strongly of the same kind of fun that could be had in broken and unbalanced RPGs of the 90s and early 2000s. It’s Dragon Age Lite. Low calorie Neverwinter Nights. Basic Baldur’s Gate. 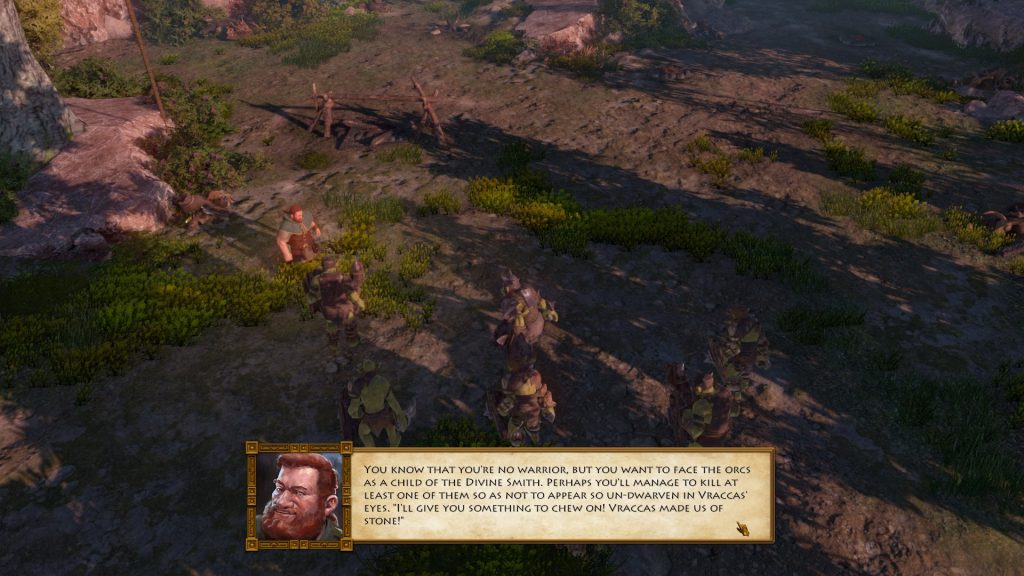 The whole game has a sort of dollar-store fantasy novel charm, which hooked me until the very end – even despite several bugs and setbacks. Plus, it often can be found on a deep sale.

If you’re the type of person looking for an epic forty-hour RPG experience, you might want to look elsewhere. But, if you play games for the journey and are inclined to spend a dozen hours in a groundling-filled physics sandbox, then heft that hammer and get tongs-deep into The Dwarves.