Tighten up your bolts and hold onto your top-hats: today’s Backlog Quest focuses in on Vaporum: the journey of an amnesiac pest-control professional. Prefer to watch? Check out the video breakdown at the link above, or visit 2 Headed Hero on YouTube!

Vaporum is another entry into the growing revival of new indie grid-based dungeon crawlers. This genre has deep roots, reaching all the way back to the graph paper beginnings of RPGs themselves, and many old grognards still carry fond memories of titles such as Eye of the Beholder. One of my all-time favorites, Lands of Lore: The Throne of Chaos, remains enjoyable even to this day. 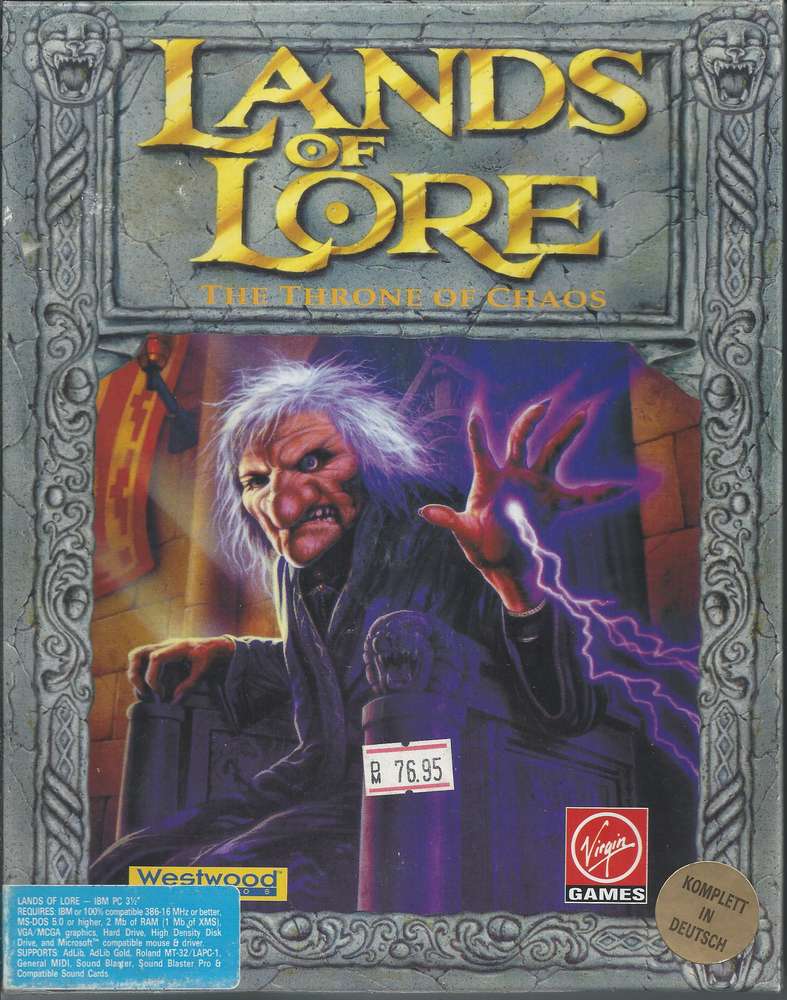 The humble beginnings of the grid-based dungeon crawler now see new life due to an explosion of indie titles.

The genre went back underground following the onslaught of first-person shooters, seeing few releases of note for several years. That is, until the 2012 indie title Legend of Grimrock reignited interest in this particular style of gameplay. Grimrock opened the floodgates for dozens of similar grid-based CRPGs in the indie gamespace.

Vaporum is a 2017 entry into the rediscovered realm of dungeon crawlers from small Slovakian developer Fatbot Games. Over the last couple years, the game has undergone many improvements, and has now found a new life on consoles. This week brought us console releases on Xbox One, Playstation 4, and the Nintendo Switch. So – how is it? Let’s lace up those corsets and dig right in. 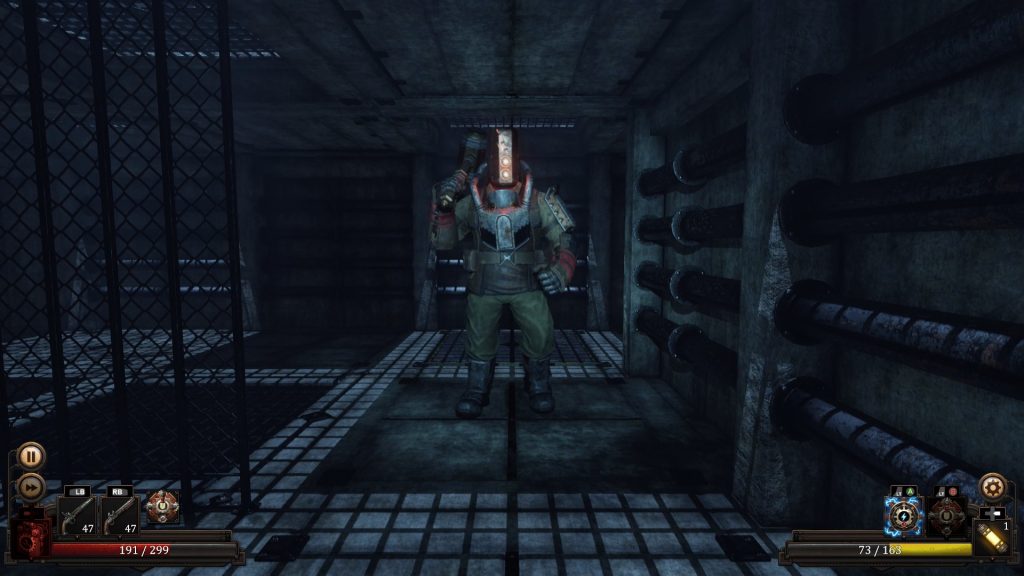 Rather than controlling a party of adventurers, Vaporum players are stuffed into the clanky brass boots of a single survivor. After waking up on a particularly cozy patch of wet rocks, our intrepid roach-wrecker realizes he has a clear choice to make: either step inside the doors of this unwashed mechanical nightmare, or await a murky death at the bottom of the sea.

Our mouse-mashing hero proceeds to double duty as the titanic tower’s handyman- rearranging cargo, fixing engines, and eradicating various other OSHA hazards throughout his journey. At every turn, he battles a variety of horrific delusions: overgrown cockroaches, bloodthirsty spider-toasters, and even the odd psychotic lamp. Truly, Vaporum aims to place the player face to face with the terrifying repercussions of a massive memory-loss-causing head wound. 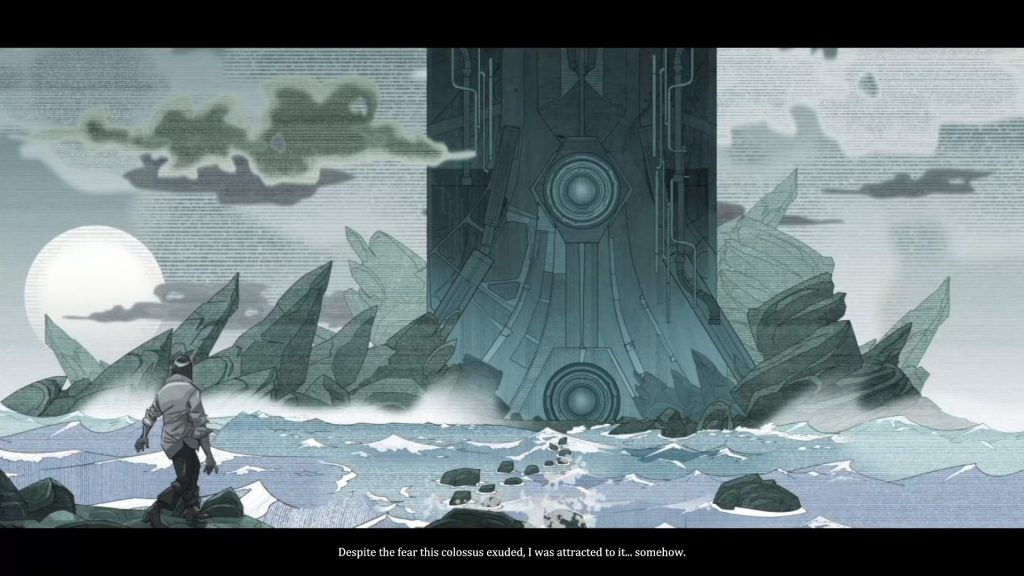 During the game’s tutorial, you strap yourself into one of four different work rigs, roll up your cummerbund, and get to work. Combat generally plays out in real-time, with actions, movements and attacks having both a wind up and a cooldown, but the action can be paused at the tap of a button when encounters get hot.

Stick It To Em

The addition of native controller support is an excellent one. Since Vaporum lands squarely in a genre long dominated by keyboard and mouse controls, I was blown away by how well this works. Left Trigger is mapped as a sort of modifier key for major functions, and Right Trigger brings up a free cursor to help suss out secret buttons and levers. Inventory management is also fairly minimal. Grid movement on a joystick can feel a little strange at first, but once accustomed to it, you’ll be flying down Vaporum’s rusty hallways and sidestepping its angry denizens with ease. 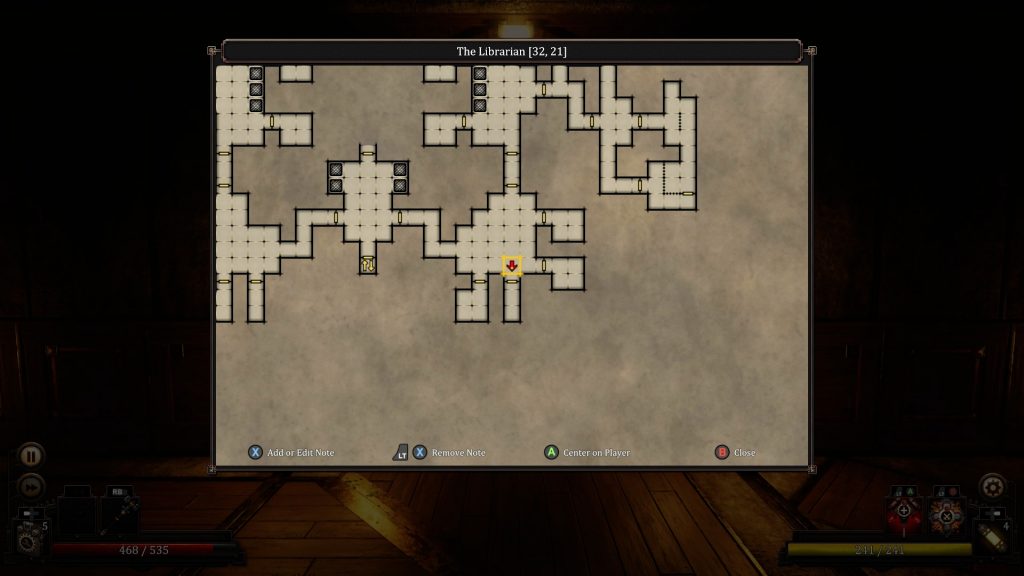 Navigation isn’t all sunshine and rainbows. Vaporum completely lacks a compass, and the automap feels pretty bare-bones. Even the creaky old dungeon crawlers it emulates had better versions of these features. As it is, players might find themselves referring to the map pretty often, which can break up the action.

Down to the Nuts and Bolts

Visually, Vaporum approaches style over realism. I mean, we are talking about a fantasy steampunk horror setting, here. There’s a good amount of detail in the environments. Various valves and other greebles line the walls and help bring the setting to life. The odd stray toolbox, forgotten book, or discarded trinket gives the game a lived-in look. There’s a few lackluster textures here and there, but the style is quite cohesive – even if it can be a bit dark. 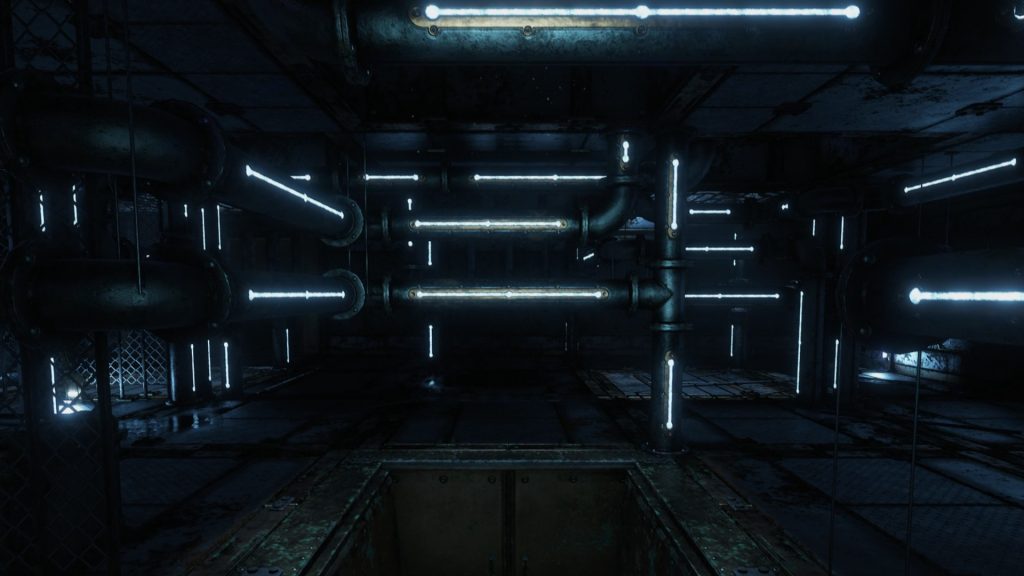 Enemy models have some unique designs that fit the theme, sporting brass cogs and smoking furnaces galore. There’s occasional stiff animations when an enemy is moving, likely exacerbated by Vaporum’s grid-based movement system. It would have been nice to have some sort of swinging animation for the weapons rather than just the white streak that flashes across the screen, but this is a pretty common approach to weapon animations in crawlers of this caliber – and overall a small nitpick. 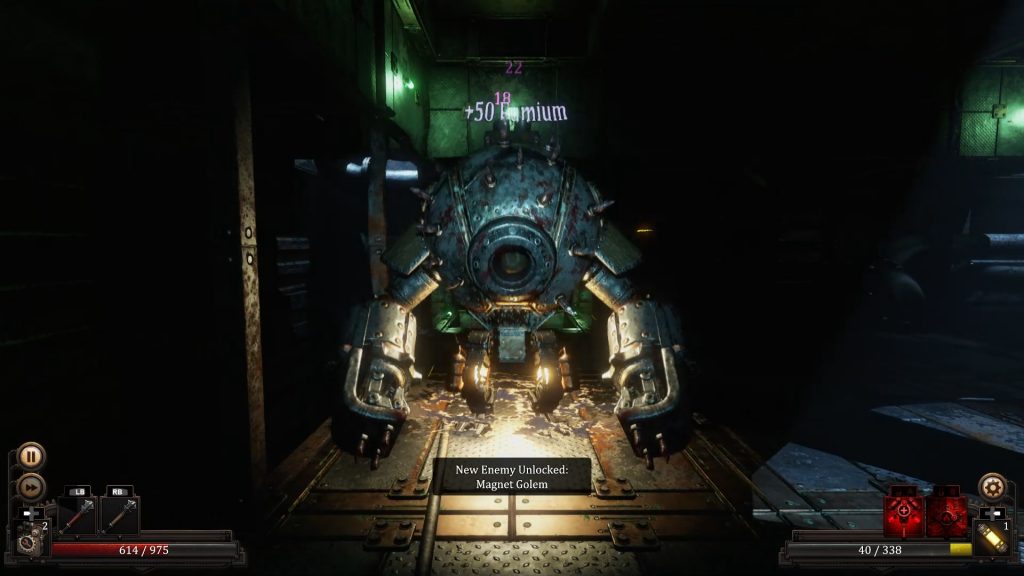 On the sound side, Vaporum has fairly adequate effects. There’s a satisfying clang when club meets automaton, or when your rig gadgets send forth waves of lightning. Music is nearly nonexistent, save for some industrial noise track during boss fights and a very catchy main menu song. This subtle approach definitely lends itself to the horror overtones, but I still would have liked a little more mood music.

The game also contains a fairly large amount of voicework throughout its short length. Most of these reside in the internal dialog of the player character, and audio logs that litter the environments (as seen in Bioshock or System Shock). The voiceover work serves to add a step of polish and immersion, and helps Vaporum rise above the normal expectation of a small-team indie game.

First and foremost: this game will wreck you. Even on Normal difficulty, players are going to be tested. Each enemy encounter can easily bring your hapless handyman to his knees, or drain your scarce resources. On the bright side, there’s numerous difficulty settings, including a casual mode that makes combat completely trivial and allows Vaporum to be completed as a puzzle game. 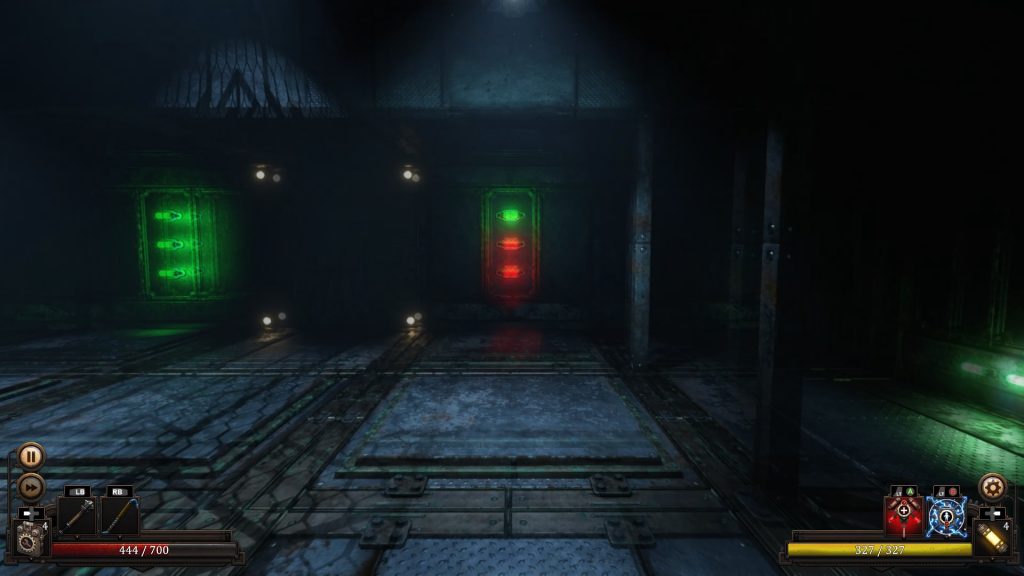 Several of Vaporum‘s devious riddles stand between you and the top of the spire. While most of these are well-constructed and enjoyable, several involve some tedious crate-pushing. For me, the box shoving puzzles were the most frustrating, and brought the game’s pace to a crawl.

On the bright side, many of the levels also contain secrets (and some contain secrets within secrets), which is naturally where all the best stuff can be found. The completionist in me felt compelled to poke and prod at the game’s dark corners in search of hidden switches and concealed treasures – well worth it considering the risk that combat presents. 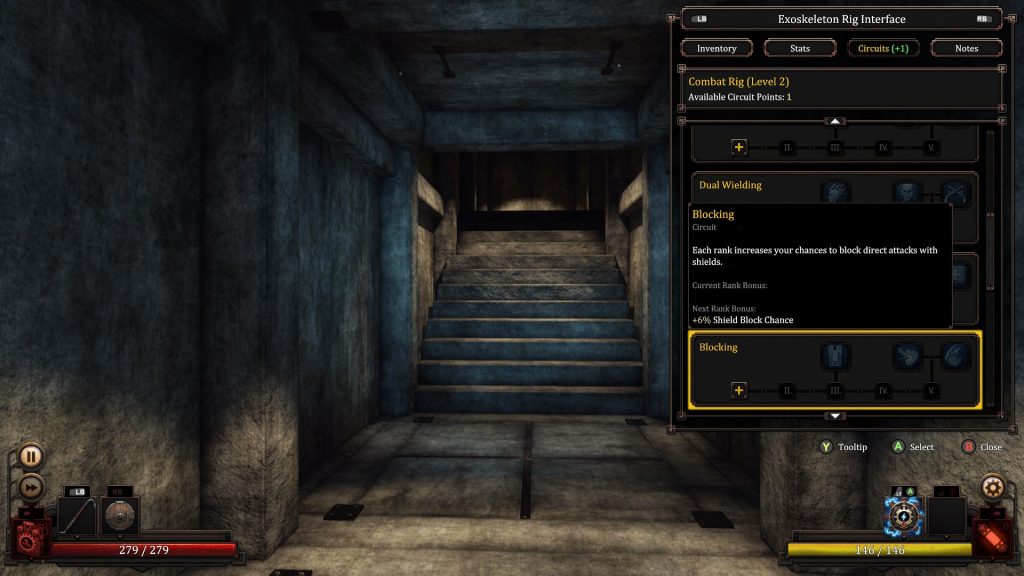 Vaporum has a heaping amount of skill trees to focus on, and the early choices are the most important ones. You’ll need to zero in on one or two trees at most, and at least one of those should involve survivability. I loved how the skill bonuses gave out some nice meaty numbers, making it feel like an accomplishment upon level up. Unfortunately, Vaporum keeps with true old-school design and offers no respec option, so be warned: you’ll be forced to live with your choices.

Once I gained enough experience – uh, “Fumium” to flesh out my rig build, the combat became pretty enjoyable. I went with a dual-wield build, and two-fisting flintlocks or pummeling the various bots and abominations with clubs and crowbars was pretty satisfying. The enemies tend toward damage sponginess, but encounters are normally small. Therefore, you’ll have to learn to sidestep your way around combatants to defeat them with a sound combination of positioning, attacks, and ability use. 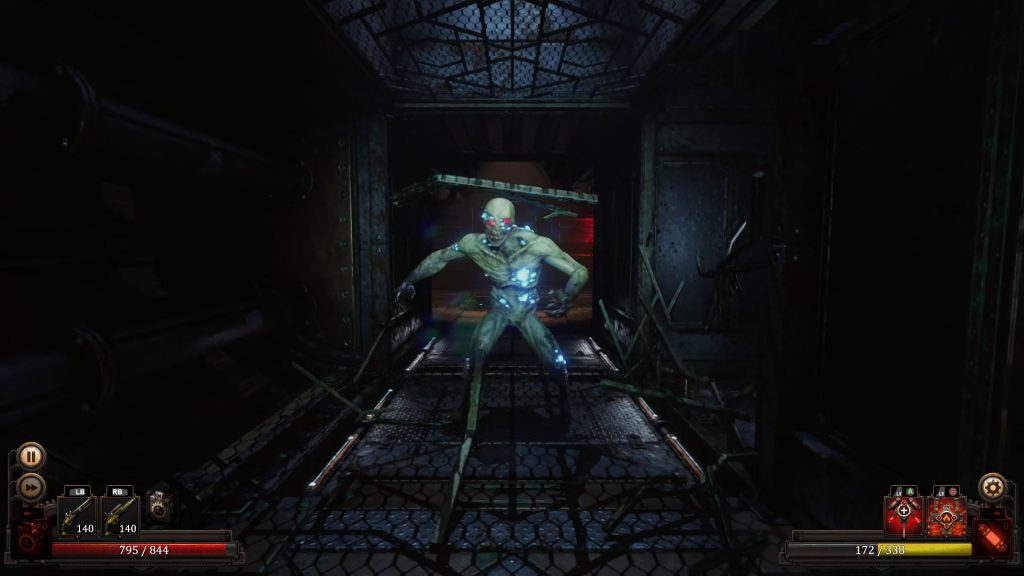 Much of Vaporum’s challenge lies in the lack of healing skills. Repair kits are hidden in the levels or dropped by enemies, but are precious few. Abilities can be attained in the mid-game to drain life from foes, but the risk of combat must be weighed carefully. Unlike many old-school crawlers, there’s no rest feature or healing spells. By leaning on puzzles and exploration and making battles risky, Vaporum has much more in common with survivor-horror game mechanics than it does with the dungeon hacks of old.

While it’s easy to dismiss 2017’s Vaporum as another “me-too” entry, Fatbot Games has taken heavy strides to differentiate their dungeon diver from the growing pack. Vaporum leans towards a Lovecraftian survival-horror approach, and coats it in a grimy steampunk veneer. For those looking to face down armed automatons and brutal behemoths within a labyrinth of perplexing puzzles, this is a solid choice. And for those that are looking for a challenge, they will certainly find it here.