Today’s BACKLOG.TXT deals with a teaser: the highly original adventure/stealth hybrid Backbone: Prologue. On 2 Headed Hero, we tend to keep an eye out for indies that might otherwise slip by. Fortunately we’ve dumpster-dived through enough of the garbage to sniff out a quality clue.  Prefer to watch? Click the video above or visit us on 2 Headed Hero’s YouTube channel!

Backbone was successfully Kickstarted by Canadian developer Eggnut in 2017, and the full game is aiming for a multi platform release in 2020. While Backbone: Prologue is only about the first forty-five minutes of the full upcoming game, this noir trash-panda detective tale is shaping up to be a clever delight. 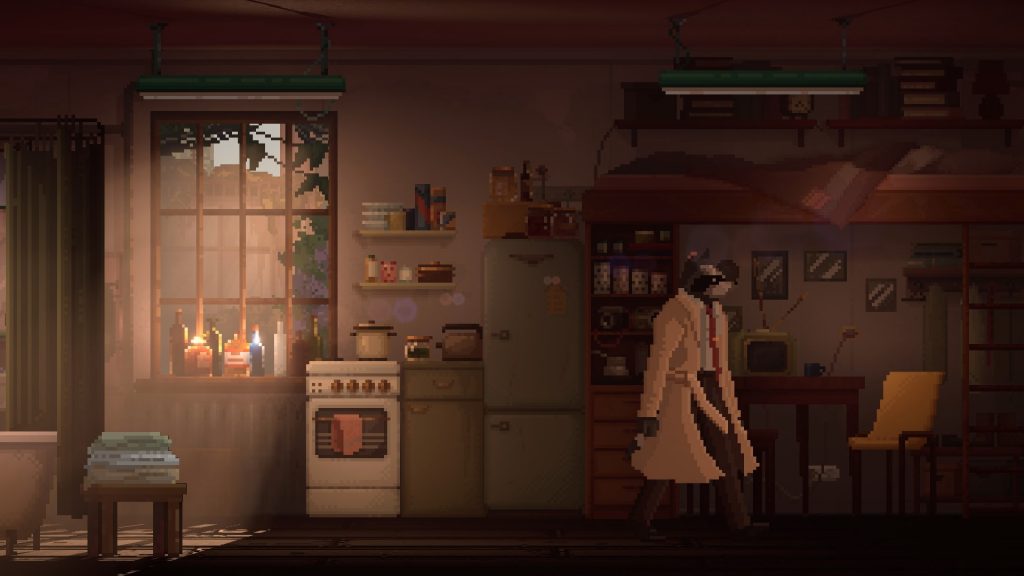 Players step into the shoes of anthropomorphic private investigator Howard Lotor and stumble across a dark and sinister mystery in a re-imagined Vancouver. The world is now populated by a flurry of fursonas, without a single normal human in sight, but the gritty tone Backbone Prologue sets is definitely not kiddie fare.

Backbone: Prologue uses a modern pixel art style – no black outlines here – and the visuals are smartly enhanced by  Unreal Engine lighting effects. The sprites in each scene are set up as flat set pieces and objects in a 3D space with a fixed-distance camera. This allows for the sort of subtle lighting and dynamic shadows that can really help players buy into these environments while still maintaining the pixel-platformer format. 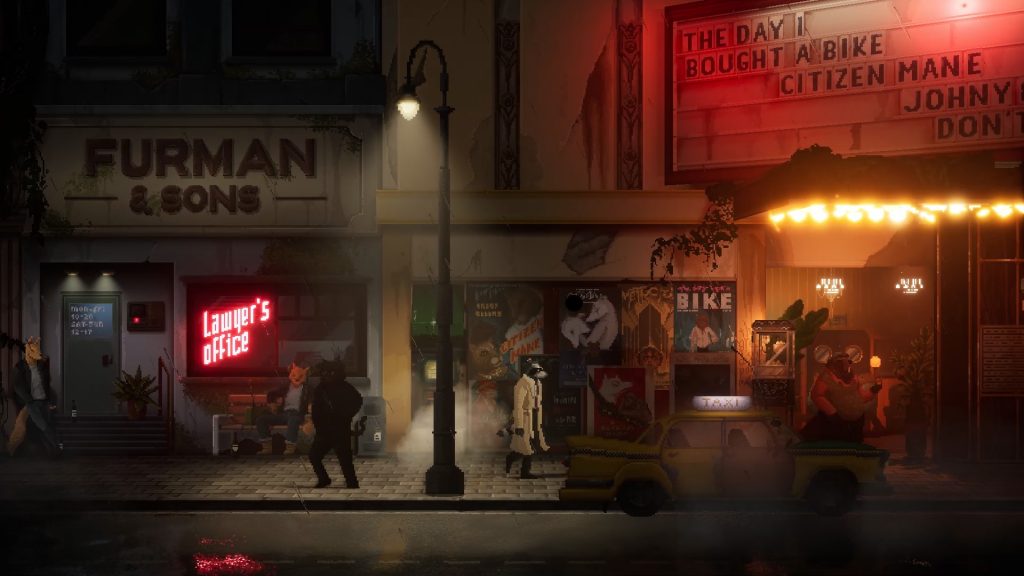 These techniques, along with an impressive number of animated background actors, further bring the setting to life. The result is a gritty, bustling pixel-noir – an interesting juxtaposition between the childish and the very-much-not-so. 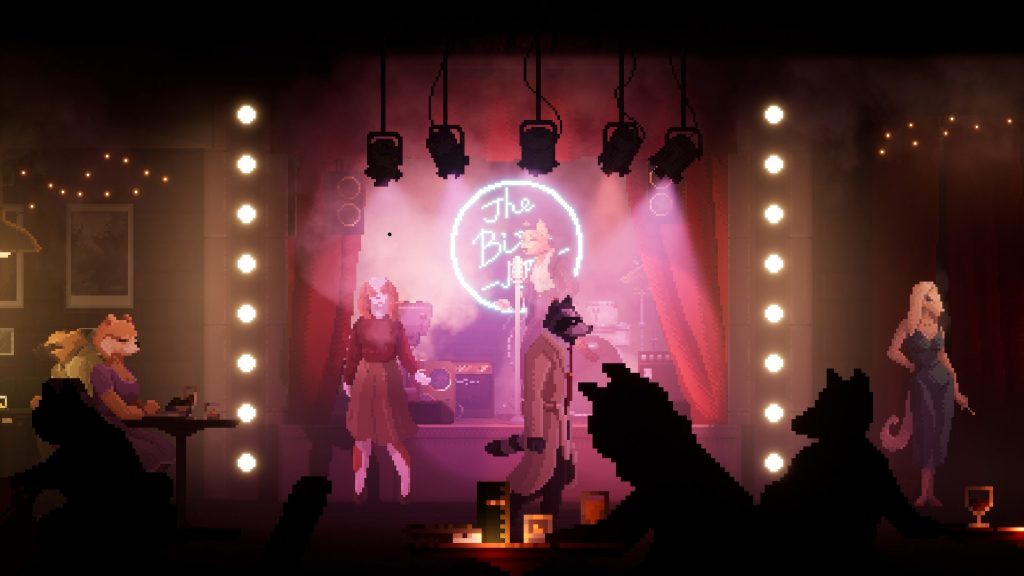 The jazz soundtrack is phenomenal, even containing lyrics.

Sounds in Backbone: Prologue ooze with atmosphere. The moody jazz soundtrack compliments the bustle of the city and the pitter-patter of gently falling rain. The wet slaps of your garbage-loving gumshoe’s feet hitting the pavement are balanced just right in the audio mix. Once inside the interior of the nightclub, Backbone: Prologue’s musical numbers shine through, even including a gorgeous jazz tune complete with lyrics. 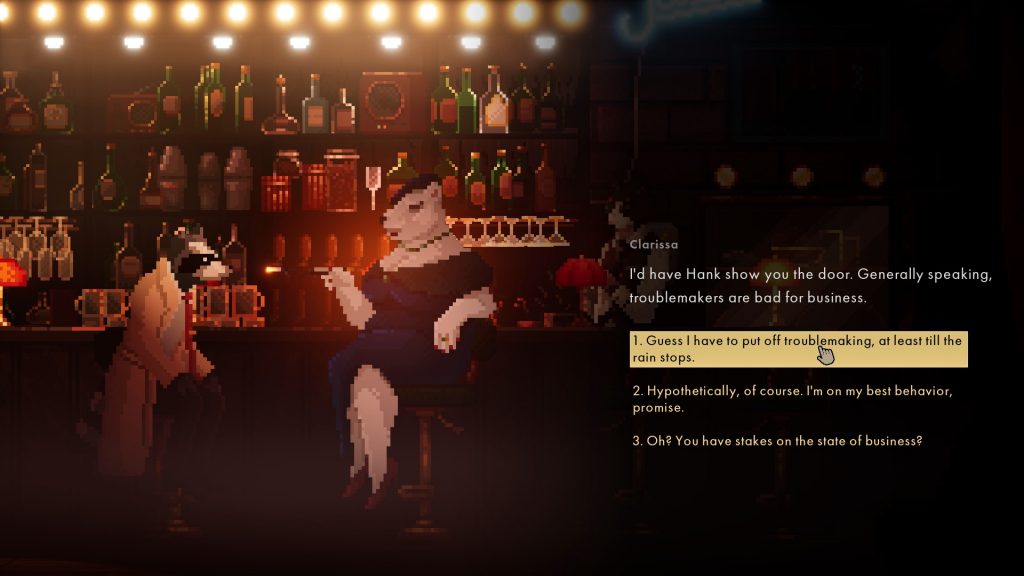 While there’s no voiceovers – yet – the team met their Kickstarter stretch goal to include full voicework. Voiceovers can often make or break a game’s atmosphere, and while the tiny taste in Backbone: Prologue stands on its own, I still eagerly look forward to hearing how actors approach the dialog here.

Dialogue trees provide options for handling your clients and the city’s denizens, though it’s unclear how much your choices actually matter. Presumably, you can’t back yourself into an unwinnable situation no matter how hard-boiled a private dick you choose to be. Since brute force dialog puzzles are often an annoyance in adventure games that bring pacing to a halt, it’s nice to see Backbone: Prologue’s gentler approach. 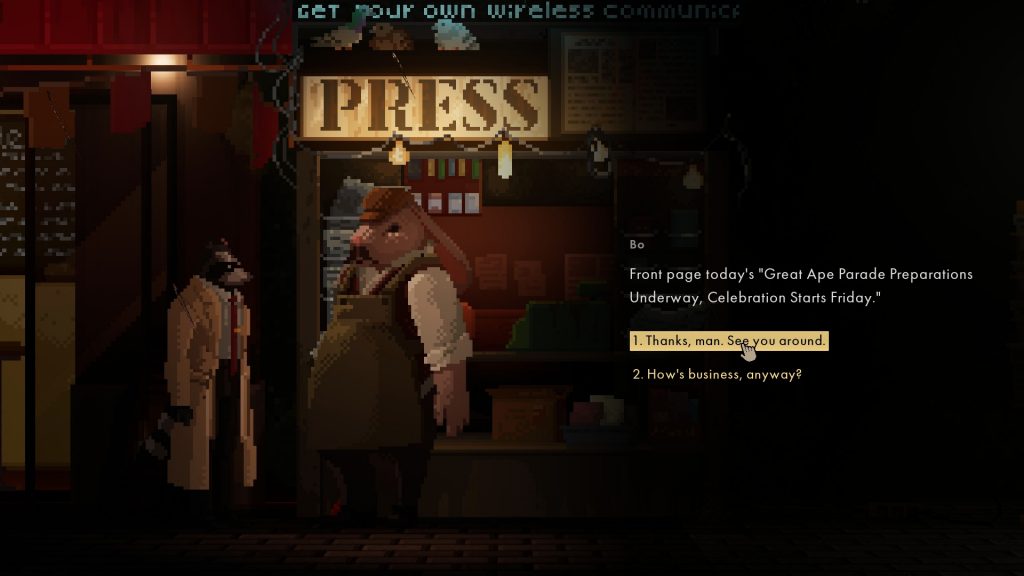 Backbone: Prologue’s stealth sections were puzzle-like and precise, but not entirely devoid of necessary wiggle-room. Distraction items in the environment help Howard get in where he’s not wanted, and failing these merely boots you back to the start of the sequence. Overall, they broke up our session nicely. 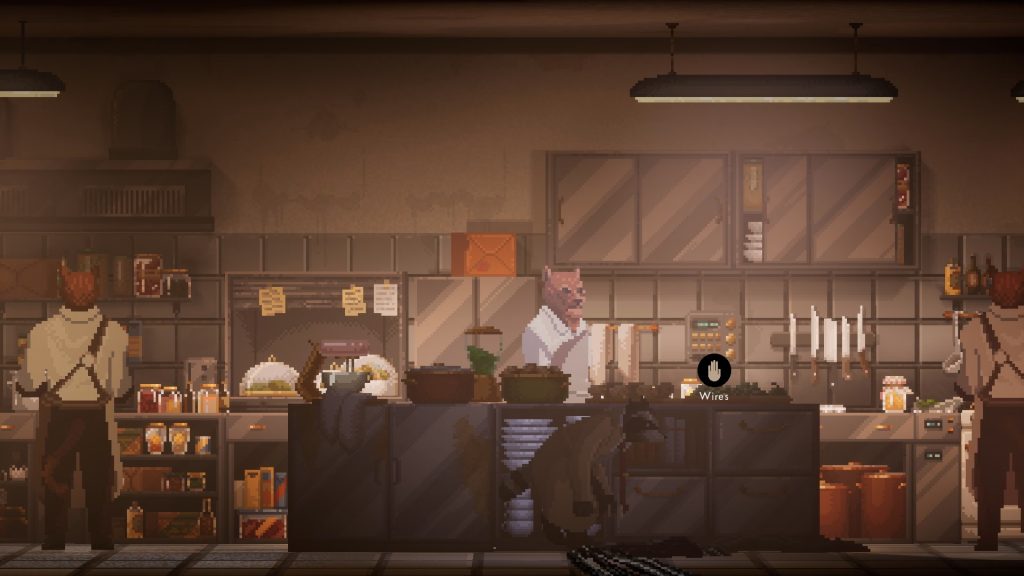 The single non-dialogue puzzle in the demo was a satisfying combination of physical arrangement and logic. While I won’t spoil the solution here, the answer is a clever nod to fans of immersive sims and brought a smile to my face. 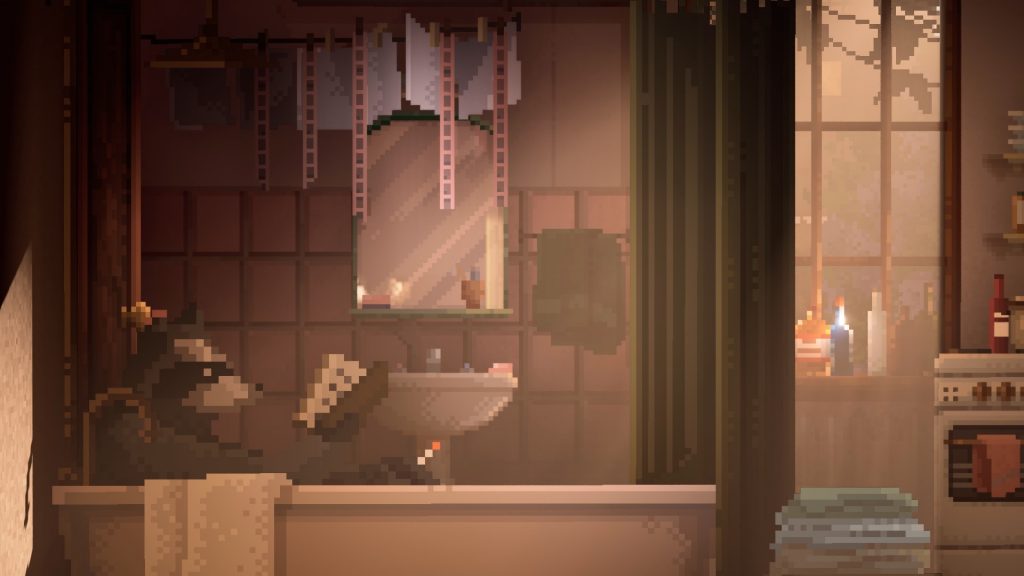 Overall, Backbone: Prologue is a game to watch – the novel combination of stealth and adventure combined with the imaginative setting is shaping up to win over adventure fans when the game releases next year.