Oh, Deadpool fans. You have my sympathy. Please, if you want to remain happy and healthy, please do not hit the jump. Just know that, uh…Ryan Reynolds’ Deadpool does get scarred — kind of — in X-Men Origins: Wolverine, and you’d best leave it at that. For the rest of you, one of Hasbro’s Wolverine movie toys has been slighted, giving us a glimpse of, uh…Deadpool’s “alternate” form. Hit the jump to see it. 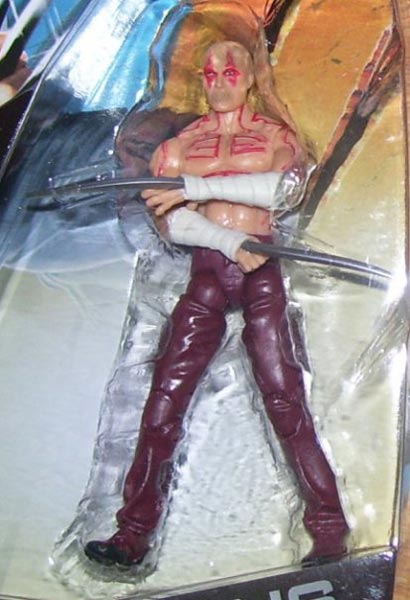 Oh sweet Evil Flying Jesus.
What the fuck is this? What the fuck is this supposed to be? Why is he scarred like Anakin from that one episode of Clone Wars? And what in god’s name is coming out of his arms?
I am baffled, folks. Now, I’m not really surprised that they didn’t give Ryan Reynolds the full Two-Face treatment. I was expecting something that allowed Reynolds to still show off his face, although I did not expect a plethora of tribal tattoos (I suppose we should be glad it’s not ?barbed wire or celtic knots). I could probably deal with those…if HE DIDN’T HAVE TWO RIDICULOUS SPIKES COMING OUT OF HIS FOREARMS. Jesus, people. The film already has Wolverine in it. Wolverine has THREE claws…ON EACH HAND. Why on Earth would you transform one character, a fan favorite at that, into a shittier version of the film’s star?
Sayonara, potential Deadpool movie. You were brutally murdered before you ever had a chance to be born. (Via Action-Figure)
Tweet Pin It