Menu
Home
>
Cartoons
>
Dennis Quaid in G.I. Joe Movie; I’m Not Sure If He’s Slumming Or Not 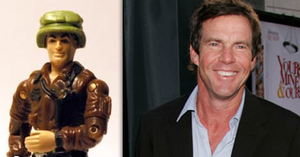 Right? I mean, Dennis Quaid has been all over the map, movie-wise; he’s been reasonably well liked in some movies, like In Good Company and Frequency, and then he’s been in some total shit. At any rate, he’s going to be playing General Hawk, the bland guy who who created to be in charge of G.I. Joe when they figured Duke wasn’t leader material enough. That kind of irked me as a kid. Duke was clearly leading the Joe team, but was always right there fighting alongside his men (shooting lasers right over the heads of Cobra forces) and all of a sudden, this Hawk asshole shows up as the leader of G.I. Joe. Goddamn bureaucrats. They know nothing of what it’s really like to fight!

Speaking of Duke, he’ll be played by Channing Tatum, who actually playeda guy named Duke in the Amanda Bynes’ vehicle She’s the Man, as well as Rowdy Sparks in Supercross. Uh-huh. And last but not least, the evil master of disguise Zartan will be played by Arnold Vosloo, best known as the mummy from The Mummy. Seriously, if these people hadn’t cast Ray Park as Snake Eyes, I’d think they were just trying to fuck with us. (Via IESB.net)