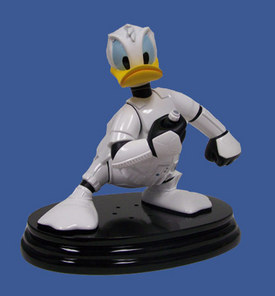 Small children visiting Disneyland this June will be bemused and frightened by the sweaty, costumed horde of Star Wars fans which will invade the Magic Kingdom in an act of public group nerdy not matched since…well, last year. It’s been announced that SW Celebration, the annual Star Wars con, will be held June 26-29 at Disney’s Hollywood Studios. The bad news is that the con is taking place one month after the original Star Wars film’s 30th anniversary (May 25); the good news is that there are rumors that the con will host the some of the Star Wars TV show goodies, like the cast of the live-action show set in-between Revenge of the Sith and A New Hope, or some footage from the CG Clone Wars cartoon.

Incidentally, I was extremely bothered by the fact that Donald Duck was in a stormtrooper outfit holding a lightsaber, which breaks all kind of continuity for me. Then my boss pointed out it’s a comlink, and I relaxed. The duck in the stormtrooper outfit didn’t concern me at all, obviously. I think I have a problem.