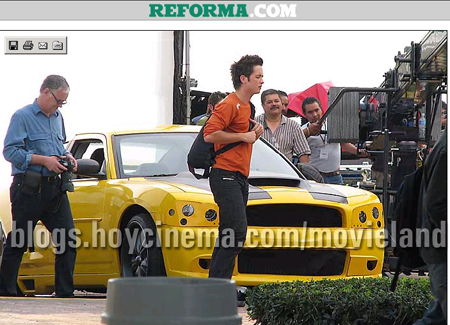 The live-action Dragon Ball movie is well on the path to infuriate everyone who’s a fan of the anime, and please no one who’s not. The HoyCinema blog has a few pics from the Mexico shoot with Justin Chatwin as Goku, and apparently the filmmakers have traded the mid-air, energy-blasting martial arts of the anime for mild vehicular assault, as Goku appears to be getting bumped by a yellow mustang.

In the beloved anime and manga, Goku usually saved the world from transforming, martial artist aliens with fights lasting hours of footage; he rarely had difficulties looking both ways before crossing the street. Given this discrepancy, it seems that the Dragon Ball movie is on track to be a debacle of the original Street Fighter movie proportions. Here’s hoping that unlike Street Fighter’s Raul Julia, Chow Yun-Fat (who plays lecher-sensei Master Roshi in the flick) won’t die of shame immediately after filming. (Via Kotaku) ? Rob