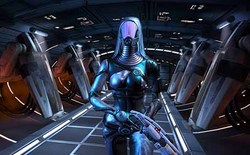 A little while ago, Fox News held a scathing discussion of Mass Effect, condemning the Xbox 360 RPG for containing full frontal nudity and hardcore sexual content. The fact that the game contained neither of these things did not seem to worry them. Here’s a simple timeline of what happened next:

1) Gamers freaked out
2) EA, the publisher of Mass Effect, demanded a correction
3) Fox News invited EA on to argue their point about the game
4) EA refused, saying there was no “point” other than Fox News had made shit up about their game

And now, since Fox News seems to be unconcerned with their lack of releasing facts, the closest anyone will get to an apology or correction is this; self-help author Cooper Lawrence, one of the folks who trashed Mass Effect on Fox, was interviewed by the New York Times and apologized, saying she’d now seen the “sex scene” in question and that it was “kind of a joke.” So what have we learned?

1) Fox News is not at all worried about reporting lies
2) The New York Times is Fox News’ effective correction box
3) If you lie about a video game, gamers will use Amazon Reader Reviews to fuck your book up