Menu
Home
>
Nerdery
>
Our Father, Who Art a Sith, Hallowed Be His Lightsaber 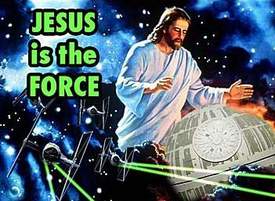 Whenever you hear about someone taking Star Wars waaaaay too seriously?at least in some kind of weird religious context?it’s always in the U.K. I blame Anglicism; it’s so clearly a made-up version of Christianity the Brits feel anything can be a religion. From TheCheers.org:

Two British brothers are planning to set up a ?Star Wars’ themed church in Wales

Barney and Daniel Jones are huge fans of the sci-fi films and want fellow devotees to be able to join them at the UK Church of the Jedi in the village of Anglesey.
Services will include sermons on The Force, light sabre training, and meditation techniques.
Barney said: “As children we always watched the Star Wars films anyway. We noticed that there were a couple of sites on the internet, Jedi church sites. We printed off a couple of sermons and did a sermon in our house for a couple of friends one night.
“My brother and I will wear the Jedi robes, the dark brown robes… the congregation would be in black. Really to bring a sense of unity to the meetings.”

All members of the church will also be taking a vow of chastity, whether they know it or not. (Via Yodanews)