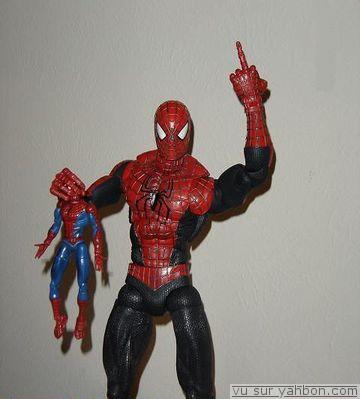 The long-rumored Spider-man story “One More Day” hit newsstands last week, confirming that there is no shitty idea that Marvel Comics won’t apply to their most beloved character. Here’s the set-up: in “Civil War,” Peter Parker revealed he was Spider-man, then Auny May got shot by a bullet meant for Spidey. In “One More Day,” Spider-man did the only thing that made sense?he made a deal with the devil to save Aunt May’s life in exchange for his marriage.

Spider-man is not divorced, mind you?his marriage to Mary Jane now never existed, and he’s a swinging, web-slinging single. Now, comic nerds are upset about 20 years of Spider-man comics being retconned into god-knows-what (he was married in 1987?see the confusion here), but there are other problems with the storyline…

? Spider-man is clearly the dumbest person who ever lived. What kind of superhero makes a deal with the devil? Peter Parker is supposed to be smart; did he not suspect that perhaps dealing with Satan doesn’t turn out so great, maybe just once in a while?
? Spider-man is also the dumbest person ever for trading his marriage to a supermodel so that his elderly aunt could live. Aunt May’s like what, a million and two years old? How much longer does she have anyways? Who would trade an extra two years for 40+ years of marriage to a smoking hot redhead? What kind of a trade is that?

? I’m not much of an American comics fan, but even I know adding the devil to Spider-man breaks the incredibly fragile reality of a man who got powers from being bitten by a radioactive spider instead of dying from leukemia.
? But the biggest problem might be that “One More Day” has been rumored to have kicking around Marvel for five years now, and this is the best idea all the Marvel guys came up with in all that time? Spidey meets the devil? I agree that Spider-man gained a good deal of his popularity by being a nerdy, lonely teen?it made him incredibly identifiable for all his nerdy, lonely readers. So the marriage to Mary Jane was a bad idea back in ’87. But seriously? That’s your solution? The devil?

Whatever, because it’s done. Spider-man is alone except for his perfectly healthy ancient aunt. I hope Aunt May’s wheatcakes are pretty goddamn good, Spidey, so you can eat them during the times you would’ve have been having sex with your supermodel wife. Jackass. ? Rob