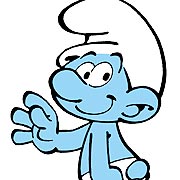 With their agrarian, conflict-free society, Smurfs represent everything that is good and positive in the world. But, perhaps because they were created by a Frenchman, they have their dark side as well. Whether they?re adopting less-than-desirable human tendencies or simply overlooking the ailments in their own society, the Smurfs are no angels, and that dichotomy can make us a little uneasy. But thanks to rigidly defined jobs and highly descriptive names, it?s easy to find the Smurfs that bring out the uneasiness in all of us! To celebrate the Smurfs’ recent 50th anniversary, here are ten that freak us out the most.

Smurfs are vegetarians. So if he?s not tracking animals, what is Tracker Smurf tracking, exactly? Does he hunt escaped Smurf fugitives, like some kind of Smurf Tommy Lee Jones? Or does he stalk teenage Smurf victims, whom he disembowels and hangs upside-down in his barn? Either way, no one can hide from Tracker Smurf; if he can track a falcon on a smurfy day, then he can find you. 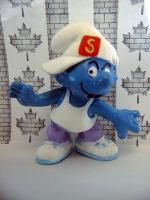 Sometimes it seems like Smurfs only know one song, that grating ?la la la-la-la-la? tune with no words. But Techno Smurf knows hundreds of songs, even if they do all sound alike. Not to be confused with Hip-Hop Smurf or Backstreet Smurf, Techno has been to dancehalls in all the big cities, and realized that the best place to hold a rave is in Smurf Village, where the houses are giant mushrooms. Sadly, Smurf-sized pacifiers are hard to come by and Handy Smurf is still working on glow-stick technology.

To be fair, there is nothing outright unsettling about Hefty Smurf himself?he obviously works out a lot, but it?s probably a bid to gain the attention of Smurfette, or perhaps Jokey Smurf. (Hey, don?t ask, don?t smurf.) However, it must be pointed out that he has hearts tattooed on both arms. Which means that somewhere in Smurf Village, there is a Tattoo Artist Smurf. That, or he got them in prison. 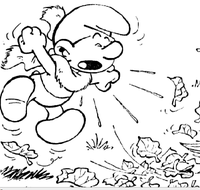 Aside from being ripe for a lawsuit from the Disney Corporation, Sneezy seems to be perpetually sick with the flu, and no amount of Smurf Airborne will help. Is this some kind of superbug, tearing through the Smurf population? Can humans catch it? If it can give a magical blue pixie a 24-hour runny nose, imagine what it can do to us. When Sneezy changes his name to Coughing-Up-Blood Smurf, we recommend quarantine.

Papa Smurf always ruled the Smurfs simply because he was the oldest and wisest and he had a red hat. But god forbid he leaves town for a few days, because Smurfs look for any excuse to hold a free and fair election. And once elected, this guy immediately declared himself king, built a wall around Smurf Village and threw Jokey in jail. The rebels were ready to behead him when Papa came back and set everything right, but somewhere out there, King Smurf is living under a different name, waiting for the key moment to rise to power again.

If you thought the Smurfs were freaky, with their shirtless ways and their giant mushroom houses, Wild Smurf is king freak of the forest. He lives in the woods all by himself, wears only leaves and speaks in an unintelligible chatter that animals can understand. Whether he?s a radical Smurf who rejects Smurf society or a mentally ill Smurf that the other Smurfs feel no responsibility for, either way he?s probably having sex with animals. 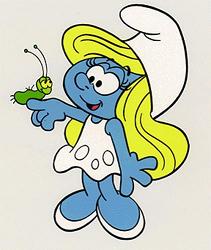 Aside from the inevitable problems that arise with being the only sexually active woman in town (Sassette is practically a toddler, and Nanny is well past the cougar stage), Smurfette also represents a staffing issue. As the lone working female, Smurfette seems to fill all of the traditionally female jobs, including nurse, secretary, ballerina and stewardess. Surely there are male Smurfs that can fill these jobs without being teased by their peers? Vanity Smurf, for instance?

Everybody loves a good joke. But what do you call a Smurf whose biggest pleasure in life seems to be leaving boxes around that are packed full of explosives? Would you call him Jokey? Or would you call him??terrorist??! With his exploding gifts, Jokey is the Unabomber and Al Qaeda in one small blue package. If you see something (like a present with a wick sticking out of it), say something!

Handy Smurf built this robotic Smurf out of wood, and somehow managed to make it capable of feeling emotions and morality. Either it?s a magical being, and therefore an abomination in the eyes of God, or it?s a highly advanced artificial intelligence, like the Terminator, and all of the Smurfs will eventually perish in a nuclear holocaust. If this seems unlikely, consider the fact that in the cartoon he was voiced by the same actor who voiced Megatron, leader of the Decepticons, in the original Transformers. Coincidence? We think not. 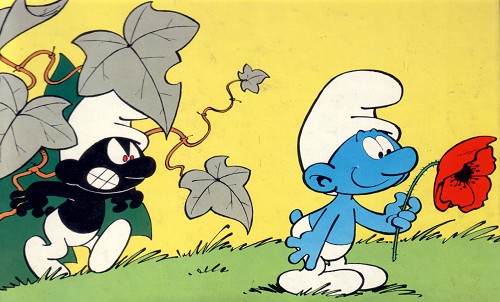 Is there anything more unsettling than somebody you used to know chasing you and trying to eat you alive? Other than blatant racism, not much, right? This is why we?re unsettled by the early ?Smurfs? cartoon episode where a bite from a fly turned Lazy Smurf?s skin purple and sent him on a zombie rampage worthy of 28 Days Later. Speaking gibberish, he would bite other Smurfs on the ass, turning them purple, and so on. Unsettling, right?

Well, prepare to be more unsettled. In the original French Schtroumph comics, their skin didn?t turn purple?they turned black. So just to make sure you?re following along at home, not only did the black smurfs act in a violent manner, they couldn?t speak properly, couldn?t be reasoned with, and they spread their darker skin color through biting other people?s asses. Seems a lot more racist now, doesn?t it? Hell, even the purple smurfs seem kind of racist now. At the very least, we?re certain Al Sharpton disapproves. 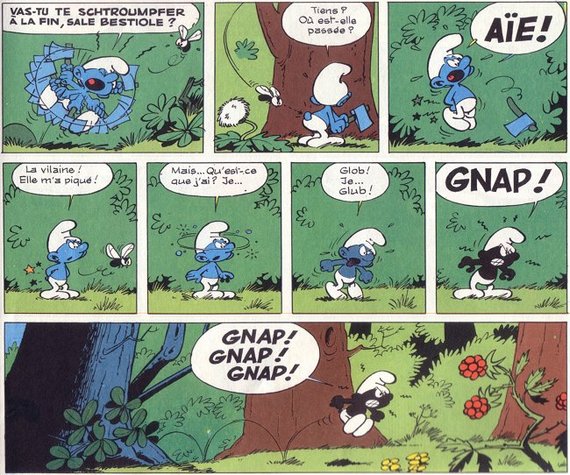