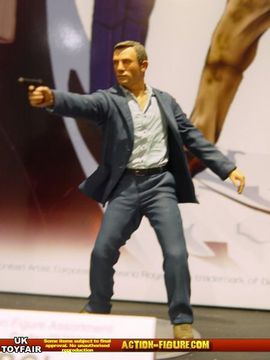 I was hoping to hear some good news out the U.K. Toy Fair, but, like all years, no American toy company reveals shit about its toys because the New York Toy Fair is three week’s later. I don’t know why the U.K. Toy Fair even tries. It’s sad, really. Anyways, I’ve raided the news from the toy sites for everything worse mentioning (mostly through the great Action-Figure.com), which is this:

? Mezco’s Series 2 Heroes will include Horn-Rimmed Glasses Guy, Niki/Jessica, Matt Parkman (with Molly accessory), Malcolm MacDowell as Linderman, and Future Peter. Series 3 will include Nathan Petrelli, Adam Munroe, the Haitian, Hiro in samurai armor, and GODDAMN KRISTIN BELL (as Elle). I now have a reason to pray for this toyline’s continued success. There are no pictures, just mediocre drawings (Wave 2 and Wave 3) of the characters.

? Corgi (the die-cast car maker) is releasing 7-inch James figures, and what I believe are mini-busts. Darned if they don’t have actually have pictures of Bond and LeChiffre from Casino Royale, and they look pretty good! There will also be figures from (sigh) Quantum of Solace (raising the question of who the fuck will be buying a Judi Dench action figure?), and more importantly, the classic Bond films. Wave 1 will include Oddjob, Scaramanga, Vesper Lynd and Honey Ryder; Wave 2 will have Jaws, Baron Samedi, Pussy Galore and Solitaire. There’s also a drawing of a Christopher Lee figure from Man with the Golden Gun, which would make me wet myself with joy. Check ’em drawings of ’em here.

? Corgi is also releasing rather awesome Nintendo characters in the U.K., along with a play-sword out of The Legend of Zelda. I feel almost positive Corgi is importing these, but if they’re actually making ’em, well done!

? Hot Toys is releasing Chubbies, which are very short, fat Star Wars toys. They look like Weebles, or possibly Mr. Potato Head without any potato-y goodness. 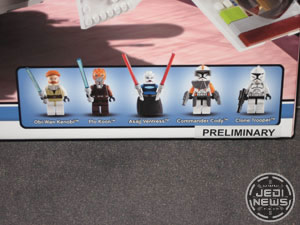 ? Hasbro’s actually refusing to let members of the press see any of its Star Wars toys, apparently because a lot of it is based on the upcoming Star Wars: Clone Wars cartoon due out in late 2008. But someone snapped some Clone Wars Legos, and they look fun, although not fun enough to mend our broken hearts when the cartoon comes out and isn’t a 1/4 as good as Genndy Tartakovsky’s recent Clone Wars cartoon.