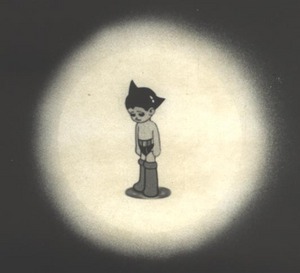 ANN reported over the weekend the the long-in-development, Warner Bros.-produced, fully-CG Astro Boy movie has tanked another director (this time it’s Pixar animator Colin Brady, who replaced the awesome Clone Wars cartoon director Genndy Tartakovsky) for some dude named David Bowers, who did some storyboards for Chicken Run and the last Wallace & Gromit movie and directed Flushed Away, which I have absolutely no recollection of existing.

I find it fascinating what a steep decline of talent this has been. By the time this Astro Boy atrocity actually makes it to theaters they’ll have gone through ten more directors and ended up with some hobo they found sleeping on the corner of the Warner Bros. lot. Still, better a hobo than Michael Bay.