So John Wiley and Sons, the publisher of the widely used Cliff Notes literature guide, have just released manga versions of four of Shakespeare’s greatest plays, hoping to help a new generation of short-attention-spanned school children shirk and slog their way through high school without trying. The versions, of course, are not only adapted to suit the target synapses of most Cliff Notes users, but drawn by people who are not Japanese, as real manga artists are expensive. Shall we take a look at the covers? 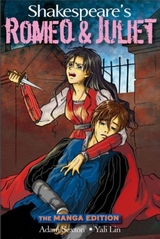 Romeo & Juliet doesn’t look too bad, although I’m not sure that Juliet isn’t a dude (maybe the artist was accurately depicting the Elizabethan practice of using only male actors). Anyways, doesn’t the cover kind of ruin the ending? Maybe a spoiler warning sticker is needed. 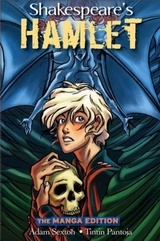 I do not recall Hamlet fighting, loving, or kissing any girl with huge bat wings, but it’s been a while since I’ve read it, so I’m letting that go. But why is he holding the skull so close to his neck? Is he playing Oddball or something, and worried that a group of Halo Spartans are going to gun him down and take the skull? Would I pay to see that? Yes. Yes I would.

I’ve studied MacBeth a few times in college, and yet it never dawned on me to interpret that MacBeth is fucking the witches, as his smug look on this cover clearly implies (at least the two hot ones, but maybe the old witch too). You go for it, dude?and don’t worry, because Lady MacBeth has it coming.