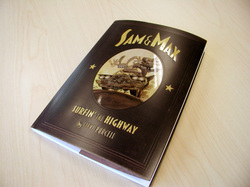 So their PC point-n’-click game might come to the Wii, their awesome cartoon is hitting DVD in March, someone just snagged the rights to make collectibles for ’em, and now this: The original collection of Steve Purcell’s Sam & Max comics (much like the cartoon, except more violent and waaaay more disturbing) is, after being out of print for years, getting re-released by Telltale, makers of the S&M game.

Not only will the collection, called Surfin’ the Highway, be available on February 25th for about $20, you can also order a deluxe edition signed by Purcell himself for a mere $50! (Pre-order ’em here, and check out the other S&M merch). Does this mean I regret paying $50 for my bare-bones, somewhat tattered original copy of Surfin’ the Highway, which I found buried in an L.A. comic shop last year, when I had no idea it was going to be reprinted? Yes! Very much so!