Menu
Home
>
TV
>
Fan Fiction Friday: Turk and The Todd of Scrubs in “Our Sexy Story” 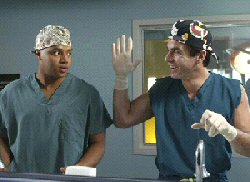 This week’s installment of TV’s Scrubs, that wacky show of hospital hijinks and the once lovable Zach Braff. Author whappystick has chosen to focus of J.D.’s pal Turk and his sex-hungry fellow surgeon The Todd in this short story, which I will only report brief snippits of, lest I shatter your sanity. If you want the full thing, go here, and may God have mercy on your soul.

I didn’t watch all of Season 2, so this is news to me!

Then, without any warning, The Todd pulled away. Turk groaned at the loss of the lips that gave him so much pleasure and tried to get back into that mouth by leaning forward. But The Todd was sitting on top of him: far away and restraining his movement.

Oh, The Todd! Will you never cease your sexual misconduct?

Somehow, amidst all the pleasure he was receiving, Turk?s mind was working well enough to know that if The Todd was at his stomach, the real fun was just a few inches lower, and he grew more excited, and his cock grew harder.

I promise you don’t want to know what’s happening here.

The Todd?s cock was not horribly huge, but it wasn?t small. It was just over seven inches and fairly thick around. It would soon prove to be quite the mouthful for Turk though.

See? Told you. Suffice to say, Turk and The Todd spend the next 2,300 words enjoying each other immensely. After satisfying their sodomy-fueled passions, Turk invites The Todd back to his apartment for Round 2…

But as [Turk] walked by JD?s room, he heard a familiar voice moaning JD?s name. He moved closer to the door to hear it better and he realized who it was. He opened the door and found exactly what he was expecting. JD was bent over the bed with Dr. Perry Cox behind him ramming into him like a bull. TO BE CONTINUED

We can all hope!