Oddly, they’re both the same band: Aerosmith. From the early ’70s through Pump in 1989, Aeromsith made some great songs, rocked as hard as just about anybody, and was generally awesome. Unfortunately, Aerosmith amost never gets its due, since after Pimp, the band during into a bizarre parody of a high-profile rock band, subsisting on one treachkly power ballad after another, which were pretty much the same song, slightly modified, over and over again. So suffice to say, I’m exactly 50% excited about this: 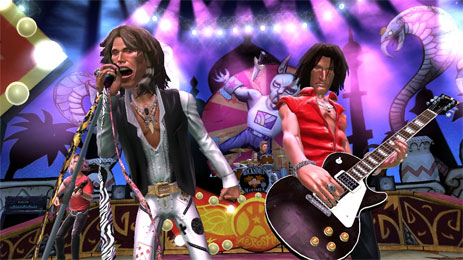 Fire up the fret board, crank the amp to 11 and get ready to rock this way with Activision, Inc.’s (Nasdaq:ATVI) Guitar Hero?: Aerosmith?, the first game built around the legendary music of America’s Greatest Rock ‘N Roll Band: Steven Tyler, Joe Perry, Brad Whitford, Tom Hamilton and Joey Kramer. Slated for release this June, this latest installment from the franchise with the #1 best-selling video game in 2007, puts players in the shoes of Perry (guitar), Whitford (guitar) and Hamilton (bass), as they rock out alongside frontman Tyler and drummer Kramer. Gamers will experience Aerosmith’s GRAMMY? winning career, from their first gig to becoming rock royalty, in a way that no other entertainment vehicle offers.

Dear Activision?please make sure to include “Mama Kin,” “Chip Away at the Stone,” “The Other Side,” and some kind of mini-game where Whitford, Hamilton and Kramer tried to pass the time at the recording studio while Tyler and Perry were out doing all the drugs in Boston. Thanks!