Menu
Home
>
Anime
>
Slayers and Trigun Return; One is News, The Other Isn’t

Weird. Two old anime series (well, hits from the ’90s, at any rate) are both on their way back; Slayers with a new TV series and Trigun with a movie. Admittedly, the Trigun movie was announced two years ago (I remember it well, because Madhouse was furious with Anime Insider for reporting the news, until I told them that the only reason I knew about the movie was because Madhouse head Masao Maruyama announced it to a crowded con room), so it’s not really news. But Slayers? That’s downright crazy, since the last time the anime was produced was like 2001. It’s been nearly a decade. Why make more? Why now? I know a lot of people have fond memories of the fantasy comedy, but would it really be worth picking up in today’s crowded anime marketplace? I imagine some U.S. company will snap it up and be very surprised at the lack of nostalgia-fueled sales. 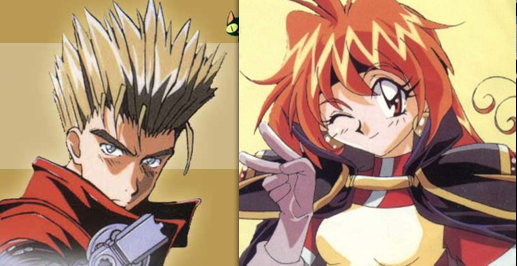 By that token, the details that have finally come out about the Trigun movie are probably news, and Slayers can safely be ignored. The movie is due in 2009, will have an exclusive story from Trigun manga-ka Yasuhiro Nightow, and is being themed “Vash vs. Wolfwood,” according to Japanator. Could this be a calculated attempt to eke money out of one of anime’s most beloved series? Yes, but more power to ’em.