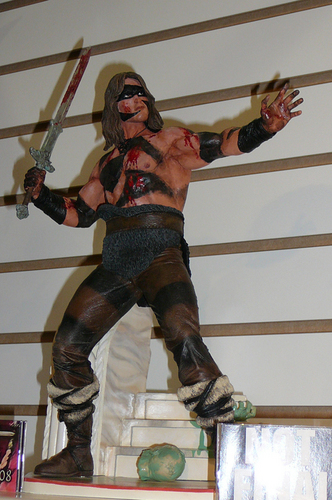 It?s kind of insane that it?s taken 25 years for a toy company to make action figures of this definitive sword-n?-sorcery flick, and the film that launched Ahnuld?s career. Still, as the picture of this warpainted Conan shows, it was worth the wait to have NECA do the toys. Here?s hoping for a James Earl Jones in Incredibly Embarrassing Thulsa Doom Costume and Brigitte Nielsen as Red Sonja with Last Moments of Attractiveness accessories. 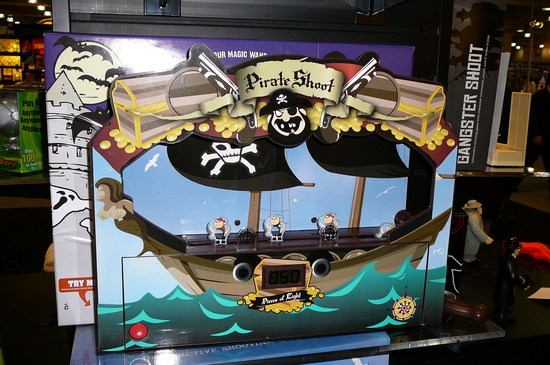 Oh, you kids today, with your Xbox 360s and your Wiis and your klong hair. Don?t you know that it?s the shooting people that?s important, not the graphics? This incredibly awesome mini-shooting range?succinctly but accurately titled Pirate Shoot?adds to the fun by letting you mow down waves of adorably marauding pirates with the pistol accessory. 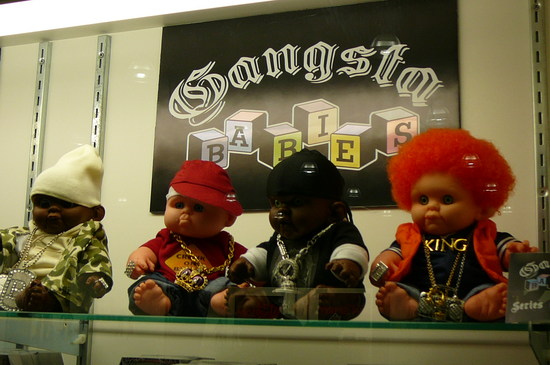 There?s nothing I can add to the picture of these dolls, other than if you sing ?gang-sta bay-bees? in the same tones of the Muppet Babies theme song, it?s pretty fucking hysterical. 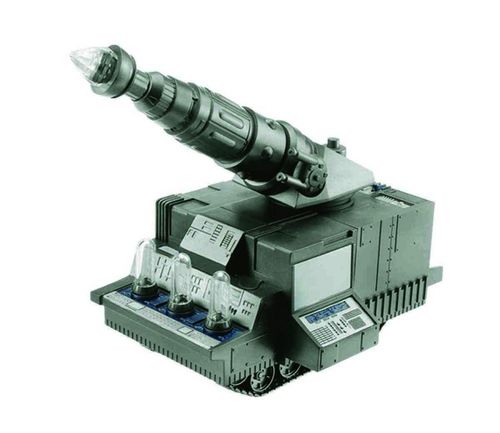 It?s been a mere 23 years since the first five-part GI. Joe cartoon aired, and only now are we getting figures from it. But with its four figures?including the aforementioned sexy Baroness in a wet-suit, a swell Cobra Trooper and Stalker, and a glowing-from radiation-poisoning Snake Eyes (needs soup stat!)?this set is an incredible commemoration of one of the defining moments that made us continue to be nerds today.

Okay, another repeat. But c?mon?it?s the Ark of the Covenant! Complete with the Nazi-killing spirit of Death himself! FOR PRE-SCHOOLERS. I pray for a child, so I can buy this for him, and when he asks why the Ark has a ghost in it, I can sit him on my knee, look him in the eye and say, ?Son, God hates sodomy, Nazis and people who look in his boxes. So say your prayers or he?ll melt your face off. Sleep tight!? 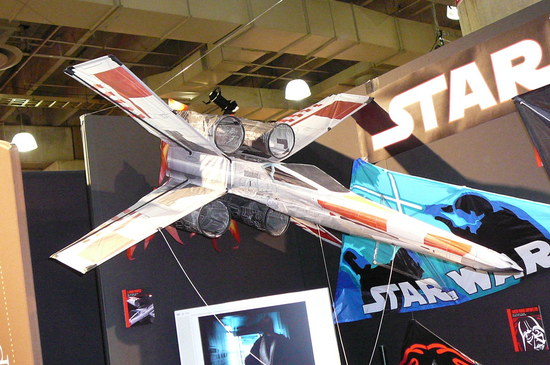 I?ve often mentioned hating the young for having some of today?s cool toys, but this kite is so phenomenally awesome I?m buying it anyways, my incredibly inappropriate age be damned. It?s about three feet long, and actually makes me shiver in delight to imagine flying it on some sunny day, as it looked pretty badass ass even hanging in this booth in the Javits Center. 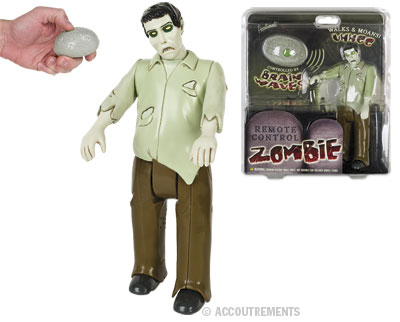 You drive the near-8-inch zombie. With his brain, which houses the remote control. 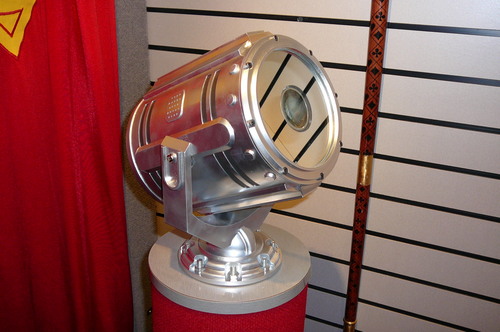 Finally, something for us old, cranky collectors! It might not look like much in this picture, but let me assure you how much you want this. This Bat-Signal is the prize piece of DC Direct?s upcoming Trophy Room collection, and it?s made of stainless steel, and can project Batman?s logo up to 16-feet away. Frankly, it?s so high-end and well made it actually ceases to be hideously nerdy, which is a miracle. 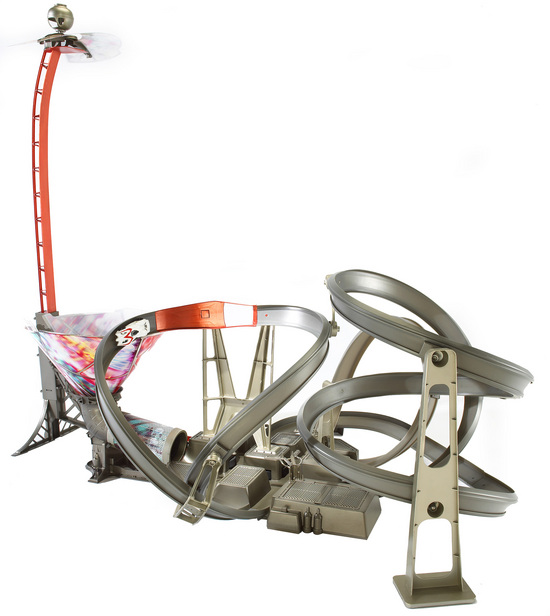 While the obese, bearded nerd-journalists ogled the Dark Knight toys at Mattel?s Collector Press event, I wandered over to the Speed Racer movie room, and checked out the Speed Racer Hot Wheels. A kind young man in a Speed Racer outfit showed me some of the cars, and when he got to this track, I was absolutely transfixed. All you have to do in through a car in the funnel, and it goes flying around the track; at the end, the car is actually shot about two feet into the air, then it lands back in the funnel, and it propelled forward again. You can put in dozens of cars, and the cars crash spectacularly in the criss-cross section. The dude and I kept feeding cars in the funnel until I managed to use one car to hit another car as it had been launched into the air, sending it flying across the Mattel showroom. The guy and I yelled simultaneously in victory, and gave each other a high-five?and it dawned on me that we, two adults and paid professionals, had been playing Hot Wheels together for the last five minutes. In summary, this thing is fucking awesome. 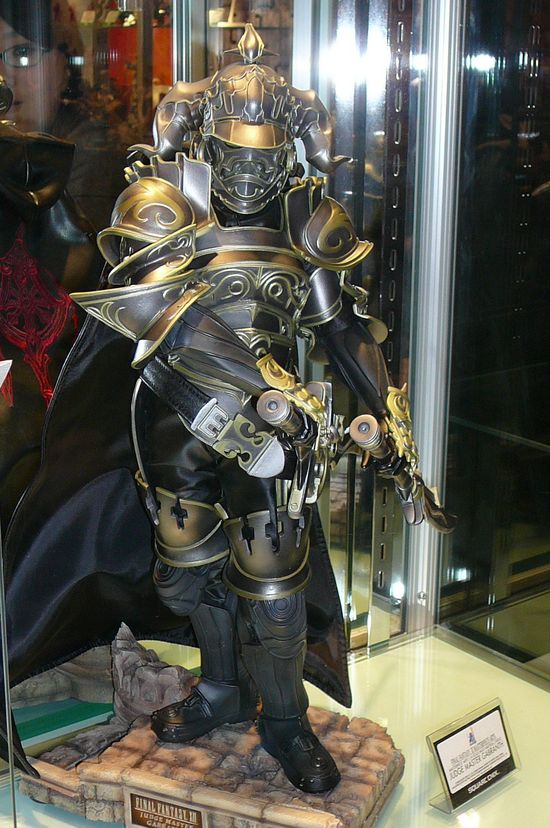 Final Fantasy XII was kind of ennh, so you have my word that this toys is not #1 because of my unnatural carnal lust for most things Final Fantasy, but because it?s really that spectacular. Over a foot and a half-tall, this figure of Judge Gabranth is not only effectively covered in dozens of individually crafted pieces of metal, leather, PVC and resin, but has an hand-embroidered cape, too (look at his reflection on the left). Even if you loathe Final Fantasy games, to see this figure in person is to gape in amazement at its craftsmanship. To own it is to pay $400. But you and ever one else who sees this bad boy wil be able to tell where every dollar went.