It wasn?t that long ago that having a geeky T-shirt was a sign of failure and social incompetence. Best represented by the armpit-stained Punisher logo T-shirt favored by portly comics nerds the world over, any nerd who wanted to keep a modicum of self-respect had to forgo the geeky t-shirt, and simply reveal his nerdy by talking about Star Wars in mixed company.

Now, things have changed. The advent of nerds being cool has led to some truly cool?but still nerdy?T-shirts, available from nerd artistes across the internet, and ones any nerd should be proud to wear. Here are the 20 greatest shirts for nerds that look great, don?t automatically prevent you from getting laid, and are kind of stylish to boot. 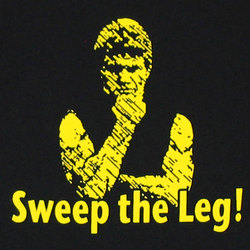 The Cobra Kai dojo from The Karate Kid has become a universally recognized symbol of evil, with John Kreese as the unholy cult leader. But to boil the dojo?s complete lack of honor down to those three words?three words that, when spoken by Kreese, actually cause ?80s teen bully William Zabka to seem like a sympathetic character?is to create pure, concentrated evil. If this shirt were a portal to another dimension, Kreese would be General Zod, waiting to be unleashed on the world. Geeks, be afraid. 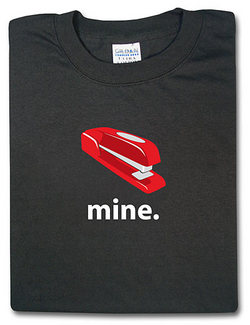 Office Space is another cult film that has been embraced by the unwashed, working masses, so a shirt needs to do something special to call itself geeky. By focusing on the red stapler that changes hands in one scene, unwittingly setting in motion events that will bring the film to a smoking finale, this ThinkGeek shirt has summed up a great film in one single piece of flair. And if you don?t get THAT reference, then this write-up is geekier than I thought.

18) You Sank My Battleship

While board games are fun for the whole family, some are geekier than others. Battleship, in its pre-1941 and Medal of Honor halcyon days, was the best military simulator on the market, and this Threadless shirt puts the game into a real-life context, placing the pegs in the bomb bay of a Japanese Zero. Not only that, Japan is clearly winning, which may be why the shirt has a distinct rising sun motif. It takes a true geek to turn pegs into propaganda. 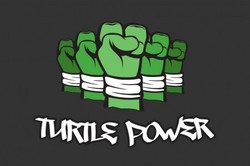 Take popular 1980s cartoon slogan. Reinterpret it as a call to arms for disenfranchised amphibians. Await the revolution. 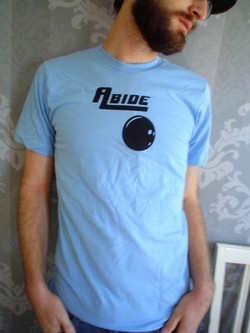 Once considered cult, The Big Leboswki has become fairly ubiquitous, thanks to a toy line, regular Lebowskifests and the annual recruiting of new youths into the drinking and drug culture. So Supastarr?s shirt, which celebrates bowling and minding your own business (the two central tenets of Lebowskism) while eschewing a massive Dude or Walter head, is refreshingly geeky. There is another shirt out there with a massive John Turturro head on it, licking a bowling ball, but that?s not geeky?it?s just incredibly sexy. 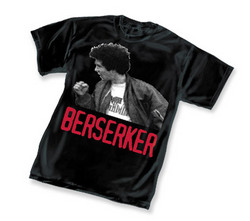 Liking Kevin Smith is still geeky, right? Did Jersey Girl change that? Say what you will, but being able to quote Clerks verbatim, especially song lyrics sung by a Russian metalhead named Olaf, is geeky. Wearing a shirt with said song title on it, and a picture of a character who appeared on screen for approximately one and a half minutes and only appeared in one other movie ever, is geeky. Because the only people who know what the hell that?s about are huge geeks?specifically, Kevin Smith. 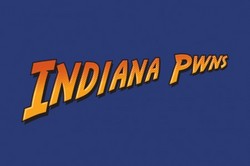 Someday, there will be an Indiana Joes MMORPG. Picture an online world populated entirely by whip-carrying archaeologists, who traverse a digital globe, stealing artifacts from each other?s museums, killing Nazis and Indian cultists left and right. On that day, this pun will be a headline somewhere, but then, that?s the future, when everyone speaks in IMs. Until then, Busted Tees makes the list for mixing 1940s-style adventure with 2000s-style escapism, creating a joke shirt that is hysterical to the few, the proud, the geeks.

13) The Batmobile Lost a Wheel

Everyone knows the juvenile alternate lyrics to the already fairly juvenile ?Jingle Bells,? wherein the Batmobile suddenly finds its tires decreased by 25% and the Joker makes a timely escape. But for an artist to take the time to illustrate a sad, detailed picture of that tragic winter?s night is the epitome of geekiness. To wear it is to say that you?re a fan of Batman OR a fan of nontraditional Christmas carols?either way, you subscribe to a newsletter, and are a geek. 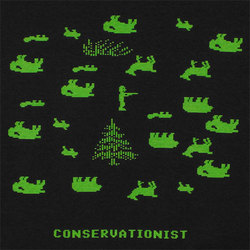 You will notice that there are no Mario T-shirts on this list, mainly because Mario has crossed over into a mainstream realm where any jackass with access to a Nintendo (or memories of access to a Nintendo) owns a Mario shirt, and all of the other mushroom-eating jackasses laugh at it. This shirt not only celebrates the obscure Atari game Oregon Trail it makes a joke about the massive body count in the game, without even mentioning the game?s title. That shit is hard-effing-core. [Editor?s Note: Mario is still awesome.]

11) Joss Whedon is my Master Now

Assuming that the average person on the street knows who Joss Whedon is (and that may be assuming too much), it?s easy for them to translate this shirt?s message: you appreciate the work of Joss Whedon. But to truly grasp the meaning behind that statement, to parse the font and the language to recognize this shirt as a rejection of George Lucas and his Star Wars mythos?that takes a geek of a different color. 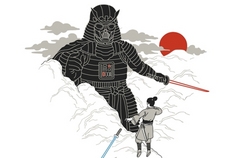 Although Star Wars shirts are often still too geeky for most folk to wear, there are exceptions. Anything directly from the movie is out. But placing Darth Vader in the context of traditional Japanese woodblock prints? Awesome. In Japan, they actually make collectible, Darth Vader-themed samurai armor not unlike what?s shown here, so maybe this wouldn?t be geeky in Japan. But in America, where a giant Vader has never menaced a Tokugawa-era nobleman? Awesome?and geeky?as hell. 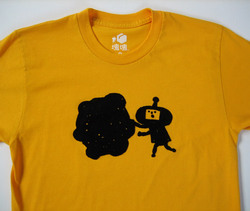 You certainly don?t have to be a geek to enjoy Katamari Damacy, but it doesn?t enjoy the widespread recognition of, say, Metal Gear Solid. So you have to be a hardcore Damacite to wear a shirt showing a fuzzy silhouette of the Arkanoid-headed Prince rolling up a big ball of something. Not only are you asking people to ask you what the hell it is, you?re also asking them to touch you. That makes this shirt geeky, and everyone else very brave. 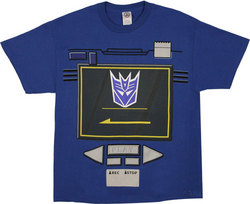 We could have theoretically filled this entire list with shirts that look like the chests of Star Wars characters or superheroes, but most of them are fairly recognizable. This shirt, however, depicts the chest of a Transformer who has been, for all intents and purposes, retired for having a dated alt mode: a cassette player. True, he?s still a popular character, but only fellow G1 geeks will recognize this shirt, let alone how cool Soundwave?s chest is in particular, being full of tiny cassette robots and all. 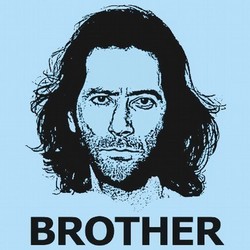 Unless you?re a fan of Michael Ian Cusick from 24 (unlikely) or even the movie Hitman (VERY unlikely), you need to be a Lost fan to recognize the Scottish ex-monk Desmond on this shirt AND to know how to correctly pronounce the word brother. (It?s bruthuh.) In that way, this 24/7 Magnum shirt actually functions as a geek detector: everyone will say Brother to you when you wear this, but the one who says it with a Scottish accent is the geek.

If you prefer your Law & Order with more raped babies and old people, you?re likely watching Special Victims Unit. While the original L&O-philes can enjoy the Batman walking with Sam Waterston T-shirt from Brandon Bird, SVU fans should definitely visit Serineery Tees‘ wide array of Law & Order: SVU shirts, including this geeky shirt which simply depicts department psychiatrist George Huang (who?s not even in every episode) and the word psych, leaving it to the beholder to put together the facts of the case. (Hint: The biggest guest star in the episode is always the perp.) 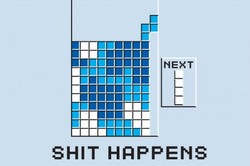 Shit does indeed happen: in fact, awesome fucking shirts fucking happen, okay? Busted Tees took a video game based on geometric configurations and the frustrations that develop during normal gameplay and made it into an amazing T-shirt. Yes, everybody has played Tetris, so everyone will understand this shirt, but for being possibly the only Tetris shirt ever made, for making a joke about excessive line-building and for including a totally gratuitous obscenity that doesn?t even BEGIN to explain the rage this sort of scenario would cause, this shirt is truly geeky, or as the Russians would say, geekski. 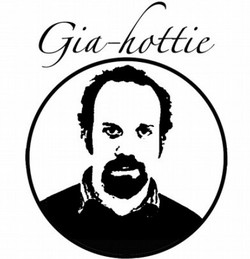 Shirts of musicians are omnipresent, and you can?t throw a rock at the Internet without hitting a Chuck Norris T-shirt?and breaking your computer. But while there are entire magazines dedicated to film and TV celebrities, there are very few shirts that put them up as worth of idolatry in their own right. Paul Giamatti is that rare bird who is equally great in every role he plays, and equally sexy in the eyes of intellectual ladies everywhere. For targeting such a narrow slice of the populace (intellectual, Giamatti-loving ladies), Hobocamp has achieved geek splendor. 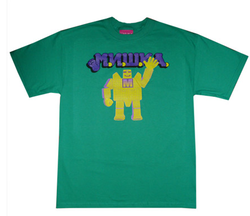 NYC boutique Mishka has six letters in its name. So does M.U.S.C.L.E., the 1980s line of little pink figurines from Japan. Not only do you need to recognize the logotype on this shirt to get the reference, you need to recognize the M.U.S.C.L.E. toy shown?and it?s not even pink! Mishka actually offers a pink-on-white version, but this one gets extra geek points just for showing a yellow Sunshine?how he appeared in the original Kinnikuman cartoon and comic?which is something only a Kinnikuman geek would know. (Yes, I am a fellow geek.)

Van Halen has always been a little geeky, thanks to the antics of David Lee Roth and the band?s refusal to take itself seriously, and the Roth-spoken line ?I don?t feel tardy!? is a bit of comic minutiae from Hot for Teacher, one of their best (and funniest) songs. And Doctor Who is the general practitioner of geeks everywhere?even now, when he?s arguably at his most popular, the non-geek American public knows next to nothing about him. It?s an obscure reference combined with a small visual gag (Roth leaping over the Tardis), which adds up to cross-cultural geekiness.

Yes, yes, we?ve all had enough of the Che Guevara-style revolutionary shirt, but it all depends on who?s in the beret. Corey Feldman? Eh. Patrick Swayze? Meh. The mustachioed face of Mario himself? Feh. But to make a shirt with the face of the creator of Mario (and Donkey Kong and Link and Star Fox and Nintendogs and the frickin? Wii) shows that you are a hardcore Nintendo geek looking to meet other people who can recognize Shigeru Miyamoto by sight. Good luck with that.