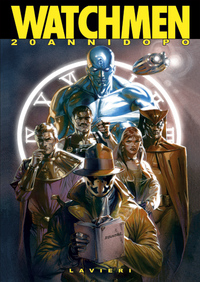 Answer: Fox! I have no more than a passing interest in the Watchmen movie, which why I find it cruelly hilarious that ol’ 20th Century Fox has sued Warner Bros. to halt the production of the Zac Snyder-directed Watchmen movie. The reason are stupid and very legal, so I’m just going to cut and paste what ICV2 says:

According to Fox the studio acquired all movie rights to the Watchmen property between 1986 and 1990. Though it did assign some rights to producer Lawrence Gordon’s Largo International, Fox claims that it kept the right to distribute any Watchmen movie. When Largo folded, the agreement between Fox and Gordon was amended with a number of conditions, but according to Fox, Gordon was supposed to pay the studio a buy-out fee if he decided to make the film elsewhere?and Fox claims that it has never received any such fee.

They raise a good point at the end of the article, tho’: while millions of fanboys are crying in anguish that the long, long-awaited Watchmen movie might be delayed or even canceled, creator Alan Moore?who hates Hollywood with a passion and hates the idea of a Watchmen movie even more?must be laughing his ass off.